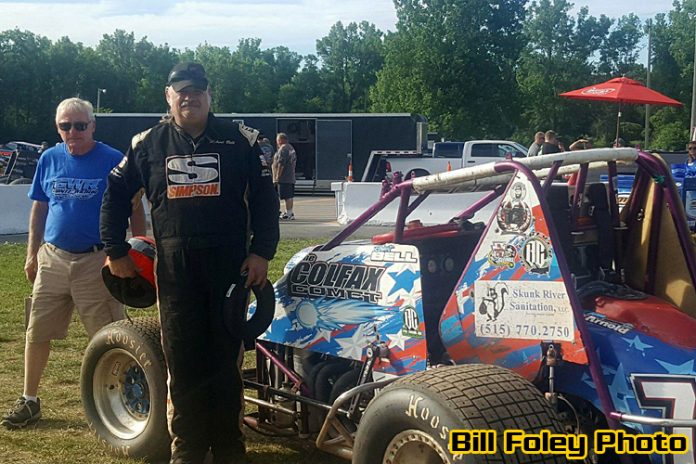 The personable Bell sat on the back of his hay trailer and talked with Dirt Track Digest about why he does what he does.

His “rig” immediately attracts attention when he arrives at a speedway as he explained, “I have a half ton ’97 Chevy pick up that was given to me by Colfax Tractor. It had 190,000 miles on it when they gave it to me and now it had 331,000. Our trailer is an old hay trailer that I use to haul hay for cows and horses. I have an old Eagle chassis Sprint car that is probably about 15 years old and run a Lee Nelson Ostrich Race Motor which has about 800 horsepower.

“I love this sport and the crowds keep me coming, I love them, “ said Bell.  “I think they see me as a lovable, die hard person and when they see me out there I think they believe they can also do it. I just love what I do.”

“Passion” would be one word to describe the travels and determination of this Colfax, Iowa driver.

Bell noted, “I have been racing Sprints since 1992 and ran Knoxville for 22 years including 17 straight years of perfect attendance there. I started running wingless and there is no way you will ever change me. This is a dream.”

Why he left Knoxville, from his home 25 miles east of Des Moines, was pretty simple. Bell noted, “It just got to be too much money. I can run this car and could get 35 to 40 nights on the engine before I have to rebuild it and at Knoxville you would have to do that every 10 shows or so.”

He knows he’s an underdog whenever he hits the track with the USAC nomads, but simply noted, “You have to race and adapt. No one has been here at Weedsport before. We all have to run the same surface.” In a show of respect he gained the pole for his heat race and went over to talk to other drivers in the race explaining how he was going to drive it so there would be no surprises.

The Eastern Storm tour has been interesting to say the least for the driver and one crew member.

He started out in Colfax and headed to Loganport, Ind., to pick up 72-year-old Gary Miller who would accompany him throughout the tour of Pennsylvania, New Jersey and New York.

Gary said, “I met him at Ocala a couple of years ago. He was headed south for the show when his radiator hose went. He didn’t have an extra hose so he cut off the top of the jack and found a way to attach that to the radiator to get him to Florida. We met and I’ve been traveling with him for Indiana Speed Week as well as Eastern Storm and a few other times. It’s been fun.”

His open trailer and car attracted plenty of attention this past weekend at Port Royal where USAC was joined by Vintage cars.

Robert said, “When I pulled in the officials wanted to put me in the vintage car pits, but I told them I was with USAC. It took a while, but we got to the USAC pits when another golf car comes up with an official and he tells me ‘Vintage cars don’t park here.’ I explined to him I was with USAC and he went away. A few minutes later another golf cart comes up and tries to move me to the vintage pits. Once again I told him I was with USAC and had a license. It happened once more and I was getting a bit irritated, but finally they figured it out.”

He feels good about Eastern Storm and said, “I came out here in ’15 and in seven nights didn’t qualify for a show. This time I made four races.”

Robert Bell was the All Star Midget Champion in ’16 and even won himself a heat at the Chili Bowl in ’17.

He’s a farmer, owns a trucking company that serves only farmers, and is even a promoter who hopes to have a USAC sanctioned show in Iowa next year.

Bell, who runs the majority of the USAC Sprint National Tour, concluded, “I love what I do. I make more money racing than I do farming. I do this because I simply love it. There is nothing better.”

So on Sunday night as the more competitive teams loaded their toters there was Bob, Gary and a couple of other guys rolling the 71 onto the back of his hay trailer.

While many teams headed home he sat there waiting to see if any fans would visit.

It was then time to travel 10 hours to drop off Gary in Indiana and drive solo the last eight hours to his farm in Iowa to await the next time he would hit the road to live his dream.