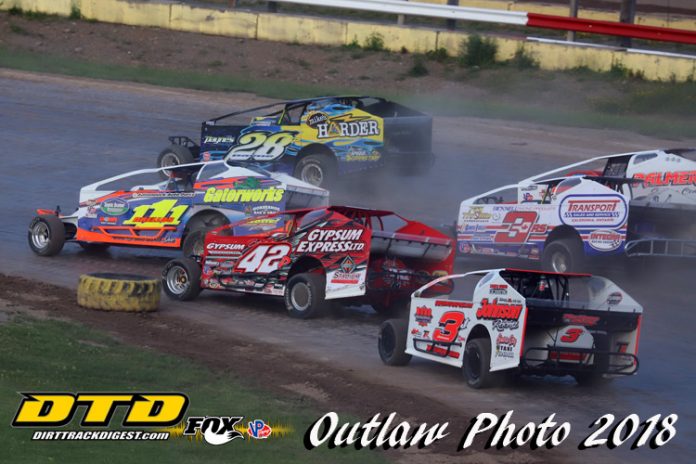 VERNON, NY – After an exciting night racing this past Sunday a month long hiatus due to inclement weather, Utica-Rome Speedway is ready to get right back in action this Sunday June 24. The King of Dirt Series 358-Modified Series will be in action, paying $2,000 to win for the winner of the 40-lap main event. Also, on the card for the action packed night of racing will be the King of Dirt Sportsman Series, paying  $1,000 to win, plus the King of Dirt Pro Stock Series that has a $600 payday. The Rookie Sportsman will join in on the fun on Community Car Wash and Wilber Duck Chevrolet Night.

After his opening night King of Dirt 358-Modified Series win at Devils Bowl Speedway, Bobby Varin comes into this Sunday’s event as the point leader with Jeremy Wilder, Marc Johnson, Steve Bernier, Demetrios Drellos, Matt DeLorenzo, Don Ronca, Jessey Mueller, Rocky Warner, and Frank Hoard III filling out the top ten in series standings. In the weekly Utica-Rome Speedway, Billy Dunn is the point leader in the chase for the $5,000 track championship ahead of Wilder, Erick Rudolph, Johnson, Pat Ward, Warner, Jack Lehner, Varin, Bobby Herrington, and Lance Willix. Another star studded field is expected to be on hand this Sunday as drivers look to grab the $2,000 top prize. Last season, Rudolph and Matt Sheppard each won in the pair of King of Dirt 358-Modified events at Utica-Rome Speedway.

This Sunday will be the opening event of the King of Dirt Pro Stock Series with many of the top local Pro Stock teams expected to compete for the enhanced purse. Defending track champion Mike Welch will the UR faithful into Sunday’s event to take on the travelling starts. Travis Welch, Shane Henderson, Bill Knapp, and Mike Kazlauskas round out the current top five in track standings. Last season, Rob Yetman and Chuck Dumblewski each won in the two appearances by the King of Dirt Series.

Due to the slight rule differences and the King of Dirt Series not being DIRTcar sanctioned events, the DIrtTrackDigest.com 358-Modifieds, Broedel Energy Sportsman, and Ted’s Body Shop Pro Stocks will receive show up points only towards their respective point standings.

The Rookie Sportsman will round out the evening’s activities. Addison Bowman and Ted Starr have each one event each in the division that is growing weekly.

Pit gates will open at 3 p.m. with the grandstands opening at 3:30 p.m., with racing set to begin at 6 p.m. Adult admission will be just $18 for the huge night of racing with Seniors, Students, and Military being admitted for $15. Kids under 16 will be admitted to the grandstands for free.