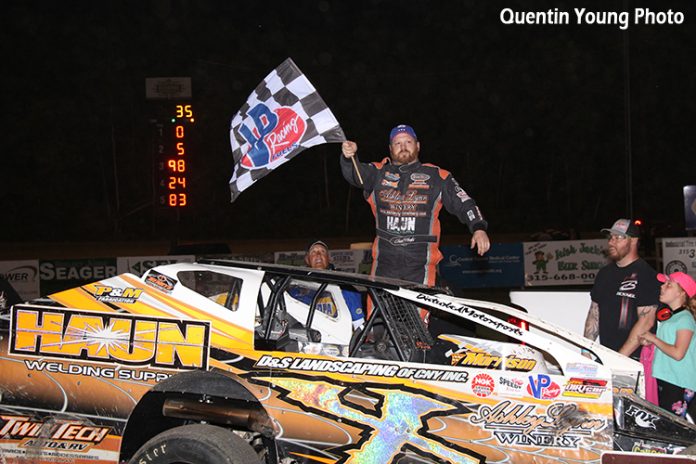 It’s been a tough year for Modified driver Chad Phelps. The only kind of luck it seems he can muster up is bad luck. He’s had some gremlins pop up here and there while also completely totaling a car while competing at the Weedsport Speedway. The highlights have been few and far between.

Friday night at Brewerton Speedway things finally turned for the better for Phelps. The Oswego, N.Y., driver got up on the wheel late to get the lead in the 35-lap feature from Jim Witko on a lap 31 restart. He led the final four laps in a car that he “pulled out of the weeds” after the Weedsport incident for his first win at the speedway since May 31, 2013.

“This feels really good,” stated Phelps. “I’ve been chasing it for a long time here. In 2013 we were really good here. The last few years we’ve been so close so many times. There were a lot of seconds, but we never could capitalize on it. For the start of year we’ve had and year we’ve had, we really need this. It helps out financially for sure. We basically pulled this car out of the weeds after Weedsport. This car is a little older. It’s been a good car. To win you got to be in the right spot and luckily we were.”

Phelps was provided his shot at victory when Ronnie Davis III spun in turn two. That bunched the field up one final time. Phelps stayed tight to Witko for the green. Some incidental contact was made before a door was opened allowing Phelps slide his way by Witko on the bottom of turns one and two.

“The 24 (Witko) didn’t get going on the restart,” commented Phelps. “I got into him, backed off and let him straighten out. If not it could have wrecked both of us or who knows what would have happened there.”

When Phelps saw Witko miss the lane going into turn one he knew that was his opportunity. He had to take a chance and fill the hole if he wanted a shot at the win. He did just that. The pair raced even off of turn two down the backstretch with Phelps in the preferred lane on the bottom in turns three and four. That was the difference.

“You do that and you are a sitting duck,” mentioned Phelps when asked about Witko missing the bottom. “You know you did it as a driver. You are waiting for them to freight train by you. He did it a few times and I wasn’t close enough to capitalize. That time I was close enough. I messed up a few times myself. I was right there at the right time. The restart bunched us up a little bit and you got to go after it. It was a good clean pass. He slipped up and we got by him. He didn’t make it easy on me. He kept me close down there to the tires, but I wasn’t going to give up and I know he wasn’t either. You got to go for it.”

With the year he’s had, the win was something everybody on the team needed. When a season goes bad for so long it can really wear on not only the driver but the crew. This win doesn’t fix all the problems with the season, but it certainly gets things headed in a more positive direction.

“This is good for everybody,” concluded Phelps. “It is good for morale. There were times this year that I wasn’t sure if I wanted to keep doing it with the way the luck has been going. I don’t give up, I keep going and keep fighting. Hopefully there are more to come.”