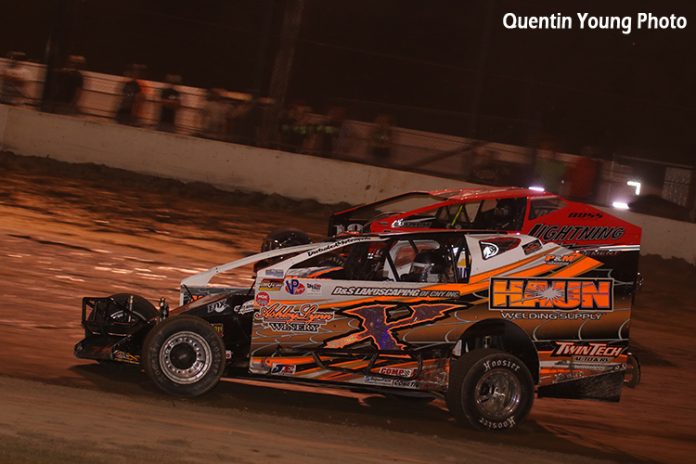 BREWERTON, NY – Chad Phelps has had a year to forget up until tonight. However, the bad nights don’t feel so bad when sitting in victory lane. Using a late restart, Chad Phelps grabbed his first checkered flag of the year at Brewerton.

Driving one of the few small-blocks in the field, Tyler Trump paced the pack early in the 35-lap Modified feature. Trump led until a lap seven caution for a spinning Ronnie Davis III, where on the restart Chris Hile used a slide job in turn one to take the top spot. Other than for a slide job, Hile was determined to not leave the cushion as he motored away from the field.

Hile’s lead shrunk as fast as it grew, as Jim Witko was making ground down low. On lap 15, the lone Pennsylvania driver in the field in Witko got a good bite off of turn four and was scored the leader at the line. However, Witko wasn’t able to walk away from the rest of the frontrunners, as the top four of Witko, Hile, Phelps, and Max McLaughlin were under a blanket at halfway.

Phelps’ line was a mirror of Witko’s, running inches away from the infield tires. This line allowed Phelps to sneak under Hile and into second, hanging within a couple car lengths of Witko. The front of the field ran status quo until a pair of late cautions set up a five lap dash to the checkered. Chad Phelps got a better restart than Witko, and Witko slipped up entering turn one. Phelps darted to the extreme bottom of the track and found just enough space to squeeze by Witko and into the lead.

Once Witko fell back into second, things suddenly weren’t so fun. Hile rolled around the outside, and Jimmy Phelps went downstairs to knock Witko back to fourth. However, this was all behind Chad Phelps, who ran a handful of flawless final laps to score his first win of the year. Chris Hile, Jimmy Phelps, Jim Witko, and Tim Sears Jr. completed the top five.

“I didn’t know I was going to get him (Witko), he was running real good,” Phelps said. “He slipped up, and that’s all I needed. The car was working pretty good, and man, this year has been horrendous up until now. Hats off to Jim, he ran a heck of a race, but he didn’t fire well on that last restart.”

The first Sportsman feature saw Corey Barker dominate the majority of the event, with a steady lead over Chris Hulsizer. A caution with six laps to go set up a single file restart, but the front of the field jammed up and Barker was turned around before he ever got to full throttle. While no damage was done, both Hulsizer and Barker were sent tail. This handed the lead to Nick Krause, who ironically was sent tail while leading last week. Krause then promptly walked away from the pack to score the victory.

That’s where the fun stopped. Rain hit, and the second Sportsman feature and Mod Lite event will be ran next Friday night.

Last week, the second Sportsman feature was postponed on lap seven of 25 due to a blown generator. Racing resumed this week, and it was Alan Fink driving around Tyler Thompson and setting sail to dominate the second half of the delayed event.

The Late Models made their second appearance of the year at Brewerton with a 20-lap main on the card. Jason Parkhurst led the majority of the distance, but eighth-starting Dale Caswell snuck under him with five laps to go then masterfully worked through traffic to pick up the close win.