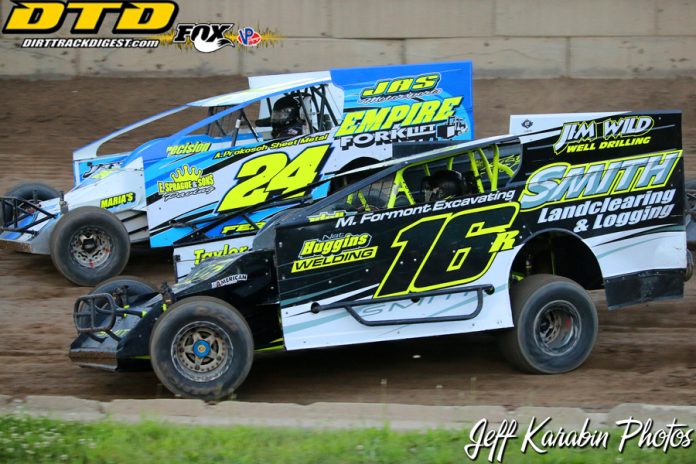 ACCORD, NY – Accord Speedway Promoters Gary and Donna Palmer have kept pace or possibly even a step or two ahead of the weather in 2018 and the racing has been beyond spectacular with both track regulars and newcomers enjoying the spoils of victory in the WRWD Radio Victory Lane.  The Palmer Family presented a six division show on Friday evening that went off like clockwork.  The weather cooperated fully and the picture perfect scenery of the Catskills Mountains scenery continually makes the trip to the speedway a pleasant experience.  Friday night produced another of those great nights as another great crowd was on hand to enjoy the evening of speed sponsored by the good folks at Kingston Nissan.  (www.kingstonnissan.net)

Eddie Burgess and Kenny Ferrier brought the field down for the start of the Insinger Fuels 30-lap headliner for the Modifieds.  Ferrier found daylight off of turn two and grabbed the lead with Burgess, Jesse Marks and Joe Judge in tow.  Ferrier was able to build a good size lead until the first caution came out for a spinning Nick Johnson. On the restart Ferrier again pulled away while Burgess settled in to the runner-up role. Behind the pair, the action was sizzling with a trio of hot rods making their way through the field to contend. Jimmy Wells led the group of hopefuls to the front and he battled hard with each pass he made as the real estate was at a premium. Anthony Perrego and Jerry Higbie were changing lanes at will as they moved forward.

With ten laps remaining, Ferrier began to find slower traffic and with fine precision was able to slip past them with Burgess moving closer to Ferrier as the remaining laps clicked off.  Ferrier was not to be stopped on this night as he flashed under the checkered flag with Burgess in the runner-up role in an excellent ride. Wells would finish third in his Upstate Auto wagon with Perrego and Higbie completing the top five.  Mike Ricci headed up the second five with Joe Judge, Jesse Marks, Rich Ricci Jr and Allison Ricci completing the top ten.

The Arkel Motors Sportsman event found polesitter RJ Smith hustling into the lead at the drop of the green flag. Smith found the track to his liking and would lead through the first twelve laps of the event. On lap-13, Cole Hentschel worked the baseline to perfection and slipped past Smith and also brought along a dance partner in Kyle Rohner. The remainder of the event found Rohner making a couple of bids for the point but Hentschel was able to defend his position and would go on to capture his first win of the 2018 season. Rohner would finish second with RJ Smith third in a great run, Danny Morgiewicz fourth and Tyler Johnston finalizing the top five.  Heading up the next five spaces were Mike Senecal, Leo Fotopoulos, Chris VanDuser, Matt Shultz and Anthony Recchio.

Charles Loiodice raced into the lead from outside pole at the start of the WRWD Radio Rookie Sportsman headliner. Loiodice had a great car under him and clocked of the fastest time of the night going 13.741 seconds.  A couple of scrambles slowed the field  in the early laps but once settled in the rookie stars put on a great show with Loiodice in a league of his own on this night and walking away with his second win of the season. Travis Green hustled to second with Cole Stangle third. Samantha Muller was involved in a couple of those scrambles but worked her way back to fourth place while John Brown completed the top five. Robbie Colbyrn finsihed sixth while Mike Travis, Erin Paulison, Jared Miller and Kyle Swart completed the top ten.

In the Upstate Auto Pure Stock event, Travis Brockner seized the moment as he took control of the point at the start and would lead all of the way to gain his second feature win of the season. Livy Johnson would settle for runner-up honors while John Drake, Emerson Cargain, John Hechinger, Ray Tarantino, Steve Williams and Rich Scott followed.

Mick D’Agostino would jump into the lead off of turn four at the start in the WRWD Radio NEWS Sprint feature. D’Agostino would lead all of the way as he withstood many challenges from Bobby Tersillo to go on and secure his third win of the season at Accord. Things did not go well for Tersillo, however, as while racing in second spot on lap-19 Tersillo tried to make a move on D’Agostino that didn’t pan out and Tersiilo’s hot rod went over, under and sideways down in a spectacular series of flips on the frontstretch and coming to rest in turn one.  Tersillo was okay from the scary incident but the racer suffered heavy damage and was cradled off the racing surface. Jordan Lawrence would finish second in his best run to date while Mike Traver was third, Dan Malley fourth, and Mark Conolly fifth.

In the Fireballers feature, Richard Smith was the early leader until he hit the unforgiving backstretch boiler plate and sent his right front tire down the track without him. ED King inherited the lead but would give way to the high flying Jerry Kingeter. Once in front,  Kingeter checked out on the field and raced to his fourth win of the season. King would finish second with Brandon Conklin, Anthony Tarantino and Nicole Nelson completing the field.

The hotly contested racing action was completed at 10:39 PM.

New additions to the speedway included Mike Kolka and Steve Davis in the Modifieds. DAvis had a great run going in his first time back in two years but he was debuting a freshly minted race car and broke off a shock mount while threading his way through the field. Kolka was an early departure in the feature. Kolka was in a Everett Haubrich owned racer.

Joe Toth was on hand, making the tow up from Lower Makefield Township on the outskirts of Philadelphia. Joe had competed at Accord in the past in the Slingshots but if not mistaken took his first tour in a full sized race car. Hunter Lapp returned to action after missing a week due to a health issue. Hunter explained he is feeling good and was happy to return to the racing wars.

Kyle Swart was a new addition to the Rookies.