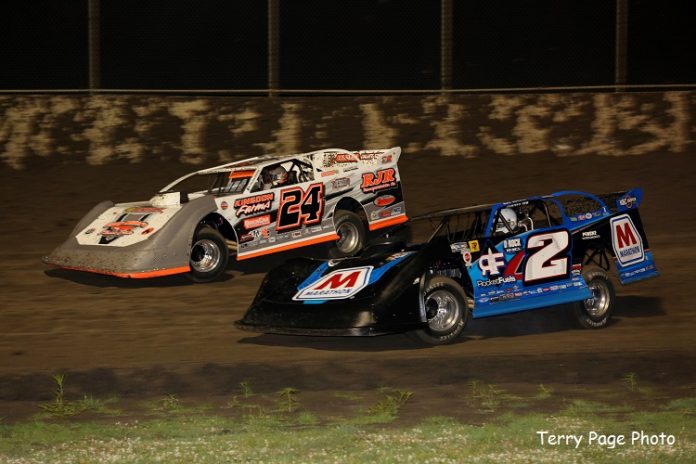 GRANITE CITY, IL — Surviving high-speed, rugged conditions after a wet week in Illinois, Ryan Unzicker of El Paso, Ill., regained the lead from Brian Shirley on the 20th lap and led the rest of the way Friday at Tri-City Speedway. Unzicker earned $10,000 for his 10th career DIRTcar Summer Nationals victory.

Unzicker started outside the front row and led the first seven laps before Shirley took command, but Unzicker handled the rough surface well enough to get back past Shirley by the halfway point. Unzicker went mostly unchallenged except for a few charges by the 20th starting 32 car of Bobby Pierce.

Unzicker took the checkers eight-tenths of a second ahead of Bobby Pierce of Oakwood, Ill., while 12th-starting Frank Heckenast Jr. of Frankfort, Ill., finished third. Series points leader Shannon Babb of Moweaqua, Ill., driving a backup car after a heat race crash, was fourth with Rusty Schlenk of McClure Ohio rounding out the top five.

Eight drivers were running at the finish as several drivers elected to park early.

Shirley, of Chatham, Ill., led laps 8-19 and was running third when he slowed on the backstretch with significant right-front damage on the 30th lap.

Billy Moyer ,who entered the event 2nd in Summer Nationals points, ended up 15th after transferring through the b-main earlier in the night.

Front-row starters Tony Jackson Jr. and Kyle Bronson both struggled on the first lap and both pulled out on lap three.

The feature was slowed by a five cautions, none for serious incidents. Tim Manville slowed for a lap-11 for the first yellow and Timothy Culp slowed running seventh on the 25th lap. Shirley drew a lap-30 caution, Tanner English spun in turn one on lap 33 and Nick Hoffman’s top-five run ended with a flat tire on lap 38.