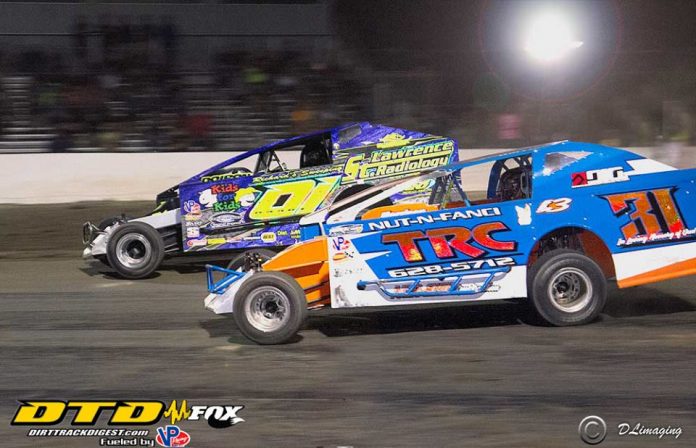 Another action packed evening saw all 5 divisions ready for battle and with some tracks taking the evening off due to high school graduations, Mohawk International Raceway was full speed ahead on G&R Auto Parts and Adirondack Auto Parts night.

Brian McDonald jumped out to the early lead at the start of the 30 lap 358 Modified feature event over Matt Woodruff, Lance Willix, Louie Jackson Jr. and George Foley. McDonald had a quick car in the early laps as he marched out to over a straight away lead by lap 5 as Woodruff and Willix had a spirited battle for 2nd. On lap 6 Willix got by Woodruff and was on the charge to try and catch the leader as Chris Raabe made his early charge to the front taking 4th with Jackson still 5th. On lap 10 Willix had run down the race leader and was pressuring McDonald for the top spot with Raabe taking the high road to 3rd as he tried to close in on the race leader. Caution lights came on at lap 11 as Keith Weston spun in turn 2. When the green came out Willix and McDonald tangled allowing Raabe to charge from 3rd to the lead heading into turn 1 over McDonald, Willix, Carey Terrance and Jackson. The caution flew again on lap 14 as Larry Welling Jr. came to a stop in the infield with a broken front end. When the green returned it was all Chris Raabe as he charged to the lead and began to put on a dominant performance with McDonald, Jackson, Willix and Terrance completing the top 5. As the laps wound down Raabe was in complete control but Louie Jackson was on the move taking 2nd from McDonald  while Tim Fuller started to make a late charge taking 4th from Carey Terrance. After 2 straight weeks of dominance it was clear that Chris Raabe was the class of the field as he marched to his 3rd win in a row in the Twin Leaf Convenience 358 Modifieds. Louie Jackson held off Tim Fuller in the remaining laps to take 2nd  while Lance Willix and Brian McDonald completed the top 5.


In the 25 lap Crossroads Tobacco Sportsman feature it was veteran Billy Cook taking the lead at the drop of the green flag over Jamy Begor, Anthony Rasmussen, Thomas Cook and Joel Hargrave. The veteran had a great car in the early laps using the bottom lane but Jamy Begor charged to the top lane to grab the lead away bringing Thomas Cook to the 2nd spot over Billy Cook Rasmussen and Hargrave. With Begor in front Thomas Cook was putting the pressure on for the lead as the field completed lap 8. Defending track champion Johnathon Ferguson had his problems on this night as he slowed to the infield off turn 4. But the next restart was when things got scary in a hurry. As the field returned to green Thomas Cook was still in command over Jamy Begor and Anthony Rasmussen. As the field worked down the back stretch Bruce Makinson made heavy contact with the back stretch wall sending hi upside down. As he landed Tommy Jock Jr. had no place to go and slammed into Makinson’s car and the red flag was displayed. After a few tense moments both drivers were reported to be ok, Makinson was taken to local hospital for evaluation. When the green returned to the field it was Thomas Cook in control again over Begor and Rasmussen. Cook would pull out to a commanding lead but behind them the story was Cedric Gauvreau who came from 10th on the grid to challenge for a top 5 effort after a great battle with Anthony Rasmussen and Jamy Begor. In the end it was a dominant win for Thomas Cook taking his first win of the year with Cedric Gauvreau charging to 2nd while Jamy Begor, Anthony Rasmussen and Joel Hargrave would complete the top 5.

Everyone was wondering when the first 2 time winner in Green’s Performance Mod Lite action would come. It would be a question that would be answered after 15 laps as Brad Reif took control of the field in th opening laps and had a strong car and a comfortable lead by lap 6. Styles Arquiett who started the season in his own Sportsman car was making his 2nd race in a Mod Lite a good one as he charged by Dan Reif to get 2nd and tried at will to run down the leader. On lap 9 Arquiett took over the top spot and was looking to run away and hide. Teammate Dan Reif started to get going towards the later stages as he charged to 2nd and tried to run down Styles Arquiett. On this night despite a late race effort it was not to be as Styles Arquiett who finished 4th last week in his debut, would march on to his first career Green’s Performance Mod Lite win at Mohawk. Dan Reif would finish a close 2nd with Brad Reif 3rd defending track champion Nick Mallette 4th and Harley Brown continued his run of top 5 finishes by taking 5th at the checkers.

Novice Sportsman saw their biggest field of the season take the green as Xavier Perrin would lead the field of 16 starters to green over Jason Rose, Gavin Riddell, Corbin Millar and Dylan Rabtoy. Perrin had a great race car at the start of the night but Rose was not letting him get away too far as he put the pressure on the Brockville native for the top spot. On lap 8 Rico Hernandez spun in turn 2 bringing out the first yellow. When the green flew it was Perrin in front but Dylan Rabtoy was on the charge and looking for his 2nd win in as many starts. The Vermont native went to work as he took over 2nd on lap 9 and put pressure on the leader. Perrin tried his best to protect the bottom but Rabtoy was a bit stronger as he took over the lead on lap 11. Once in front Rabtoy started to run away and hide and despite an effort by both Perrin and Jason Rose, Dylan Rabtoy would go 2 for 2 in 2018, becoming the first 2 time winner in Novice Sportsman. Jason Rose would edge out Xavier Perrin in a close battle for 2nd While Corbin Millar and Thomas Jock III would claim the 5th spot.

In the 10 lap Bandit feature it was RJ Tressider leading the way in the early going but he would have a fight on his hands with Zack Stone who was making his debut run and was strong on this night. The top 2 traded the lead for several laps before Stone took control on lap 6 Over Nick Perham, Gary Sharlow and Jeff Trapp. Despite many attempts to get by for the lead Zack Stone would hold on to score his first ever Mohawk Bandit win over RJ Tressider, Nick Perham, Gary Sharlow and Jeff Trapp.

Next week is a big night for the Green’s Performance Mod Lite division as the Can-Am Mod Lite Series takes center stage along with a full show in all divisions with Wild Country 96.5fm on hand. The green flag drops at 7pm.