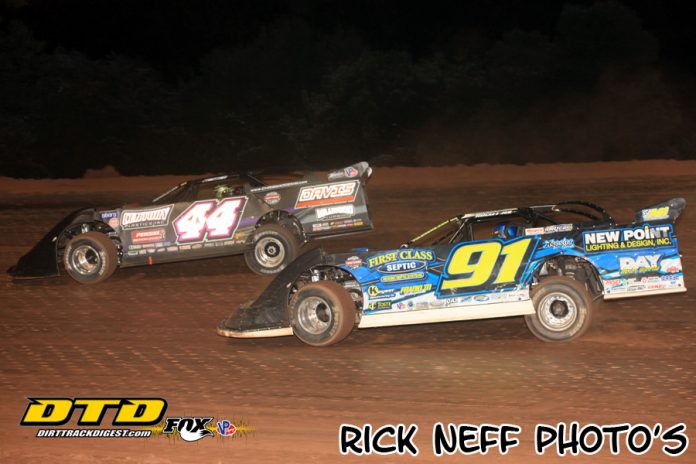 SARVER, PA – On Saturday night, Chris Madden marched to his first-career Firecracker 100 victory at Lernerville Speedway in a dominating performance by leading flag-to-flag for all 100 laps en route to a $30,000 payday.

If you just kept your eyes on Madden during the 100-lap event, it might have looked like he was on a Sunday afternoon cruise to the grocery store. The Barry Wright Race Cars No.44 had no serious challenge for the top spot and at one point held a more than six second lead over the field. Despite six cautions which erased Madden’s strong lead, the Gray Court, SC driver was able to quickly pull back away.

“When we started tonight, I think we did a little bit of a different combination there and when we fired up, I was able to run the middle of the racetrack like I was and as long as nothing happened, I knew we were going to be the car to beat,” said Madden who started on the pole of the event.”

Madden’s victory placed the perfect bookend on his 12th Annual Firecracker 100 experience. On Thursday, Madden won a 30-lap $6,000-to-win preliminary event. On Friday, he finished third in the 30-lap feature. And to conclude the three-day event, he headed back to Victory Lane once more for a coveted triumph.

“We are having a good year,” said car owner Barry Wright. “We could have been better with a break or two but Chris is doing an excellent job. My son Lance, Will and AJ, they do great work. I’ve tried this a few times up here and finally made it. It feels so good.”


The battle behind Madden was anything but a leisurely stroll. Young guns, Tyler Erb and Devin Moran were elbows-up the entire race as they exchanged the second and third positions multiple times throughout the event.

With only nine laps remaining in the 100-lap event, Mike Marlar inserted himself into the equation by passing Erb for second.  For the majority of the race, Marlar was running door-to-door with Shane Clanton for sixth but broke away from that battle just in time to make a run for the podium.

“We definitely made lemonade out of lemons there,” said Marlar. “We couldn’t get a break all night really in the feature. I would get started on the bottom there and it would get kind of breezy and as soon as I would get out of the bottom and pass those cars for positions, there would be another caution. I finally got some green flag there at the end and started to come on. Congratulations to Chris. He had a really good weekend and Barry and those guys are doing an awesome job. They’re awesome competitors.”

Headed into the weekend event Madden and Marlar were separated by only two points in the Series standings. With three more strong podium finishes for Madden and two top-five performances for Marlar, the pair now sits 16 points apart.

Erb settled for third which is his best finish of the 2018 season so far and his single top-five performance.

“It was a really really good run,” said Erb. “It was our first top-five of the year, I think. Just everything that could have, broke; and a lot of driver mistakes. I’m super happy. I love this place and the track was in good shape. So, I’m looking forward to next year… The car has been really good for the past two or three weeks, I just haven’t had much to show for it.”

The World of Outlaws Craftsman Late Model Series will take on the stars of the DIRTcar Racing Summer Nationals at Terre-Haute Action Track on June 29 and Federated Auto Parts Raceway at I-55 on June 30.

Abbreviated Results from the 12th Annual Firecracker 100 at Lernerville Speedway