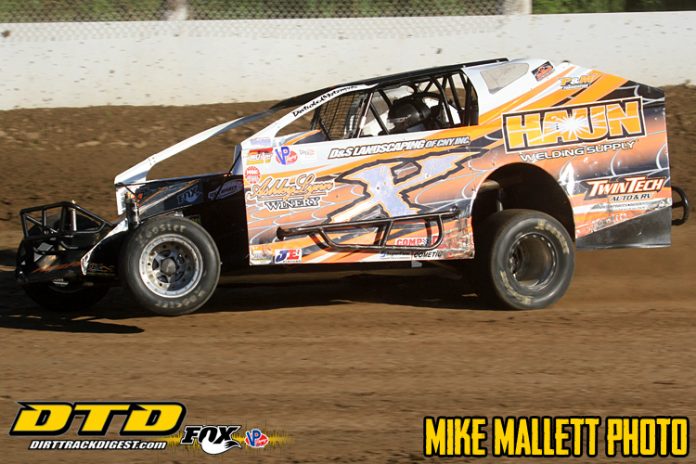 Last Friday was a wild one from the time I arrived at work until I got home from Brewerton Speedway 18 1/2 hours later. The railroad can be intense, and it was all day Friday. Eight hours without a break and no reprieve from several sources of communication is exhausting. A short visit with some friends that I bumped into when I stopped to eat on my way to the track relieved the stresses of work and prepared me for a wild night of racing at the Demon.

The bumping on the track was a little more than I’ve seen all year. It looks like that part of the race season that drivers are hungry, aggressive, and sometimes appear to have tunnel vision to get to the front. That being said, as intense as some of the racing was, it was a great show that ended early when a soaking rain halted the second Sportsman feature before it took the green, and washed away the Mod Lite’s hopes of finishing the night.

Chad Phelps was the big winner in the Modifieds, but not before chasing Jim Witko Jr. for more than half of the feature. A caution with four laps to go slowed the pace. When Witko led the field into turn three for the restart he rolled the teackup a half car width wider than he had been starting which opened the door for the “X man”. When Witko stepped on the loud pedal he slid up, Phelps pounced, drove under him, and took the lead that led to his win.

Dale Caswell returned to victory lane at his old stomping grounds in the RUSH Late Model feature. A gutsy three wide pass for the lead through the middle exiting turn two earned Caswell the lead and eventually win. Ray Bechler drove his Dodge Neon to victory lane to earn another win on the 2018 season.

Nick Krause earned another win in the first Sportsman division feature by being in the right place at the right time. Corey Barker had control of the race with heavy pressure from Stephen Denton. On one restart after a caution Denton fired from seeing place and got huge amount of bite while Barker’s car didn’t seen to launch like it had before. Strong contact with Barker’s rear bumper caused Barker to spin in front of the entire field. Both went to the rear for bringing out the caution, and Krause inherited a lead he wouldn’t relinquish.

As the second Sportsman feature rolled onto the track I felt the rain begin. Several parade laps with a full feature line up couldn’t keep the steady soaking rain from ending the night. On my way home I was amazed, amused, and annoyed by someone in a Prius that wouldn’t let traffic merge into their lane without drag racing them, tailgating me and other drivers, and crossing over lanes of traffic to merge themselves into our lane. There must have been something in the air Friday. My final thought on that, “Dude, you’re driving a Prius. It’s electric, boogie oogie oogie…”

Saturday I was up at 5:30 AM on four hours sleep to co-host a Christian Men’s Breakfast. With Fulton off for the night I took my family to a party to celebrate a family member’s graduation. After the party wound down my son and I caught a movie and some time together over some wings afterward. Sunday I preached in the morning, then replaced some plumbing after I found out Utica-Rome had to postpone their event due to more rains.

Rain has been a plague this time of year at Utica-Rome for several seasons over the last five year’s. They have a great facility, they have a great staff, but they cannot catch a break on Sundays in May or June. Let’s agree in prayer for some fairer weather to come their way so we can enjoy the racing and family friendly atmosphere they work so hard to create.

Joining our faith together, and agreeing in prayer are two of the most powerful principles that Jesus Christ taught. Both are captured in these three verses recorded by Matthew.

“Assuredly, I say to you, whatever you bind on earth will be bound in heaven, and whatever you loose on earth will be loosed in heaven. “Again I say to you that if two of you agree on earth concerning anything that they ask, it will be done for them by My Father in heaven. For where two or three are gathered together in My name, I am there in the midst of them.”
Matthew 18:18‭-‬20 NKJV”

The key to these principles is the abiding presence of Jesus Christ within us and among us through the gift of the Holy Spirit. Holy Spirit, the third Person of the Godhead, is the expressed image of God that resides in believers, and resides upon the earth receiving and enacting the Word of God he hears directly from His throne. As Father and Jesus speak to and through Holy Spirit to accomplish their will upon the earth, Holy Spirit also confirms and performs the scriptures spoken by believers to the glory of God.

“Most assuredly, I say to you, he who believes in Me, the works that I do he will do also; and greater works than these he will do, because I go to My Father. And whatever you ask in My name, that I will do, that the Father may be glorified in the Son. If you ask anything in My name, I will do it. And I will pray the Father, and He will give you another Helper, that He may abide with you forever— the Spirit of truth, whom the world cannot receive, because it neither sees Him nor knows Him; but you know Him, for He dwells with you and will be in you.
John 14:12‭-‬14‭, ‬16‭-‬17 NKJV”

The objective of our assignment to prayer is power through circumstances and obstacles until we see victory thwt ultimately glorifies the Father. Praying through in the authority of the name of Jesus Christ with the power od Holy Spirit is the only way to do that. It’s the power of the Holy Spirit working within us to teach us and remind us of scriptural truths that inspires us to pray as Jesus did, and to see the results He promised.

As we pray in agreement with God’s Word the power of the Holy Spirit intensifies as we each add our supply of the Spirit to one another’s requests. That’s why Jesus said we could do greater things than He did when He went to the Father and sent the Holy Spirit to us. We are greater in numbers, so the magnitude of our potential is multiplied when we seek to glorify God by allowing ourselves to be used by Holy Spirit.

Let’s also offer up our deepest condolences and most compassionate prayers for the families of Bobby “Smitty” Smith, and Jason Johnson. “Smitty” crewed for Joe Goske at Oswego Speedway, and had a few stints in a supermodified over the years himself. Jason, “the Ragin’ Cajun” was a World of Outlaws Sprint Car series racer and a Knoxville Nationals Champion. Their families, teams, fellow competitors, friends and fans, as well as the racing community as a whole feel the loss of these two lovable men. The Finish Line Chaplain Ministry extends our deepest gratitude for the time they each spent with us allowing us into their families and racing worlds.

We’re here to be a blessing in any way we may, so don’t hesitate to drop us a line if you need anything. We can be reached on Facebook at Finish Line Chaplain, Kevin Westcott Ministries, or by email at flchaplain@windstream.net. Everyone have a blessed week and look for ways to be a blessing to someone else.