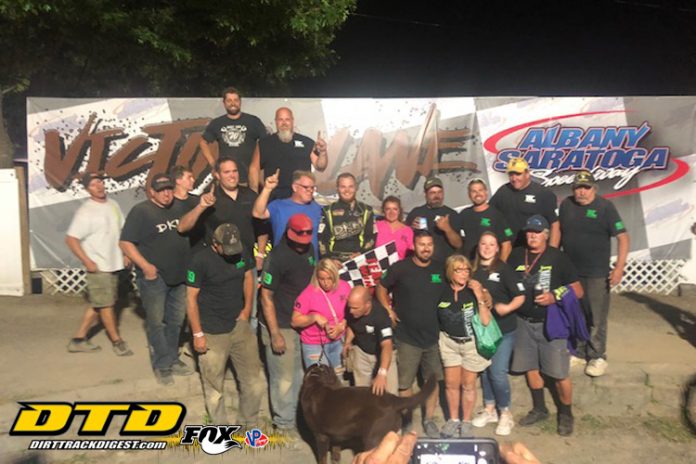 On the card Friday night at Albany-Saratoga was the ever popular “Kiddie Rides” which is always the young fans’ favorite. And one of the favorite Pro Stock drivers at the track, Kenny Martin was one of those coming to the front stretch to thrill the youngsters with a ride in his No. 93. We still have fans tell us today, that they remember riding with a driver on Kiddie Ride night at local tracks when they were younger. It’s something they never forget.

We stopped in the pit area of Emily Quinn, driver of the No. 7 Limited Sportsman and it appeared that she had her own fan club in her trailer. Cody Bleau and Jason Herrington were there to lend a hand and offer advice on race car improvements. As we watched, Emily absorbed all the ideas and finally said, she really appreciated all the ideas but that she wanted to make sure she understood them all before trying any of them. Emily looks to be a driver that has a great future in our sport. She appears to have the respect of many of her fellow racers. It’s great to see and happens more often than not in the pit area of local tracks, something fans don’t get to see.

Victory lane for the Modifieds was one major celebration for young Jessey Mueller who won his first ever Modified race on dirt. Mueller has 12 wins on asphalt at Airborne Park in Plattsburgh and seven wins at Devil’s Bowl in Vermont. On Friday Jessey wheeled his DKM chassis No. 19 to a popular victory at Malta. The victory was long overdue, Jessey has led the feature many times this season only to have that black cloud take away the win. Victory lane was full of family, crew, and fans to help Jessey with the celebration. Maybe now that he has that monkey off his back he will pick up more wins on dirt.

At Albany Saratoga on Friday we spoke with Jason Herrington about a small block race at Lebanon Valley last week, June 16th. Jason explained that early in the evening during a fheat race he thought he lost the transmission in his No. 1 small block Modified. When he got back to the pits it was found that it was the rear end and not the transmission.  Although they did have a spare rear end with them they found it didn’t fit. After some discussion it was decided that they would go home and put the spare car they had in the shop together and possibly make it back for the feature that was the final event on the card. Thus a group of crew members grabbed the spare rear end, crossed the track and made the trip home. Once at home they put everything together and hustled back to the Valley with the spare car and made it in time for the feature. When asked why he would do that, he said “I’m a farmer and we are not quitters.” Jason makes his living and the ability for him to race by farming and we all know if you’re a farmer you are one, 24/7. He finished the feature in 11th. Rain, rain everywhere on Sunday for anyone planning to race. For us we had plans to attend the Celebration of Life for Bernie Herald at Albany-Saratoga. Lucky for those in attendance there was a large tent for the service to be held in. It was an afternoon of family, friends and fans to say good-bye and honor this very special man. It began with the Malta Ridge Fire Department raising a huge American flag atop their ladder truck. Pastor Tim Whitcomb of New Life Ministries did the beginning prayer and Dan Martin introduced many of Bernie’s friends and family that wanted to remember him beginning with Promoter, Lyle DeVore, who emotionally gave Bernie praise for always being one he could rely on and credit for giving him his first job as an official at the track. The remembrances included drivers, fans and media and was completed with a thank you from Bernie’s family. At Albany-Saratoga the term family means just that and Lyle and Marcy opened the gates to the Malta speed plant for all of us to have a great afternoon of remembrance.

We will be in Alaska this weekend visiting our great-granddaughter and her parents David and Aubrie and doing some tourist things.