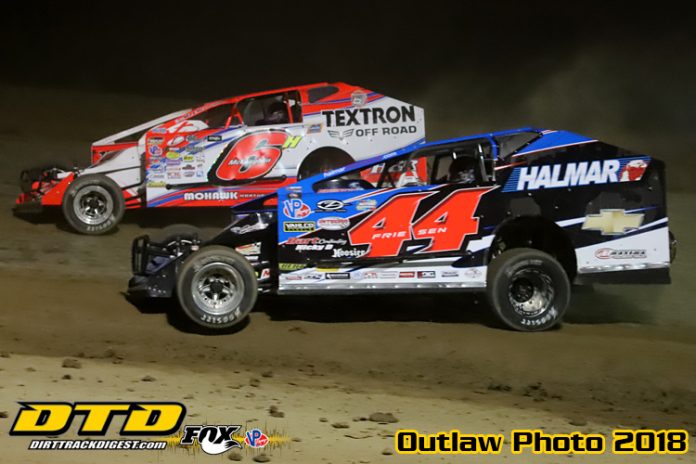 Stewart Friesen took every shot he could at Matt Sheppard throughout the 100-lap Super DIRTcar Series Big Show 10 on Tuesday night at the Albany-Saratoga Speedway. It wasn’t enough. He could hang with Sheppard for a few laps before eventually losing ground to the defending champion. At one point he trailed by over seven seconds.

Friesen’s luck changed on lap 96 for the good, not so much for Sheppard. Sheppard tangled with Willy Decker causing him to spin in the second corner. More on that elsewhere on Dirt Track Digest. At this point Friesen inherited the lead. He held strong on the next two restarts to earn his 13th career win at the Great Race Place.

“To come out and win one of these big ones is awesome,” commented Friesen. “Brett (Hearn) does a great job with this show. I appreciate all the fan support behind it and all the extracurricular stuff that goes along with it. That is cool to see.”

Although he won, Friesen was blunt afterwards accessing where his team stands. He knows they still have work to do to get better. They had plenty of help on Tuesday.  The team needs a bit more speed if they hope to pocket more wins later on in the season.

“We are getting closer, but obviously that was a bit of a gift there,” mentioned Friesen. “We could kind of pace with the 9s (Sheppard) and we haven’t been able to do that in a couple years on the stop and go slick stuff. The Halmar Team has worked hard, DKM has worked hard, and Billy the Kid has worked hard. We still have a little bit of work to do. Hopefully we can find that extra tenth or tenth and a half before we get to Oswego. We’ll keep working on it. I don’t think we are where we need to be, but we are good.”

Friesen had his only real shot at passing Sheppard during a 10 lap battle right after the caution on lap 79. Friesen ran the cushion while Sheppard slowed it down on the bottom. Sheppard drove away and Friesen believed that was the end of it.

“I found a little bit of a lane there after the tires cooled off under the yellow,” stated Freisen. “We hung with him until the tires got hot. Then he started to inch away on the bottom. I was hoping that maybe he’d get to lapped traffic and they would jam up the bottom a little bit and we’d be able to do something. He hadn’t been on the top and he typically doesn’t run the top. I didn’t expect the lap traffic to do that.”

After taking over the race lead, Friesen threw a curve ball at the field. With two laps remaining, Bobby Varin hopped the cushion in the first corner causing him to spin. It’s well documented by this point that Friesen was fast on the top, but on the restart Friesen elected to dive to the bottom going into the first turn. That threw Max McLaughlin and Jimmy Phelps off as they expected him to go to the high lane.

“The last restart I went to the bottom and the last two laps on the bottom it was the best it had been all night,” mentioned Friesen. “I tried to change it up. We got to second but I didn’t know if we were good enough to stay there. Obviously Max and Jimmy are working hard on their program and they are close too. I just tried to change it up and play a little defense the last couple of laps. I didn’t want to screw it up.”

Friesen definitely didn’t screw up as he drove away to pick up another win in 2018.