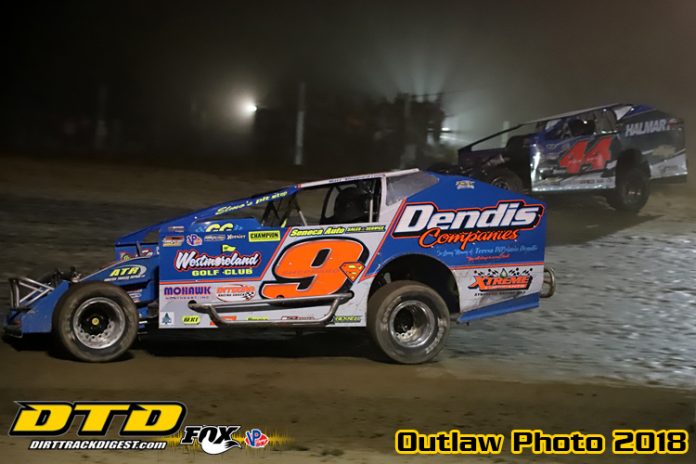 MALTA, NY- Matt Sheppard had a young person draw the pole for him to start the feature. This is not a good omen for the rest of the field. In the last Series race, Sheppard drew the pole and lead wire to wire. This is why we run the race, nothing is ever guaranteed, and nothing is as it ever seems to be until the very end.

From the drop of the green, Sheppard was the man to beat. Though he didn’t lead wire to wire. With just four laps into the 100-lap affair, Sheppard was having his hands full with Cropseyville, N.Y., driver Matt DeLorenzo who is fresh off a victory at Albany Saratoga just two weeks ago.

Delorenzo was reeling in Sheppard for the lead but the caution flag fell on lap seven for Kenny Tremont, killing his early race momentum. With cautions counting until lap 75, the lap counter clicked off several laps and the field went back to work on lap 12.

DeLorenzo picked right up where he left off and pressured Sheppard for the lead and eventually took the lead just one lap later on lap 13. DeLorenzo’s time on the lead was short lived, just 5-laps until Sheppard retook the lead.

Sheppard was on cruise control from this point on. He was able to open up considerable distance over the second place and rest of the field with ease. The race for the lead wasn’t even a consideration until nearly the very end.

With 38-laps into the feature, Stewart Friesen was making his presence known by taking over second place as he exited turn four. Heavy lap traffic, and considerable dust and a track the was starting to slick up, Friesen would have his hands full with Tim Fuller on lap 60.

Fuller, who set fast time on the night, was in a side-by-side battle with Friesen for second. Friesen finally disposed of Fuller for second on lap 65 and once again set sail for the lead that Sheppard was enjoying.

The caution flag fell again for just the second time on lap 79. This time it was for Danny Varin aboard the Magsarus entry. He would rejoin the back of the field just a short time later. Sheppard and the rest of the field had gone 72 consecutive laps under green before this caution came out.

Then at lap 95, catastrophe struck for the leader Sheppard. As he encountered the lap car of Willy Decker, the two got together just outside the exit of turn one. Sheppard would spin out and loose the lead for good. Since the last Super DIRTcar Series race, Sheppard had lead an close to 190 of 200 laps.

With just five laps to go, Friesen would inherit the lead and had a brief amount of pressure from Series phenom Max McLaughlin for the lead but in the end Friesen cruised home to the huge $10,000 payday. By winning the 1st Series race of the year, Friesen had already locked up the guaranteed spot for Oswego. The spot went to McLaughlin.

“Ill take them anyway I can get them. It was real tough. The track just got super slick,“ said Friesen in victory lane. Friesen didn’t believe he had a shot at Sheppard. “I hung with him on the top for a few laps, but he eventually inched away. I just couldn’t turn on the bottom like he can. We wished to pass Matt under open track conditions, but we’ll take it.”

Max McLaughlin came up short again to Friesen. “Third series race of the year and my second, second place finish to Stewart Friesen. I gotta keep running all the races. The more you run the better you get. Our cars are really close right now. My teammate Jimmy Phelps is really fast. Its tough to be Sheppard and Friesen anytime. Those two are at the top of there game. A second to him is almost like a win.”

Third place finisher Jimmy Phelps echoed his teammates sentiments. “We’re fortunate to have really good cars. I got to thank Alan and Judy and everyone at Mohawk Northeast and HBR. I’ve got a great teammate and the cars are running well. We got some track position late, but Max just shook me on the restart. Great job for HBR tonight, I’m happy for everybody.”

Former NASCAR driver and current NASCAR on Fox host Kenny Wallace was the special guest for the night. Wallace did a meet and greet with the fans in the midway and took time in the pits to pose for photos and sign autographs…

Former longtime Schenectady Gazette 4th Turn columnist Tom Bogie was on hand. He recently retired after 30 plus years at the Daily Gazette (formerly known as the Schenectady Gazette). “I sold my column to Lyle (Devore) and now its published weekly on the track website. I still work part time two days a week at the Gazette. I don’t play golf but I am able to do things now that I am retired.”…

Looking thin- Mike Romano has lost over 115lbs. “I should have done this years ago” said Romano.

Mikes dad Andy was fielding a car that is normally driven by defending track champion Peter Britten. On this night the “Ringoes Rocket” Ryan Godown was the hired gun for the night. During his heat race, Godwon hit the cushion in turn three and took a spectacular flight and a series of flips. Godown was unhurt but the car was heavily damaged.

Speaking of Godown, he has picked up a new moniker. “Modown.”  When asked about what he thought of the nickname Godown he said, “I’m going to get new t-shirts made with a lawnmower cutting grass on the back of the shirt. Mow-Down.”…

Elmo Reckner, the Ballston Lake, N.Y., driver, retired from his auto body business earlier this year when a competitor bought him out.

“It was totally unexpected. We have a few little things to finish up with the sale but for the most part everything is done.”

While not disclosing the sum that was paid, Reckner said, “It was enough to keep me comfortable.”…

Noted motorsports journalist Rod Hedger is recovering from a near fatal infection in his arm. Just a few days ago he cut his arm on a branch at home.

“I have a poor immune system due to the arthritis medicine I take. It swelled up again yesterday, so they dug it out and now I have this patch over it. They were talking about last rites when I was in the hospital,” said Hedger. We at Dirttrackdigest.com would like to wish Ron a speedy recovery…

“I had some new shock designs for our in-house brand of shocks. We’ve been waiting since April to get DIRT approval for them, but we had over 200 shocks out to customers for Bridgeport, New Egypt and other places that are not “DIRT” sanctioned. Our consulting service is doing extremely well. I never know where I will be, but business is booming.”…

On July 26th Kenny Tremont will be inducted into the DIRT Motorsports Hall of Fame.

“I talked to Buffy Swanson today. She wanted to get an idea as to how many people were coming.”

When asked what he feels about being enshrined, Tremont replied, “It’s a honor. It’s the top in our sports. Kind of like other hall of fames for stick and ball sports. It just goes to show you that all the decades of working late nights, traveling and all the efforts that have been in were worth it.”