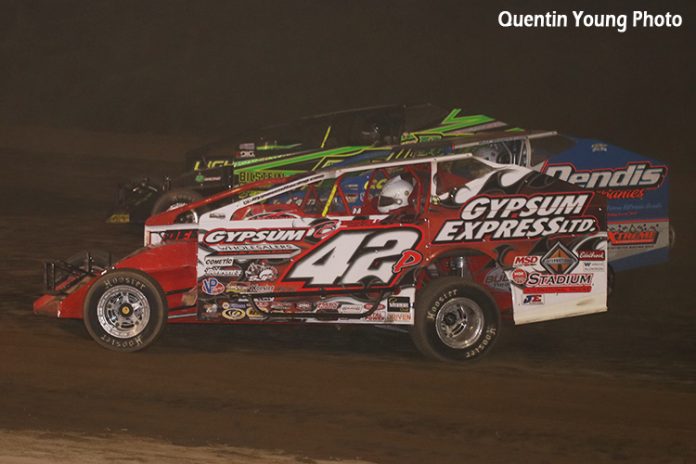 Tuesday night’s Big Show 10 at the Albany-Saratoga Speedway looked like it was going to be a repeat of last Super DIRTcar Series event, the Showdown at Sundown at the Brewerton Speedway. Matt Sheppard redrew the pole position for the start of the race, dominated throughout, only this time the Waterloo, N.Y., driver didn’t end up in victory lane.

Sheppard’s quest for the $10,000 top prize came to a rapid conclusion on lap 96 of the 100-lap affair. Sheppard had just caught the tail of the field after a hard fought 10 lap battle with Stewart Friesen to keep the race lead. Sheppard dove to the inside of turns three and four on the No. 1x of Willy Decker to put him down a lap. From there the pair raced off of turn four with Sheppard getting by Decker.

Decker stayed close to Sheppard.  As they raced into turns one and two when contact was made between the pair. Decker got into the rear bumper of Sheppard. This caused Sheppard to spin and ultimately slide to a stop in the second corner.

Afterwards both drivers expressed frustration with the situation. Sheppard was obviously miffed that the contact cost him a shot at $10,000 and valuable points in the Super DIRTcar Series Standings.

Sheppard felt like Decker should have given him more courtesy considering the point of the race that they were in.

“You are out there two laps down running last when you see the leader underneath you with five to go in a $10,000 to win race, have a little bit of respect,” Sheppard added. “What can you say? It is just unfortunate to have $10,000 taken away from you.”

For his part, Decker wasn’t happy with how he felt Sheppard raced him as he was lapping him during this race and others in the past.

“He (Sheppard) was coming around to lap us and drove over my right front into turn three,” said Decker. “A few laps later he was up the left side of me. I watched him lap other cars and he did the same thing to them. He is plenty fast enough to drive around guys. He doesn’t need to drive like that. There are more guys than just me frustrated with him. He did it to me at Weedsport and he’s done it to me in the past.”

Decker admitted there was contact between the two that eventual sent Sheppard spinning. That was not the intent of the contact as he was just attempting to show his displeasure with Sheppard.

“I rolled in like I was and he was a little slower than I thought he was and I got into him,” cited Decker. “I didn’t mean to get into him that hard, but I got into him. I didn’t really want to spin him, but I wanted him to know that I wasn’t happy.”

Sheppard restarted at the tail of the field and regrouped for a 12th place finish at the checkered flag. Decker was put the rear as a result of the contact but elected to head pit-side before the race resumed. Friesen became the benefactor of the contact as he went on to lead the final handful of laps to capture the $10,000 top prize and his second Super DIRTcar Series win of the season.