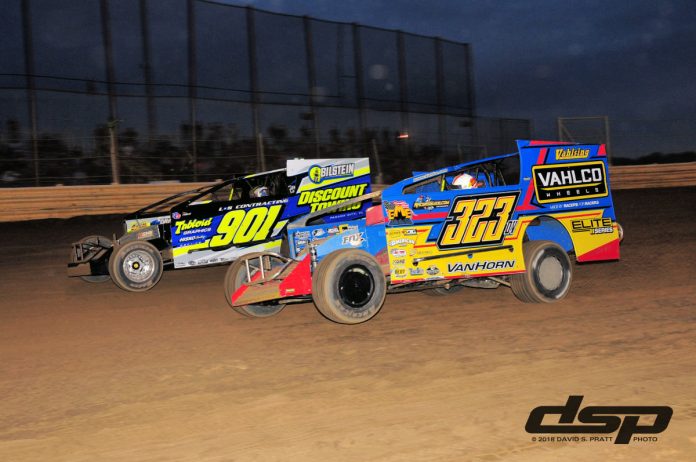 As the green flag waved in the 60-lap Modified feature, Frank Cozze fired to the front of the field with Duane Howard, Matt Stangle, Kevin Vaclavicek and Jim Britt next in line. With four laps completed and after a few cautions, Cozze was still setting the pace with David VanHorn in second, Danny Bouc in third and Howard slipping back to fourth. On the sixth circuit, a multi-car tangle in the fourth turn caused the racing action to stop. On the ensuing restart, VanHorn shot his way past Cozze and into the lead with Bouc, Howard, and seventeenth place starting Ryan Krachun in tow. VanHorn quickly began to speed away from his foes. By the fifteenth circuit, VanHorn had a very comfortable advantage and was approaching the back of the field. Four tours later, VanHorn’s large lead evaporated as John McClelland’s ride slowed on the track and stopped in turn one. When racing resumed, VanHorn repelled Cozze’s attempt to regain the top running spot with Howard zipping by Bouc for third and Ryan Godown passing Krachun for fifth. Once again, VanHorn began to distance himself from the field. When the caution waved for the fuel stop at the halfway point, VanHorn’s edge was a full straightaway over Cozze. As the green flag waved following the mid-race stop for refueling, VanHorn outdueled Cozze to keep his lead with Bouc retaking third place from Howard. With twenty laps left in the feature, VanHorn had built a comfortable advantage over the pack. His lead continued to increase as he was beginning to approach lap traffic in the final ten circuits. On lap fifty-six, fifth place running Ryan Godown slowed down and the yellow lights illuminated for the final time. On the single file restart, VanHorn held off Cozze. Over the final revolutions, VanHorn was not challenged and crossed the finish line to claim his first win of the year and the sixth in his
career at New Egypt Speedway. Cozze’s strong run netted him second place. Bouc finished in third with Howard claiming fourth. Thirteenth place starting Brandon Grosso completed the race in fifth. Mike Mahaney, Matt Stangle and John McClelland were victorious in the Modified heat races. The consolation contest was taken by Brian Papiez.

In the 30-lap Crate Modified vs. Open Sportsman feature, Cale Ross led from start to finish to claim his second career checkered flag. Billy Osmun, who started in seventh, chased Ross throughout the event and finished in second place. Louden Reimert was rewarded with third place following an impressive effort. Fourth went to Joe Toth and Pat Wall came home in fifth. The winners in the qualifying events were Shaun Ratchford, Louden Reimert and Bill Liedtka. Will Dupree won the consolation race.

New Egypt Speedway rolls back into action on Saturday, June 30 with Throwback Night. Adult admission to the grandstand on this special night will only be $10 and hot dogs will only be $1. The racing schedule will see the Modifieds, the 30-lap Mr. Crate Classic for the Crate Modifieds, Larry’s Hot Rods & Harley’s Northeast Wingless Sprint Cars, Street Stocks & 4-Cylinders in competition. On Saturday, June 30, the pit gates unlock at 4:00 p.m. with the grandstand ticket windows opening at 5:00 p.m. Hot laps get underway at 6:00 p.m. and the first race begins at 7:00 p.m. Admission to the grandstand is $10 for adults, $10 for seniors 65 and older, $10 for teens 12-15, $10 for military personal and their spouses with ID, and Kids 11 & under are FREE. Pit admission is $30 with a New Egypt Speedway license and $40 with no license.