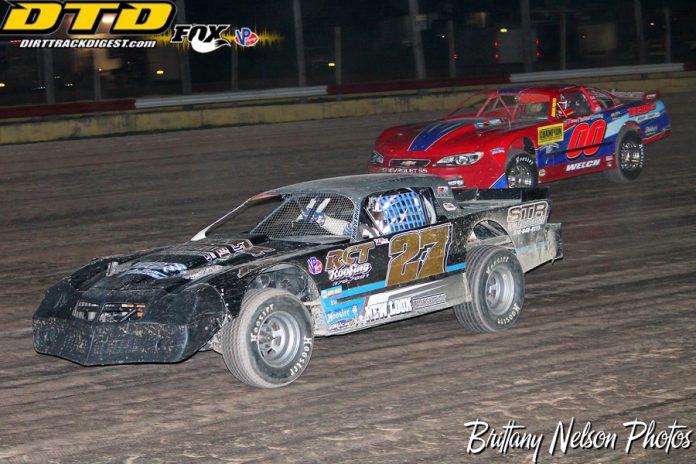 VERNON, NY- After a rough start to the 2018 season at the Utica-Rome Speedway due to weather, track management hopes to get the season rolling starting with at huge show this coming Sunday, July1. Wilber-Duck Chevrolet and the Kotary family will present the 2nd Annual Gene Kotary Memorial for the Ted’s Body Shop Pro Stocks, paying $1,000 to win and $100 start plus contingencies, plus the King of Dirt 358-Modiied Series, King of Dirt Sportsman Series, and the Rookie Sportsman. . In addition to the extra money they added to the Pro Stock purse, the Kotary family is also paying for hot dogs for the first 600 paying guests.

For the second consecutive year, the Kotary family is honoring the memory of Gene Kotary with a huge event for the Ted’s Body Shop Pro Stocks. This year’s edition will pay $1,000 to the winner of the 30-lap main event with each qualified car receiving a minimum of $100 to start. Along with the huge purse that totals over $4,500, there also will be several contingency awards with the list growing daily. Currently, contingency awards include $50 to the leader of the 24th lap from KDK Sports, $100 for the Hard Charger from John’s Auto Restoration, an additional $100 to first place from Bravo’s Machine, $100 to the fourth place and the 21st place car on the 21st lap courtesy of B-N-P Machine Shop, and a free case of oil and an oil filter from Parts Plus. Anyone that wants to add to this big event can call Kim Shea at (315) 794-7805. This will be a heat draw and feature redraw format with show up points only given to all who attempt to qualify and run under the King of Dirt rule structure. Currently, Mike Welch leads the most recent winner, Travis Welch (no relation), Shane Henderson, Bill Knapp, Mike Kazlauskas, and Ernie Staelens in the standings. Henderson is the defending winner of this event.

Gene Kotary was a competitor near the end of the asphalt era at Utica-Rome Speedway, collecting 10 wins between 1975 and 1978 while also grabbing the 1978 track title in the Asphalt Charger/Street Stock division. Kotary also competed with success at the Fulton Speedway as well. He passed away on October 23, 2016.

In the two 358-Modified events completed so far this season, the winner was in doubt in both right up until the checkered flag flew with Matt Sheppard fending off Jeremy Wilder for the opening night win, while Pat Ward narrowly beat a hard charging Billy Dunn to the stripe back on June 17. With the extra money on the line ($2,000 to the winner of the 40-lap feature) and a large field of competitors expected for this Sunday’s King of Dirt Series 358-Modified Series show, more of the same exciting racing is expected. The King of Dirt 358-Modified Series standings show Bobby Varin atop the standings over Jeremy Wilder, Matt DeLorenzo, Marc Johnson, and Kenny Tremont. Billy Dunn leads the Utica-Rome Speedway contingent over Wilder, Erick Rudolph, Johnson, and Pat Ward. Sheppard and Rudolph split the pair of the King of Dirt Series races last season at the Vernon oval.

Sportsman ace Dave Marcuccilli leads multi-time and defending track champion Matt Janczuk, Alan Fink, Kyle Kiehn, and AJ Digsby into this Sunday’s King of Dirt Sportsman Series event. Another large field of drivers is expected as they compete for the $1,000 to win payday that will come at the conclusion of the 30-lap affair. Josh Sunn is the current KoD Series point leader over Adam Pierson, Connor Cleveland, Chad Edwards, and Tim Laduc. Rocky Warner took both King of Dirt Series wins last season, and with Warner into the Modified ranks, a new winner will be crowned king this Sunday.

Like the Ted’s Body Shop Pro Stocks, the Broedel Energy Sportsman and DirtTrackDigest.com 358-Modifieds will be awarded show up points in their respective divisions.

Also in competition will be the Rookie Sportsman. Addison Bowman and Ted Starr have each one event each in the division to give drivers some much needed seat time.

Drivers, crews, and fans are reminded that this Sunday starts the summer starting times that will be in effect the remainder of the season. Gates will open at 4 p.m. with racing starting at 7 p.m. Adult admission will be just $15 for this weekend’s huge event with Students, Seniors, and Military admitted for $12. Children 16 and under are free. Pit admission is $27 for members and $30 for non-members.