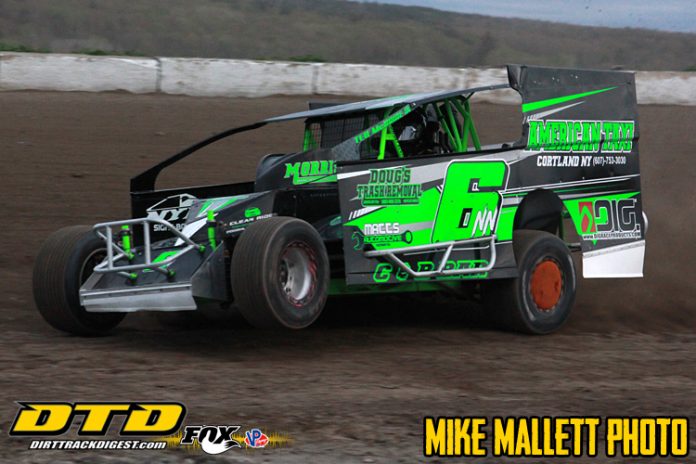 AFTON, NY – Rinker Insurance Agency sponsored the racing program at the Afton Motorsports Park on Friday night with a special visit by the CRSA Sprints, their race story can found on the CRSA website and in their own press release. The racing action in the other five divisions was good with a good sign seeing the racing surface getting wider and not many cars going off on the business end of a tow truck.

The ZMK Construction Modifieds saw their first repeat winner of the year as Nick Nye was able to outgun leader Kenny Titus on a lap nine restart and go on to the feature win over Titus, JR Hurlburt, Mitch Gibbs, and Rusty Smith.

A new face found themselves in victory lane for the Butler Auto Sales Crate Sportsman, but it wasn’t who everyone thought it was going to be. It appeared that 14 year old Ryan Macartney wired the field for a very impressive first career feature win. However in post race tech inspection the car was found to be using a chip that was above the maximum limit allowed by rules and was disqualified.

Fred Christ, who ended up second was awarded the feature win, his first ever feature win after 22 years of racing. Gary Smith, Bobby Flood, Aaron Shelton, and Rob Loucks completed the top five.

For the seventh consecutive week the IMCA Modified feature was captured by James Cornell. Beau Ballard, Tyler Stoddard, Bill Nichols, and Jake Maynard completed the top five. Maynard was dropped to last due to a post race incident on the way to the scales and this moved Eric Stumpf into fifth.

The Four Cylinder Truck division saw Ralph Cuozzo win for the sixth time this year, his fourth in a row. Bob Crandall, Brandon Loucks, Dustin Wilbur and Stephen Candiloro round out the top five.

Rough luck of late continued to hamper the racing efforts of Greene as just after completing lap eight. He pulled to the high side of turns one and two with a fuel pickup problem to bring out the yellow, pitted and called it a night.

On the double file restart Nye was able to get around Titus for the lead by using the ever widening track surface. Titus, Hurlburt, Mitch Gibbs, and Rusty Smith now comprised the top five.

Once in front Nye opened up a big lead within four laps with Titus running the best race of the year for himself alone in second.

A gaggle of cars were left to do battle for positions three through seventh with Hurlburt, Gibbs, Rusty Smith, Brett Tonkin, and Jeremy Smith all racing very hard, but without contact for these positions.

At the checkers Nye in for a dominate win over Titus, Hurlburt, Gibbs, and Rusty Smith.
Titus and Greene won the qualifying races earlier in the racing program.

Pope moved out to a seven car length lead by the time the race reached the halfway point. Clapperton had his hands full with Rosa for second with Hart breathing down the neck of Rosa for third.

With five laps to go the once big lead of Pope was down to less than two car lengths as it appeared that the Pope car was losing grip. Clapperton, looking for his first win of the year closed right in on Pope for the lead.

Behind the top two a blanket could have been thrown over positions three, four, and five as Rosa, Hart, and Hutchings were all racing hard for these positions.

With the white flag waving the lead of Pope was shrinking and Clapperton, the second generation racer was setting up to make a last lap bid for the win.

With the checker flag waving Pope exited turn four on the high side and that was all Clapperton needed as he diamonded the corner off perfectly and got a great run out of the corner to pull underneath Pope.

At the start finish line Pope by a mere ten inches in for win to keep the no repeat feature winner streak going, Clapperton, Rosa, Hart, and Hutchings completed the top five.
Qualifying heat races were won by Don Hart, Jr., who expired his engine on the last lap of this race which ended his night of racing and Pope.

Rob Loucks and Ryan Macartney brought the 20 lap Crate Sportsman feature to green with Macartney getting the lead over Fred Christ, Loucks, Gary Smith, and Blaine Klinger.
Smith who won his first career Crate Sportsman feature last week moved past Loucks for third on lap two. Aaron Shelton raced from sixth to fourth on this lap, Loucks was able to move past Shelton and back into fourth on lap three.

Bobby Flood was now making himself heard as he moved past Loucks for fifth on lap seven. Flood got past Shelton for fourth on lap eight and set sail after Smith for third, which he did on lap 12. Smith had enough of that and got back by Flood one lap later to keep third.

Teenager Macartney looked like a veteran driver as he was slicing through the field with ease and had no trouble at all with lap traffic and built up a half a track lead by lap 16.
Christ meanwhile had his hands full with Smith who was trying every move he knew to get past. But Christ held his line and with Flood all over the back bumper of Smith for third, that kept him busy too.

At the checkers Macartney in for his first career feature win over Christ, Smith, Flood, and Shelton. In post race technical inspection the engine of Macartney was found to be using a chip, which limits how high the rpm’s of the engine can go, was larger than what the rules allow and he was disqualified.

Christ was awarded the win, his first ever career feature win in his 22 year driving career and this moved Loucks to fifth.

Qualifying races earlier in the program were won by Christ and Loucks.

On a lap three double file restart Cornell using a widening outside groove grabbed the lead over Ballard, Nichols, Stoddard and Maynard.

Once in the lead Cornell opened up a comfortable lead with Ballard within striking distance if Cornell made a mistake. Stoddard raced by himself in third with Nichols and Maynard racing hard for fourth.

Cornell in for the win over Ballard, Stoddard, Nichols, and Maynard. On the way to the scales an incident started by Maynard took place and he was placed last in the finish for his actions and this moved Eric Stumpf into fifth.

Lanfair using a different truck this week brought out the yellow on lap three with a fire in the engine department. Quick work by the fire crew and Jerry listening to his one way radio and stopped immediately, limited the damage by the fire.

On the restart Cuozzo out dragged his teammate Crandall to keep the lead over Loucks, Wilbur and Stephen Candiloro.

The remainder of the race was all Cuozzo even with some tinkering on his setup, which slowed his pace. Cuozzo in for his sixth win of the year, fourth in a row over Crandall, Loucks, Wilbur, and Candiloro.

NOTES; Rinker Insurance Agency sponsored the evening of racing. As this was the first day of Vintage Palooza Weekend several of the race cars from yesteryear were on display in the midway area during the racing program and they saw on track time Saturday morning. Don Hart, Jr. and Dan Burman expired their engines during their respective qualifying heat race and were done for the evening. Before the races started a moment of silence was held for area racing fan Buck Briggs and long time Stoddard Motorsports supporter Bill Fenton. A quickly paced racing program saw the final checker drop at a very fan friendly 9:58 pm Friday night.

Next Friday night the first day of the 129th Afton Fair will be seeing Afton Motorsports Park in action. The ZMK Construction Modifieds, Chambers & O’Hara Open Sportsman, Butler Auto Sales Crate Sportsman, Rinker Insurance Agency Street Stocks, and Four Cylinder Trucks will be in action, The Trophy Guy IMCA Modifieds will have the evening off. The evening will be topped off by a huge fireworks show courtesy of NBT Bank.

For next Friday only all race cars will enter the speedway grounds using the turn one gate by the horse barns and enter the pit area using the road behind turns one and two. Any pit personnel who wish just to enter the pit area and stay in the pit area the entire evening will also be allowed through this gate. They will pay the pit entry fee of $30 and drive their personal vehicle to a special parking area behind the covered grandstands in the turn one area. Spectators who will be seated in the grandstand area will enter the grounds through the turn four gates.

Afton Motorsports Park is fast, fun, and furious…come check us out!