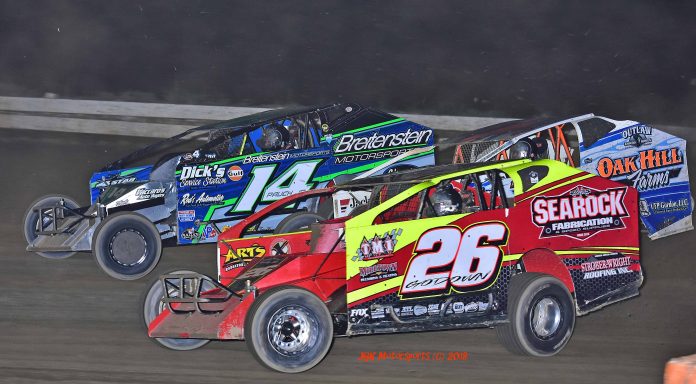 POTTSVILLE, PA – Ringoes, NJ driver Ryan Godown made a statement on Friday night that he is the too beat for the 2018 track title by winning the 25-lap Mattera’s General and Electrical Contracting Modified main event in honor of Dave Kamp. It was Godown’s second win in the last three weeks at the speedway. The win helped Godown extend his point lead and earned a nice $4000 payday.

The winner of Cash Dash Scott Albert took the lead at the onset from his front row starting spot. Albert who must be the hard luck driver of the year so far at Big Diamond continued his bad luck by breaking on lap two while leading bringing out the yellow and handing the lead to Andy Burkhardt.

Burkhardt led on the restart with Billy Pauch Jr driving the Breitenstein Motorsport #14 on this night right on his heels. A hard charging Ryan Krachun was now up to third with the all the foursome of Craig Von Dohren, Ryan Godown, Jeff Strunk and Duane Howard now also getting up into the mix. The racing was getting intense as the caution came back out on lap 11 giving everyone a chance to settle back down and tighten their belts.

Burkhardt was still in the lead, but he had a hungry pack of drivers behind that were all looking to get to the top spot first as they came to the restart. When the green flag came back out the battle was on with Godown and Von Dohren making it four wide going into turn one from the second row. The foursome raced through the turns without any contact. Godown took his Searock Fabrications #26 down as low as he could get it in turn two and as the field exited the corner it was Godown getting a tremendous launch out of the turn to surge into the lead.

“Restarts are always the key here” said an exuberant Godown. “The problem is when your starting on the bottom and I think we were starting third there you just follow the guy in front of you. I think little Billy (Pauch Jr) was on the bottom and (Andy) Burkhardt picked the top to restart the race and I was able to go underneath in turn two down by the yuke tires and got a good drive off the corner to get out front. I don’t know if those guys slid up the turn a little or not but all I know is when I came out of (turn) two there was nobody next to me. The car was fast the whole feature, we tried a couple of different things last week and it didn’t work out too well, so we went back to basics this week and it worked out.”

The final caution of the race would come out on lap 15 with early leader Andy Burkhardt coming to stop ending his good run. On the restart Godown would set sail and stretch out his lead with Von Dohren now in second. Behind the two front runners a fierce battle was being waged for third between Pauch Jr, Strunk and a surging Howard.

Godown kept it in front to take the big win with Von Dohren, Pauch Jr, Strunk and Howard the top five. Ryan Krachun who was super-fast early the in the race faded late and finished sixth. Kevin Beach Jr, Briggs Danner, Frank Yankowski and Frank Porreca finished out the top ten.

“Jake (Smulley) did a heckuva job tonight with the track considering all the rain they had the other night” mentioned Godown. “The track was really smooth tonight, everybody can say what they want, and I don’t get it, but Jake’s probably got the most consistent track out there. I thanked Jake afterwards for doing these shows and you would think that paying $4000 for a 25-lap feature you would get some more cars.”

In the 20-lap USS Achey Sportsman main event it was Craig Whitmoyer back on top to take the win. It was Whitmoyer’s second win of the season as he looks to get back to the top of the title chase. Unfortunately for Whitmoyer the driver leading the points Alex Yankowski finished right behind him in second. Nate Klinger took the early lead with from his outside pole starting spot. Cautions were the story of feature early on forcing starter Jeff Merkel to make the decision to start the race single file. Once the racing got going Klinger was still in the lead, but the heavy hitters were starting to make their presence known as they were working their way towards the front. Drivers Whitmoyer, Dave Dissinger, Shawn Light, invader Brad Brightbill along with points leader Alex Yankowski were all starting to turn up the pressure as they made their way to the front.

Whitmoyer pulled up alongside the leader Klinger on lap 15 looking for the lead. The pair raced side by side until a lap 17 miscue by Klinger which found him pushing up track was the break Whitmoyer was waiting for as he grabbed the lead. Whitmoyer had one more challenge ahead of him as the yellow flag was back out on lap 18 making it a two-lap shootout to the end.

Whitmoyer was up to the challenge and went on to take the win over Alex Yankowski, Brad Brightbill, Doug Hendricks and Dave Dissinger.

In the Savage 61 Road Runner feature, Shon Elk took the early lead and led until lap five when Matt Ney took over the top spot. Ney continued to lead the way until a lap 18 restart when Terry Kramer took over lead. Kramer’s stay at the top lasted only one lap when the caution came out again on lap 19 and Kris Ney took the lead on the ensuing restart. Kris Ney would go on to grab the win with Kramer, Matt Ney, Jim Kost and Mike Reichert your top five.

The No Sweat Service Group Street Stocks feature event was won by Chris Derr who came out of nowhere on a lap 18 restart to rocket by everyone and take the win. Kody Sites who led the majority of the race finished second with Ryan Smith, Bobby Kupp and Kyle Martin the top five.

Don’t forget that next Friday night July 6th is the annual George Stevenson Memorial Race. This year’s format will feature the always popular Twin 20’s for the 358 Modifeds. The Sportsman will race for a top prize of $1000 along with the winner received a guaranteed starting spot in the July 27th Leindecker Racing Engines Sportsman Summer Classic paying a whopping $5000 to the winner.

The modified heats were won by Briggs Danner, Scott Albert and Billy Pauch Jr. The consolation was won by Jimmy Reppert. The Red, White and Blue Auto cash dash was won by Scott Albert.

The sportsman heats were won by Doug Hendricks and Nate Klinger. Leader at halfway in the feature was Nate Klinger. The hard charger went to Brad Brightbill. Laps were led by Nate Klinger 1-16 and Craig Whitmoyer lead the final 4 laps.