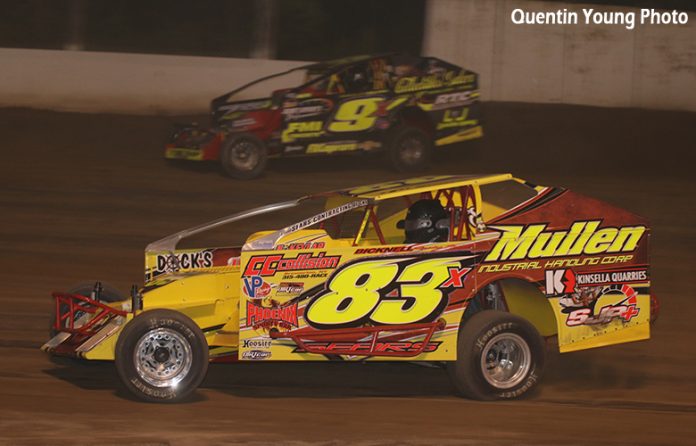 BREWERTON, NY – Tim Sears Jr., has been strong all season long at the Brewerton Speedway but had yet to be able to crack into victory lane.  He remedied that problem on Friday night as scored his first win of they year at the D-Shaped Dirt Demon.

“We’ve been there all year, but just haven’t been able to get all the way there until tonight,” Sears said. “We ran third to Jimmy (Phelps) and Larry (Wight) the first two weeks, then a pair of top fives, now we’re here.”

Tyler Trump didn’t mind having a major horsepower disadvantage to most of the Modified field at the start of the 35-lap feature, taking the lead in the opening circuits with his small block powered Bicknell. Just like last week, Trump opened up a sizable advantage in the early stages while blasting around the top of the track, opening up about half a straightaway on the battle behind him by lap 10.

That battle behind Trump consisted of Ronnie Davis III, Gary Tomkins and Sears. After clawing at the bite on the bottom of the surface, Sears eventually found what he needed and secured second with 12 laps completed. Sears then went chasing after Trump, while Tomkins got the best of Davis for third.

Lap after lap, Sears inched in on Trump. By lap 20, Sears was alongside the teenager, but Trump kept his 358 wound up on the cushion and held on for the moment. However, Modified rookie Trump could only hold on for so long, as Sears got the bite he needed off of the low side of turn four to be scored the leader with 23 laps in.

“Trump was rolling good, he was tough to catch up there,” noted Sears of the battle. “I’d catch him, then he’d pull away for a couple of laps, then I’d catch him again. We kept playing cat and mouse, and when we caught lapped traffic I was able to capitalize on it.”

Trump was able to hang within a couple car lengths of Sears for the next few laps, but Sears slowly pulled away. Behind him, Davis slid around Tomkins to regain third, then closing in on Trump for second.

Davis began pressuring Trump with a couple laps left, making the pass coming to the white flag. This was all a good distance behind the leader, as Sears cruised to his first Brewerton and third overall win of the year.

The duo of small blocks in Davis III and Trump finished second and third, while Tomkins and Max McLaughlin completed the top five.

Last week, the second Sportsman main was rained out, forcing it to be ran at the start of this week’s program. Mark Yorker took the lead from Joe Kline and never looked back, taking his first Brewerton win after years of trying in the 358 division in the late 1990s and early 2000s.

Rich Townsend reached the front of the pack early in the first regularly scheduled Sportsman event and was never challenged the rest of the way, winning by quite a distance over Kevin Root. In the second feature, Chris Mackey found his way to the front quickly as well, but had to hold off a hard charging Will Shields to score the checkered.

Evan Wright got quite the graduation present in the form of his first 4-Cylinder win. Wright darted to the point in the opening circuits and had no competition the remainder of the event.