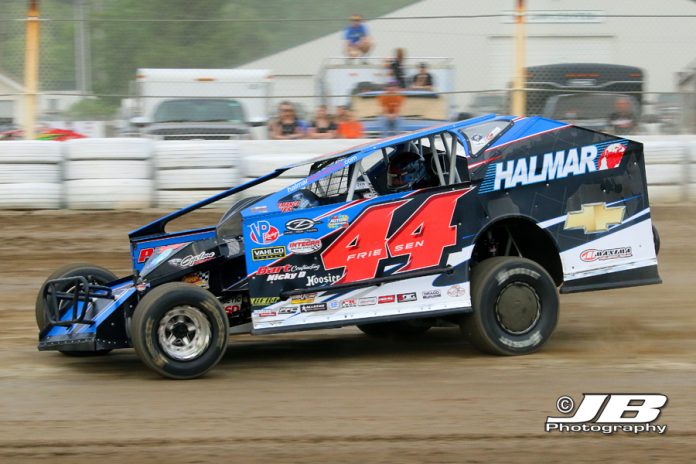 FONDA, NY – Because of his commitments to the NASCAR Camping World Truck Series, Sprakers, NY resident Stewart Friesen has been unable to compete at his home track, the “Track of Champions” Fonda Speedway for the past couple of weeks. Saturday evening he was back home again and brought the Halmar sponsored, DKM Cyclone chassis to victory lane for the third time in 2018.

“It was all hands on deck tonight here at Fonda with all the DKM guys working very hard with some R & D stuff on this car tonight,” Stewart told Dan Haslun in victory lane with Stewart’s son Parker alongside. “It is such a privilege to be here.”

The win for Friesen was the 50th of his career at Fonda tying him with Pete Corey for sixth on the all-time win list. Friesen’s first win at Fonda came back on 7/27/2010 and in a total of only eight seasons racing at the track he has built his total up to 50 in a short period of time.

The 4th Annual Bill Ag Elimination Dash was held in honor of Bill Anagnastopulos of the “Winners Circle” Restaurant just around the corner from the Fonda Speedway. The top five in modified points were eligible including Bobby Varin, Josh Hohenforst, Jeremy Wilder, Rocky Warner, and Tim Fuller with a driver in point’s positions six through 10 being chosen by a blind draw and that driver was Jimmy Davis.


Varin and Fuller were the first two drivers to compete against each other with Fuller taking the victory. One by one after that Fuller disposed of the remaining four other drivers and collected a total of $2424.24 for a total of only 10-laps! Fuller had lane choice for every race except for the last one against Hohenforst but was still able to get out front at the drop of the green flag for the big money event.

Bill Anagnastopulos Jr. presented the winning check to Fuller who had this to say to Mike Mallett in victory lane: “When Josh (Hohenforst) got lane choice for the last race I thought that I was in trouble, I was real concerned because he is fast here at Fonda on a heavy track. This event is a little different, it has a lot of pizzazz, and racing needs more of that.”

The total amount paid out in the event thanks to the above sponsors and donations was $3624.24!

The Fonda Speedway Kid’s Club held a bicycle giveaway with the winners of the bikes including Peytonn Rajkowski, Darrin Rush, Aaryanna Kendle, Henry Olsen, Chloe Haig, Ariel Rugh, Abby Lais, Joshua Funk, Landen Lais, Lauren Kucel, Dylan Chest, Jaz Lynn, and Candace Carpenter. Special thanks to Ashley Abeling for coordinating the event which was a thrill for all the winners.

There was a moment of silence held for “Burger” Don Knapfel before the National Anthem was played after Knapfel’s passing earlier in the week. Knapfel was the owner of the car #44B that Dave Lape piloted to many wins and championships during his racing career.

Prior to the 20-lap CRSA Sprint Car feature a missing man formation was performed by the drivers during the pace laps who left the pole position spot empty in honor of sprint car driver Jason Johnson who recently lost his life in a racing accident.

Pep Corradi led at the drop of the green flag in the modified feature event from his pole position start with Craig Hanson close behind. Going into turn two a multi car pileup ensued when someone got out of shape in the turn and the pack just piled in. Fortunately many of the drivers were able to restart at the rear of the field and continue in the event. One driver that was unable to do that however was point leader Bobby Varin who was done for the evening at that point.

On the original restart, Corradi continued to lead followed by Hanson with a new player in the event quickly coming from his 14th place starting position. That was none other than Stewart Friesen who moved into the third position on lap four after getting around the outside of four cars just after a restart.

Friesen moved past Hanson for the second position on lap six and one lap later he was the new race leader after getting by Corradi on the outside of turn four. The caution came out shortly afterwards and because Friesen didn’t complete a lap after taking the lead the race reverted to the last lap placing Corradi back in position number one.

It took two tries to get the event back underway but once it went green for good Friesen got by Corradi for the lead and ran away and hid from the rest of the field after that. Defending track champion Tim Fuller who had already won a lot of money in the Bill Ag event started the feature in the eighth position and by lap 10 he was the new second place car after getting by Corradi for the position.

Friesen was a straightaway ahead of Fuller at that point with two cars involved in the lap one incident in turn two able to move their way back to the front, those drivers were Danny Varin and Josh Hohenforst. At the halfway point in the event, Friesen was the race leader followed by Fuller, Corradi, Cody Bleau, and Danny Varin.

Danny Varin was the new third place car on lap 18 after getting by both Bleau and Corradi while Friesen was taking no prisoners and went in between the two lap cars of Rocky Warner and Anthony Cardamone in turn two to maintain his big lead over Fuller. That is the way it would finish as Friesen collected his third win of the 2018 season over Fuller, Danny Varin, Hohenforst, and 10th place starter Jeremy Wilder.

“Pete (Fonda Speedway promoter Pete Demitraszek) has this track ironed out,” Friesen said in victory lane. “It is smooth and fast.”

All you had to do to be entertained in the 25-lap sportsman feature was to watch the front two cars as they put on a lead swapping, side by side show for the fans for almost the entire distance. Pole starter Brian Pessolano took the lead at the drop of Joe Kriss’ green flag with point leader Nick Scavia close behind.

Scavia took the lead on lap two as he was running the inside groove while Pessolano was using the outside groove to his liking. These two drivers raced hard and clean all race long, spending most of it side by side with each other. The lead changed six more times before Scavia took over the lead for good with 10 laps to go in the event.

From that point on Scavia pulled away from the rest of the field for his third win of the season in the North Country Electrical LLC #17 Teo Car and the fourth of his career in the division over Tony Farone, Pessolano, Ray Zemken, and Chad Edwards.

“It was a tough beginning to the race,” Scavia said in victory lane. “It seemed like five years had gone by when it was only lap seven and I had my hands full with this fast track. You had to be real patient with lap cars too.”

Just as the sportsman feature was a side by side affair for most of the 25-lap distance, so was the 20-lap pro stock feature with Luke Horning leading at the drop of the green flag. By lap two, eighth place starter Chuck Dumblewski was already up to the third position while defending track champion and seventh place starter Kenny Gates was right behind in fourth.

Dumblewski and Gates both got by Ivan Joslin for the second and third positions with Horning out to a half straightaway advantage. At the halfway point Horning, Dumblewski, Gates, Joslin, and 12th place starter Josh Coonradt ran in the top five positions with the yellow flag out on lap 11. Dumblewski was running the outside of the speedway and took the lead away from Horning on lap 13 coming down the front stretch to complete the lap.

Gates and Coonradt both got by Horning for the second and third positions with five laps to go and once Gates got alongside of Dumblewski for the lead they stayed side by side for the remaining laps in the race. Dumblewski held off all challenges from Gates until the final lap when Gates got by for the lead on the backstretch and went on to win his fourth of the season and the 76th of his career at Fonda over Dumblewski, Coonradt, Horning, and Joslin.

“It is fantastic when you can get to victory lane at Fonda,” Gates said after the win. “I want to thank Chuck (Dumblewski) for racing me clean during the race, we were side by side for any laps and never touched.”

It took two tries to get the CRSA Sprint feature underway but both times Bobby Hackel led from his pole position start. Jeff Trombley started the event in the seventh position but by the time lap one was completed he was already in the fourth spot. Trombley was the new third place car on lap 11 just before the first of two yellow flags flew in the event on lap 13.

Cory Sparks laid a trail of liquid down the front stretch going in to turn one and was done for the evening at that point while running second. Hackel and Trombley pulled away on the restart to make it a two car battle for the lead with Hackel passing under the checkered flag first for the win. He was later disqualified in post-race tech for having illegal valve springs with the win going to Trombley in the Warren Alexson owned #3A. Thomas Radivoy, Sydney Prince, Dustin Purdy, and Gerald Sehn completed the top five in the event.

Cliff Haslun led the first six laps of the street stock feature event until defending track champion Johnny Young got by for the lead on a lap seven restart. Yong went on for his third win of the season and the 11th of his career over Rob VanAernam, Michael Arnold, Mark Dwyer, Haslun, Jason Samrov, Scott Gauthier, Joey Wilson, and Steven Young.

Dylan Eldred led the first 12 laps in the limited sportsman feature until Travis Billington got by him for the lead on the inside of the backstretch. Billington went on to his third win of 2018 over Derrick McGrew Jr., Eldred, defending track champion Cory White, Michael McCallion, Jared LeClair, Steve Wagoner, and Bill Port.

Jay Lais went on the win in the “Classics on Dirt” Vintage car feature event after contact between John Constantino and Doug Mathewson too them both out of the event while they were running for the lead. Lais won for his first time ever at Fonda and brought his father Tom to victory lane for the celebration. Mike Gray, Rob Casti, Constantino, Mathewson, and Frank Blanchard completed the finishing order in the event.

Next Saturday, July 7 will be Andy’s Speed Shop Night with a 50-lap modified feature highlighting the racing program along with a spectacular Fireworks display and Banner Night. Racing will begin at 7:00 p.m.

Please be sure to visit the Fonda Speedway Museum to look at displays that feature the history of the “Track of Champions”. The museum is open before the racing program begins every Saturday evening.