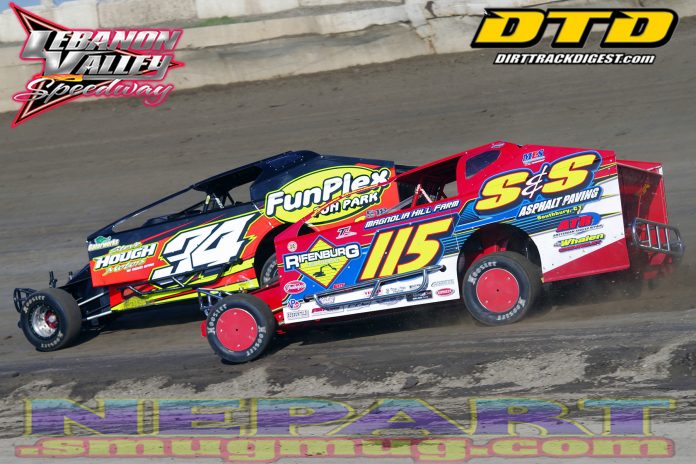 WEST LEBANON, NY – Despite entering Saturday night third in Modified points, Kenny Tremont Jr. and his team felt that they were missing something. For Saturday night, they acquired a new Bicknell chassis as an experiment. So far, so good.

Paul Gilardi started from the pole and led early. Tremont started in the fourth position and wasted no time getting himself to the front. On lap 4, he passed Gilardi to take the lead and immediately began running away.

Further back, Brett Hearn started his charge from the 15th starting spot in a methodical fashion. By lap 11, he was up to seventh. At that point, the yellow flew due to debris from Keith Flach’s car.

Another man on the move was Ronnie Johnson. Starting 12th, Johnson was right in front of Hearn at the first yellow. He then left Hearn behind, taking advantage of a couple of restarts to move up to second on lap 13.

Following a spin on the backstretch for Mike King, the field was set for the run to the finish. Tremont opened up a big gap over the rest of the field and pulled away to take his first win of the year and his 131st Modified win at Lebanon Valley.


“It was very good tonight,” Tremont said afterwards. “We’d just gotten in a bit of a rut. [The crew] got together a couple of weeks ago and said that we needed to try something different. It was all them. They did all the leg work to get the car together and it worked out good.”

In the Small Block Modifieds, Chad Pierce started from the pole and ran hard early on. Behind him, the man that was on the move was Brett Haas. Haas was fastest in warm-ups and knew that he had to go as soon as the green came out.

On the first lap, Haas moved up from his ninth starting spot to fifth. A couple of laps later, he was third. On lap 5, Haas took second away from Olden Dwyer, then immediately ran down Pierce. Two laps later, Haas had the lead and was driving away.

Why did Haas have to get to the front so quick? He had to get away from the cavalry, led by Tremont. Starting 16th, Tremont quickly moved into the top 10, then started picking off drivers one-by-one.

There were no cautions in the feature, but two near misses. On lap 2, Timothy Davis went for a partial spin in turn 2 and got hit by Frank Harper. Later on, Jason Herrington and Olden Dwyer had contact on the frontstretch.

Tremont was able to get past Pierce for second on lap 18, but Haas had already built up the better part of a full straightaway on the field. Haas was able to maintain that gap to take his first win since 2014.

Tremont was second, followed by Pierce. Herrington was fourth, while Dwyer was fifth.

The Pro Stock feature was the complete opposite of the Small Block Modified feature. Don Collins started from the pole and led early, but the man on the move was Rick Duzlak. Duzlak almost immediately shot up from his fifth starting spot to take second in the opening laps.

A multi-car incident in turn 1 involving Steven LaRochelle, Nick Reilly, the returning Chuck Towslee, Dave Stickles and others brought out the first of what turned out to be eight cautions on lap 2.

On the restart, Duzlak was able to make his move for the lead on Collins. Collins couldn’t put up much of a defense to keep Duzlak from the point. The lead was consolidated when Rob Yetman blew his right rear tire on the frontstretch to bring out another yellow. Yetman would continue with a new tire and finish eighth.

The rough and tumble racing continued with contact bringing out more cautions. In Towslee’s case, he had a broken brake pad that wreaked havoc on his evening and caused him to get involved in multiple incidents.

Rich Crane eventually moved up to second and challenged Duzlak for the lead with four laps to go. However, Duzlak was able to hold Crane off and take his second win of the year.

Crane was second, followed by Jon Routhier. Jay Casey was fourth, while Nick Hilt was fifth.

In Pure Stock, Zach Sorrentino and Al Relyea won features. The Meltz Lumber Purestock Race was postponed and will be rescheduled for a later date.

Note: The fourth-place finisher Jay Casey is from Canaan, Conn. while the Jay Casey that finished 24th is from Massachusetts.