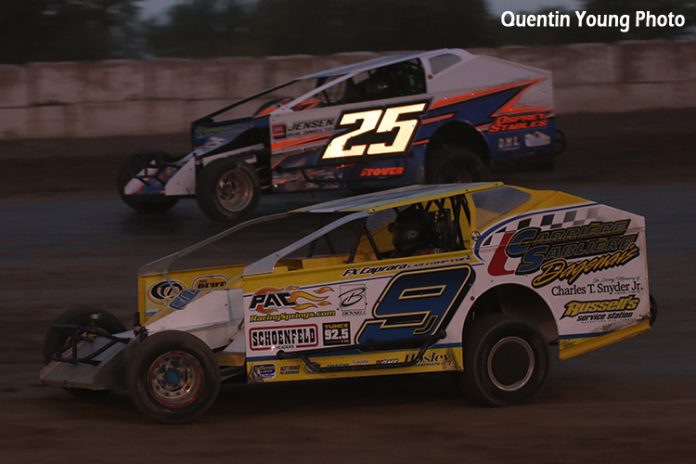 Jordan McCreadie grabbed the win on Friday up at Can-Am and picked up right where he left off on Saturday, taking the lead at the drop of the green for the 50-lap Small Block Modified main. McCreadie dropped his right rear tire on the cushion and set sail, building up an entire straightaway lead over Tom Sears Jr. and Jeff McGinnis by lap 10. At that point, McCreadie’s lead began to stabilize, but lapped traffic loomed large.

McCrwadie sliced through traffic with relative ease, but behind him things were heating up. By halfway, McGinnis had begun pressuring Sears for second, while Larry Wight had charged to fourth from ninth. As the lap counter entered the thirties, second through fourth were under a blanket, with McGinnis, Wight, and Sears racing hard. Wight first went from fourth to second on lap 35, but McGinnis fought back for the time being.

Behind them, Ronnie Davis III and Tim Sears Jr. had entered the fray, both sliding around Tom Sears Jr. for fourth and fifth. Eventually, Wight secured the runner up spot from McGinnis, but this battle allowed McCreadie to extend his advantage to nearly half a lap.


After 50 caution free circuits, it was Jordan McCreadie wiring the field for his first Fulton victory in the Unique E-Cigs 358 Modified Series opener. Chasing in a distant second was Larry Wight, with Jeff McGinnis edging out Ronnie Davis III for third and Tim Sears Jr. chasing closely in fifth.

The win was McCreadie’s third of the year, with the previous two coming at Can-Am.

“That was a tiring race. I don’t know about those guys, but I’m winded,” said McCreadie after climbing out of his hot car to the cooler 90 degree air temperature. “You don’t really know where second is. When you’re in traffic you don’t have much time to look up at the flag. The lapped cars did fine, it wasn’t much trouble, usually when a fast car runs into somebody trying to lap them, it’s the fast car’s fault. I’m sorry I got into that guy, it was probably my fault, but I’m just happy it all stayed together.”

McCreadie has shown consistent speed in his first season at Fulton. However, he didn’t expect it.

“I thought we’ve been pretty good here so far,” McCreadie noted. “In the spring, I thought we were going to come here and really not run good at all. To be able to win here at all is very big to me.”

Bret Belden has many feature win trophies, but all are from the Pro Stock division. After a number of close tries, Belden finally added a Late Model plaque to the wall, leading all 20 laps in the feature and holding off Jason Parkhurst in a two-lap dash to the finish.

Garrett Rushlow looked to be continuing the first time winner at Fulton theme in the first Sportsman main, but Brandon Ford had other ideas. Ford drove around the outside of Rushlow in a third-to-first move with five laps remaining, netting Ford his second checkered of the year.

The second Sportsman feature was a battle between two drivers very familiar with Fulton’s victory lane. At halfway, Alan Fink completed a hard fought pass on Mike Button for the lead and cruised to yet another win at the track.