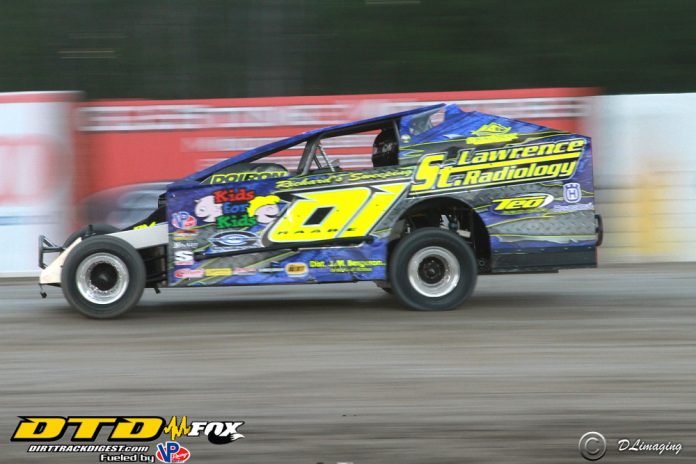 LaFountain had lane choice on a lap-21 restart with Begor alongside. The top was the
preferred groove and LaFountain took his 20x machine to the high side. Begor was on the throttle earlyin the middle of the fourth turn, but LaFountain was too strong in turn one.
“I was pretty tight all night,” LaFountain said. “It was an easy decision to pick the top.”
Begor held on for the runner-up position. Andy Heywood recorded a season best third place
finish with Patrick Picotin and Nick Heywood completing the top five.

Chris Raabe collected his third win of the season in the Egglefield Ford 358-Modified division.

Raabe inherited the lead after Todd Stone slowed in turn two to bring out the caution.
The restart would pin the top two drivers in the division on the front row. Raabe selected theoutside and put Steve Bernier on the bottom. Bernier nailed the restart, but Raabe was strong throughthe first and second turns and pulled away down the back stretch.  Bernier held on for second with Jessey Mueller driving to third. Maxime Plante and Josianne
Plante completed the top five.

The Ernie’s Discount Tools Super Stocks had another exciting finish this weekend, as Jim
McKiernan nosed out Josh Terry at the line in a photo finish.


Terry led the first 13 laps, but a yellow flag slowed the pace. Terry would also select the
outside groove, but this time it didn’t work out. McKiernan was hooked up on the inside and inched his way to victory. The two cars, side by side, never touched in the final two laps. Tylor Terry, Shawn Duquette and Brent Jarvis rounded out the top five.

Cam Gadue made it back to back wins in the Mini-Mod division, with Caleb Tourville breaking into victory lane for the first time in the Strictly Stock division.