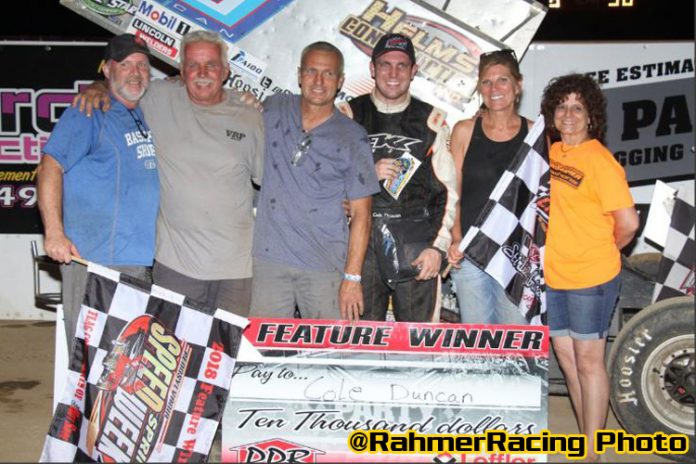 SPRING RUN, PA – Fred Rahmer Promotions, brought to you by Leffler Energy, and Pioneer Pole Buildings put up $10,000 to win the Pennsylvania Sprint Car Speedweek race Sunday night at Path Valley Speedway and if not for Ohio’s Cole Duncan, it would have stayed in the Rahmer family.

But, Duncan went to the outside and used the middle groove, which Freddie Rahmer used to take the lead earlier in the 50-lap event, to drive back by him on a late-race restart.
Duncan, of Lockbourne, Ohio, controlled the final six laps in his Helms Construction 22, scoring his second career Path Valley win by 0.914 seconds over Rahmer. It was Cole’s second $10,000 win in his last three races (Ohio Speedweek finale at Atomic).

“I don’t think I had anything if that last restart doesn’t happen,” Duncan said. “I knew we were running out of time. Everything fell our way late, but early I felt like I couldn’t make the right move in traffic and got shuffled back a little bit. Freddie kind of showed me the way around there. We were all bunched up around the bottom and he got to rolling right through the middle. I was a little surprised on that restart that he ducked back down to the bottom. He gave me a lane there and I made it stick. I had one opportunity. I knew if I showed my nose and didn’t make it stick, he was going to move up and block.”

Rahmer was disappointed, but satisfied, also, that he had a good run. He earned $3,500.


“The lapped car (Montieth’s 21) got me back on the bottom and I figured it was time to get back to the bottom,” Rahmer said. “If I would have run through the center down here, I don’t think he would have got me because once I moved up, I maintained. If I wasn’t going to win, I’m glad Cole did.”

The race was promoted by 13-time Speedweek champion Fred Rahmer, so the money almost stayed in the Rahmer family.

“That’s their deal and they do a great job on that,” said the elder Rahmer. “We got beat by a better car. Freddie did a hell of a job for the amount of experience he has in those situations. I was really happy. He’ll be okay.”

Mike Wagner led the field down to start the 50-lap main event and controlled the opening laps over Tim Shaffer, Cole Duncan, Brock Zearfoss and Gerard McIntyre. A yellow with 6 laps complete, for Jessie Attard, regrouped the field and Parker Price-Miller was able to get by McIntyre for fifth when racing resumed.

Duncan overtook Shaffer for second on lap 11 and was challenging Wagner for the lead by lap 12 as a frontstretch tangle involving Jared Esh, Danny Dietrich and Lucas Wolfe resulted in Dietrich and Wolfe, who were battling for 11th, losing several spots but continuing. But Esh’s 33 eventually came to a stop causing the caution.

The top five now showed Wagner, Duncan, Shaffer, Zearfoss and Price-Miller. And remained unchanged through the next yellow on lap 16 as Dietrich’s 48 exited to the infield.

The 24-car field on the Path Valley quarter mile provided back-and-forth racing action through the field and around the entire track.

Duncan continued to challenge Wagner for the lead, but Brock Zearfoss joined the battle as the leaders encountered the fast but struggling 21 of Brian Montieth at the tail of the field. In the cluster of four cars, Zearfoss moved his 3Z inside Duncan taking second on lap 24 and then immediately charged up beside leader Wagner.

A near dead heat on lap 25 officially showed Zearfoss as the leader. Zearfoss secured the top spot as they raced off turn two, while Duncan took third from Wagner as the caution flew again with 26 laps completed for the disabled Highlands 3 of James McFadden.

Rahmer, meanwhile, had moved by Shaffer into the top four, finding the line just to the outside of most who were dueling on the tight, inside grooves. Following the restart, Rahmer used the middle groove blasting by one car at a time starting with Duncan on lap 28, Wagner on lap 29 and then leader Zearfoss as the completed 30 laps.

They were racing in heavy lapped traffic again with Rahmer pulling away and looking like a winner while Duncan took third from Wagner on lap 32 and second from Zearfoss on lap 41.

The final caution flew with 44 laps complete for the Attard 53, setting up the showdown. On the restart Duncan made his move on the restart to the higher line and was able to stay even with Rahmer under green down the backstretch, solidly grabbing the lead entering turn three. Duncan held the edge the rest of the way to the win over Rahmer by .914.

Unofficially, Starks leads the Speedweek points by 54 over Zearfoss and 55 over Rahmer.