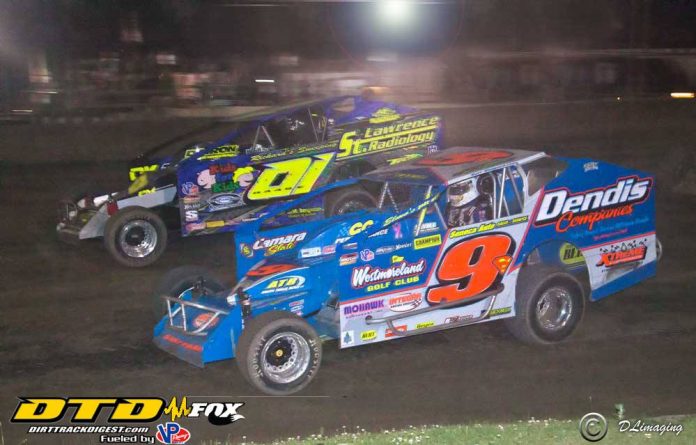 CORNWALL, ONT – Matt Sheppard willed his way to the front of the pack to win the Super DIRTcar Series O’Canada 100 over hometown heroes Chris Raabe and Kyle Ringwall. Sheppard swept the night but did not start on the pole. He took the Billy Whitaker Cars & Trux Fast-Time award, won his Heat Race, but then in the redraw, picked position seven. At the drop of the green flag, Sheppard was immediately on the gas and going to the front. On his way to the the top, the no.9s had to dispatch Series stars Brett Hearn and Erick Rudolph. But it would be the hometown heroes like Chris Raabe who pressured and fought Sheppard for the lead to no avail.

For the second time in three races, Matt Sheppard found himself in Victory Lane. After feeling like he had one stolen away at The Big Show X, Sheppard exacted his revenge on the field. He was very appreciative to the track crew for their preperation on such a hot day.

“I gotta take my hats off to the track crew. Track was in excellent condition. You could run high, low, middle. The track was very racy. This place is not really my style. You gotta be up on the wheel all one hundred laps. You can’t ever relax. It’s pretty darn intense. The lapped cars are intense. The Small-Blocks are so tough here. They run here weekly and they defend their turf really well. I gotta thank my team for giving me a perfect car. Chris Raabe was so good that it took the perfect race car to beat him.”

Sheppard wants to keep the wins coming: “We’ve been rolling around pretty good. This is the exact same car we won with in September [2017]. It was really good and we’re having a really good season so far. Hopefully in the heat of Summer I can keep it rolling.”

The heat and humidity was a factor for drivers, officials, and fans alike. “I’m a little wore out but I am alright. The win will make the ride home a lot sweeter.”


Local competitor Chris Raabe took his DIRTcar 358 Modified out to challenge the Big-Block Modifieds of the Super DIRTcar Series. His car was handling so well he actually threatened to win it all but was unable to upend Matt Sheppard.

“It’s pretty tough when you lose two or three car lengths down the straightaway. I would have liked to have had a few more laps there at the end. We were running him down.”

The difficult conditions didn’t bother Chris Raabe: “When the race car is good, you feel really good. But when the car isn’t handling, obviously you get tired. But I feel fine. The track was in great shape tonight. Hats off to everyone involved.”

Kyle Dingwall ran in the top five all race and managed to capture a podium: “I fell back a little bit at the start. We just kept plugging away there on the bottom. Worked out pretty good.”

Dingwall had an honest and simple take on the heat: “It’s warm and you sweat a lot but you just drink a lot of water and sweat that.”

Super Matt Sheppard rocketed to the top of the speed charts to take his 36th Billy Whitaker Cars & Trux Fast-Time Award. He cleared the second fastest driver, Billy Decker, by almost two tenths of a second.

The next Super DIRTcar Series race is at Land of Legends Raceway in Canandaigua, NY on Thursday July 5th. The Super DIRTcar Series is the premier Big-Block Modified tour of North America. Tour regulars, such as eight-time Series Champion Brett Hearn and current title-holder Matt Sheppard, pit their 800-horsepower Big-Block Modifieds against the best short track racing drivers over a 27-race schedule on 21 tracks from Canada to Florida. In 2018 there are 17 drivers contending for the Series Championship. Follow along for news and notes on Facebook and Twitter.