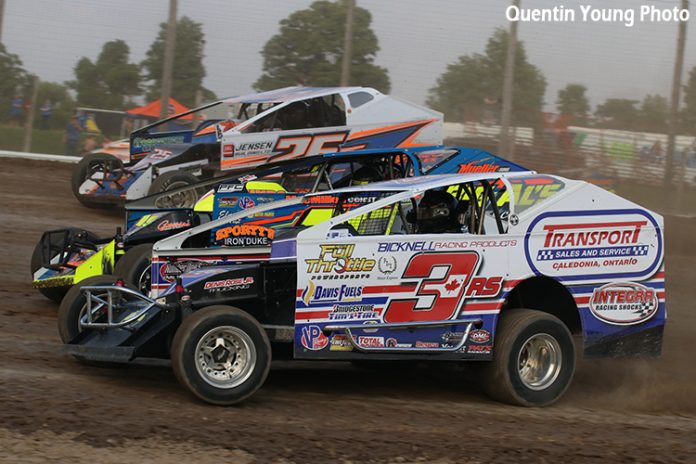 It has been quite a weekend at the local tracks I attend. In a caution free 35 lap Modified race Friday at Brewerton two rookies to the 358 division finished second and third against a full field of potent big blocks. A caution free 50 lap 358 race Saturday ended with a historic first time winner at Fulton. In addition, one of their 25 lap Sportsman features also went green to checkered. Sunday the 30 lap Gene Kotary Memorial Pro Stock feature went green to checkered at Utica Rome. All of these feats took place while the outside temperatures climbed daily during the heat wave we’re experiencing.

I’m really impressed with the drivers that race as hard as they do lap for lap without causing yellow flags to come out. It’s hard enough racing a dirt surface that changes constantly throughout a race. Cautions are almost inevitable as driver’s tires heat up, adrenaline pumps, and muscles fatigue, especially when the outside temperature soars above 90 degrees Fahrenheit. But then again, I did say almost.

When drivers find their rhythm and race with determination to advance from their starting spots to better positions, ultimately to win, they often drive with the upmost respect for the equipment as they push it to the limits of performance. When they all find this place of mental focus we see caution free races.

I also watched as a 59 year old ran away and hid until a caution with 2 laps to go bunched up the field during the Rush Late Model feature at Fulton. Brett Belden overcame the hard charging challenges of Jason Parkhurst to win it. With his first Fulton Speedway win in a Late Model Brett defeated a field of drivers up to 44 years younger than himself and cemented the bragging rights of having won in every type of race car he’s driven over his storied career.


At Brewerton, Fulton, and Utica-Rome I’ve watched 165 laps of caution free feature events over the last weekend. You don’t see that in the internationally syndicated series like Sprint Cup, IndyCar, or Formula One. Think about that for a moment, it will sink in. That’s why I love short track racing so much.

Chris Mackey took a hard ride over the turn one banking, landing upside down on his roof Sunday night at Utica-Rome during the King of Dirt Sportsman 30 lap feature. Fortunately Chris was uninjured and exited the car under his own strength.

As the dust hung in the humid night air at the close of the racing weekend I set my sights for the upcoming week of shows. I’ll be at Weedsport Speedway this Tuesday for the 75 Lap Sportsman Challenge, and even though I won’t be able to attend all of their events, I’ll be praying for the Lucas OIl Empire Super Sprint Speedweek event’s success, as well as the Rush Late Model events taking place.

I can’t believe it’s July and the season is mostly half way behind us at most of the local tracks. We’re celebrating Independence Day in the United States of America on Wednesday, which marks the onset of the hardcore chase for track and series points. Not that teams haven’t been giving their all, but it seems to me that everyone finds something extra this time of year that helps them dramatically on the racetrack.

Finding that edge over the competition isn’t anything new. Our nation was established by patriots that found ways to overcome a much wealthier and more disciplined opponent. They sought outside help, both in people and resources. They fought longer and harder to achieve their victories. They thought outside the box of standard European warfare. They adapted, improvised, and overcame. By doing so they made it possible for us to still reap the benefits of the freedoms they fought for.

After being elected as the first President of our Republic, George Washington once said “It is the duty of all nations to acknowledge the providence of Almighty God, to obey His will, to be grateful for His benefits, and humbly to implore His protection and favor.” Having led the Continental Army to eventual victory over a more formidable foe, George Washington knew of God’s provision of protection and favor as a benefit of obedience and gratitude to God.

Racers can and do experience the same favor and protection by submitting to the sovereignty of God. One of Washington’s contemporaries also knew the Lord intimately, and described his relationship by saying “The name of the Lord (says the Scripture) is a strong tower; thither the righteous flee and are safe (Proverbs 18:10). Let us secure His favor and He will lead us through the journey of this life and at length receive us to a better.
– Samuel Adams”

Jesus Christ, to whom these great men make their references, told us we don’t have to wait until His return to receive His best for us.

The thief He is referring to is none other than Satan, the enemy of our faith. He will do everything he can to destroy us, but Jesus countered that with His own death, burial, and resurrection. That single act of love, Him dying in our place to pay the cost of our sin, is the purpose He came for. It’s by acknowledging His redemptive death and receiving His resurrection by faith that we receive the right and privilege to the rich and satisfying life He promised.

“He came to his own people, and even they rejected him. But to all who believed him and accepted him, he gave the right to become children of God. They are reborn—not with a physical birth resulting from human passion or plan, but a birth that comes from God.
John 1:11‭-‬13 NLT”

“I call heaven and earth as witnesses today against you, that I have set before you life and death, blessing and cursing; therefore choose life, that both you and your descendants may live; that you may love the Lord your God, that you may obey His voice, and that you may cling to Him, for He is your life and the length of your days; and that you may dwell in the land which the Lord swore to your fathers, … to give them.” Deuteronomy 30:19-20”

As we celebrate our political freedom and national independence let’s devote some time, as Samuel Adams implored, to honor and thank God for the blessings in our life because we get to live here by restoring Him to the throne of our hearts.

“We have this day [Fourth of July] restored the Sovereign to whom all men ought to be obedient. He reigns in Heaven, and from the rising to the setting of the sun, let His Kingdom come.
– Samuel Adams”

We’re always available if you’d like to know how to enter into a personal dynamic relationship with our God or how to enrich your walk with Him. We’re always grateful to the racetracks that open their gates and hearts to the work of the ministry we’re providing. Everyone have a safe and blessed holiday. We can be reached on Facebook at Finish Line Chaplain, or at Kevin Westcott Ministries, and by conventional email at flchaplain@windstream.net should a need arise in your life we can assist you with.