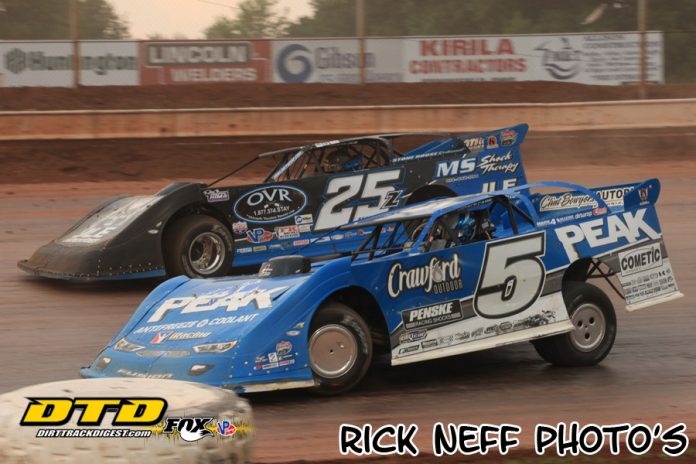 O’Neal took the lead on lap 14 from Mason Zeigler, who finished in second. Zeigler chased down O’Neal in the final laps but came up short in his bid for his first win of the season. Last year’s winner, Josh Richards, finished in third. Current series point leader Jonathan Davenport crossed the line in fourth. O’Neal’s Clint Bowyer Racing teammate Darrell Lanigan finished in fifth.

Zeigler was looking for a clean sweep of racing activities as he set the Miller Welders Overall Fast Time and won his heat race to earn the pole starting position in the 50-lap main event. Zeigler took the lead at the start of the race. For the first 13 laps Zeigler held off Earl Pearson Jr., Davenport, and O’Neal for the top spot until O’Neal forged ahead on lap 14.

“It’s pretty cool to equal Clint now in wins this year. Hopefully I will get a lot more than him by the end of the year,” said a smiling O’Neal during his 45th appearance in Lucas Oil Victory Lane. “My hat is off to this Peak car, we have been great the last two nights. It’s all because of my crew that I am winning races right now. This crew works their tails off to get it done.”


“Thanks to everybody at Clint Bowyer Racing. I hope we keep this thing rolling. It feels good to run well, especially after Portsmouth where we tore up a bunch of stuff. We got up early yesterday to get everything fixed, and it all paid off after last night,” said O’Neal, who won the previous nights’ LOLMDS race at Mansfield, OH.

Zeigler earned his first podium finish of the year and was pleased with his performance. “Near the end of the race I got held up and wasn’t quite able to catch Don [O’Neal]. He was better than us. I was just hanging on for a while tonight and wasn’t expecting to begin catching him late in the race. He just had a better car and we were a second-place car and that’s exactly where we ended up. We needed a good run and that’s what we ended up with,” said the driver of the JLE Industries, Rocket Chassis.

Richards was trying to repeat his 2017 series win at the historic track. “The race was pretty good for the most part. We just have to get a little better. Don has been great. Those guys over there have done a great job the last few nights. They have got something figured out.”