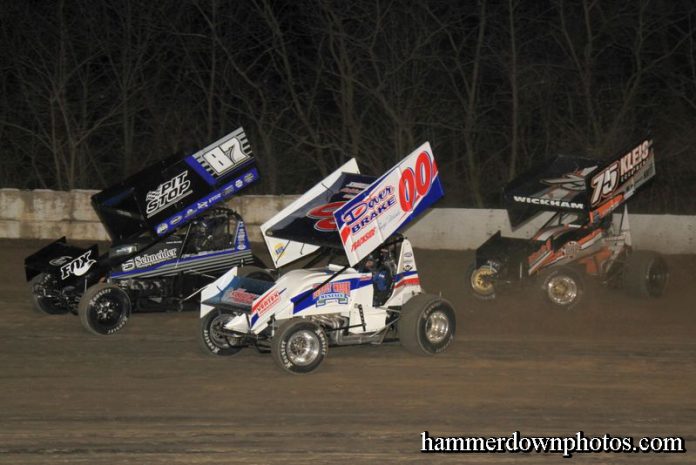 Well just like that another year has cycled around and Donath Motor Worx Central New York Speedweek for the Lucas Oil Empire Super Sprints is upon us.  It’s hard to believe that it’s already the beginning of July.  Where did the year go? Is it just me or is it the older you get the faster the year goes?  I feel like we just got done with Speedweek and yet it’s already gone full circle and we are ready to get back at it again.

For those that are new to the Northeast racing scene, Donath Motor Worx Central New York Speedweek is a grueling five night stretch for the Empire Super Sprints that has them competing at five different tracks all located within roughly an hour of Syracuse.  The week kicks off on Wednesday, July 4 at the Can-Am Speedway before heading to the Land of Legends Raceway on July 5 with the Super DIRTcar Series big-blocks.  From there Brewerton Speedway gets up to speed on Friday, July 6 before a stop at the Fulton Speedway on July 7.  The week wraps up with the winged warriors invading the Utica-Rome Speedway on July 8 with the Super DIRTcar Series a second time.

For the first time ever the series will compete all five nights with either big or small-block Modifieds.  As I mentioned there are two Super DIRTcar Series events while the Pabst Shootout returns to the Can-Am Speedway on July 4.  That means the DIRTcar 358-Modifieds will race for $2,500 to win to open the week.  Friday night the big-block Modifieds are scheduled at Brewerton while the small-blocks join the Empire Super Sprints on Saturday at Fulton.

Now, as I’ve done the last several years, it’s time for some predictions.  The one thing I’ve learned the last few years is that I’ve been wrong 90 percent of the time so I apologize because I’m basically putting the hex on whoever I pick to not win on that night.  On the bright side it seems the guys that I’ve picked have had wins during the week, just not at the tracks that I’ve chosen.  So that could be a perk.  I have yet to properly pick a champion, but hey it’s all about fun and sometimes going out on a limb.  Maybe, just maybe, this is the year I get it right.


Lastly and most importantly, these picks are purely for entertainment and fun.  It’s a great week and one of my favorites of the year.  The competition is fierce, the racing is great and overall it’s a fun time with awesome people.  With that said, I know you are all waiting anxiously my picks so here we go.


Prediction: The Can-Am Speedway pick is usually one of the more difficult choices as a lot of drivers have been able to reach victory lane there the last few years.  Just looking at the rundown, two of the last four Speedweek winners were invaders.  So do you go with a series regular or is an invader the right choice?  Well, I’m going invader this time.  I’m picking Mark Smith to pick up the victory to kick off Speedweek.  Smith is always consistent and right now plans call for him to compete in all five nights.  I’m saying he gets the win on opening night as he’s been hot so far this year winning multiple 360 shows along with having a 410 win as well.

Prediction:  Can I pick the same driver two years in a row?  Heck it might even be three I’m not sure.  The favorite whenever the series invades Land of Legends Raceway (Canandaigua) has to be Chuck Hebing.  It’s his local track and he always ends up near the front of the pack.  He’s had a strong year so far in 2018 other than a couple of Pennsylvania hiccups.  I believe he gets it done on Thursday night at Land of Legends.


Prediction:  For my Brewerton Speedway pick I’m going local as well as Jason Barney will take the win on Friday night.  Barney has never won the Speedweek event at Brewerton but is always on the podium.  I think he finally knocks one out this year.  His last win at Brewerton came in 2015 so he is due and this is the year.  It would be a popular win as many friends and family are in town this week.


Prediction: Now that I picked Barney to win at Brewerton I don’t think I can pick him on back-to-back nights even though he’s been the most consistent at Fulton Speedway the last several seasons.  He has won three out of the last seven and nearly won the first event in 2018 at Fulton if not for a hard charging Paul Kinney.  So if Barney isn’t the pick, I’m taking Steve Poirier.  Poirier, like Barney, is good at Fulton.  He finished in the top five in the opening event this year.  He has one ESS win this season, which even in limited action, is very uncharacteristic for Poirier.  At Fulton he’ll get his second.


Prediction: Utica-Rome Speedway is almost always about who is riding the hot hand.  That doesn’t necessarily mean with the tour but at Utica-Rome.  Whoever ends up figuring something out at Utica usually rides that to a winning streak.  So for that reason I’m taking Danny Varin.  Varin is consistently good at Utica-Rome as of late.  Varin didn’t win a few weeks back but he was in the top five in a 25-lap non-stop feature.  I think he gets it done on Sunday night to wrap up Speedweek.

Prediction: Who will win the championship?  This pick is always a challenge because there is just so much talent in the field night in and night out and one mistake, one bobble and you can say goodbye to a title.  It’s all about being consistent and finishing near the front night in and night out.

Over the years I’ve had several different picks.  As always I polled some other Dirt Track Digest media members and the consensus pick again was Barney.  He’s good at all five tracks was what I heard over and over.  Varin’s name also came up as he is the defending Speedweek champion.  The current point leader Coleman Gulick’s name also was mentioned as a contender.  He doesn’t have the same track record in Central New York but he’s having a great season so far.  He could stay hot and get the title.  One last name that popped up was Davie Franek.  Franek is the current high point man at Selinsgrove Speedway and a former United Racing Company champion.  The New Jersey driver has the pedigree to get it done, but not as much experience in Central New York as the others mentioned.

With that said, I’m going against the names that came up and choosing Mark Smith.  I haven’t been right yet picking a regular so why not pick an invader.  Smith is having a phenomenal year.  He’s clicking at the right time.  He’s gained valuable Central New York experience that last couple years.  This year, with no conflicts, he’s scheduled to run all five nights.  Because of that, I think he is the man holding the trophy at the end of the week.

For complete information about each event for the week CLICK HERE or you can visit www.empiresupersprints.com.