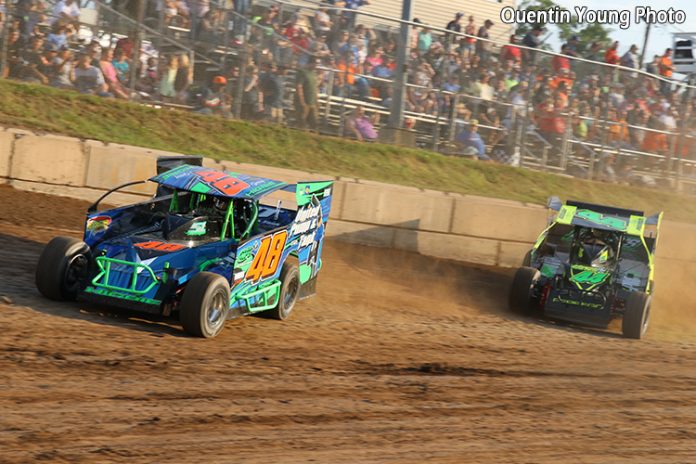 ACCORD, NY – It was a night to remember for the proprietor of HigFab Chassis’ from Goshen, NY. A big win in front of a packed house, a statement win for his team and car owners and the ability to sell the win as another reason to buy his brand of chassis.
28 cars took the green on the tight confines of the Accord oval for 50-laps of hard fought racing. Pole sitter Stewart Friesen took advantage of that pole spot by setting a torrid and unrelenting pace for the first 10-laps.

Friesen was quenching the field with ease. Just eight laps into the feature he hit lap traffic. However, just two laps later the unthinkable would happen.

As Friesen entered turn four on the 10th lap, he inexplicably lost control of his Halmar sponsored DKM Chassis all by himself and spun out, costing him the lead and the race win.

Friesen would spend the last 40-laps of the night fighting his way through lap traffic to garner a very hard earned ninth place finish at the end of the night.


With the field regrouped it was back to work on lap 10. As the field came around to the front stretch, Perrego disposed of Jeremy Smith for 2nd. A caution flag flew on lap 11 and the field went back to work again on lap 14.

Eight-laps later on lap 22, Jerry Higbie and Anthony Perrego hit lap traffic. Side-by-side they diced through traffic. Perrego was so close to the lead he could taste it but he couldn’t get passed Higbie.

The caution came out on lap 28 for the 97 of Danny Tyler for a broken shock.

Once again the field tightened up and it was off to the races again for Higbie and Perrego and company. Caution flew again on lap 35 and as the field restarted the caution flew immediately again. This time for a melee involving Mike Mahaney, Brett Tonkin and Rick Laubach in turn two. Also involved in a separate incident was Ryan Godown. He pounded the right front wheel of his Searock Racing & Fabrication sponsored car into the back-stretch wall ending his night early.

With 15 laps to go in the 50-lap Battle of the Bullring the top five running order was Higbie, Perrego, Smith, Creeden, Williamson.

The final yellow flew on lap 39 for Tyler Dippel, and Brian Krummel who had a jingle in turn one.

With a clear track and just 11 laps left, Higbie and Perrego would have one more crack at each other for the $5000 winners prize. In the end though, Higbie was untouchable. He made it look easy in cruising to his first ever Short Track Super Series race win.

“Early in the night I knew I had a solid car underneath me” said Higbie. “When Friesen spun out I was shocked but at the same time I knew we had a real chance at victory. I was passed early on by Jeremy Smith but once I got by him the car was perfect. Steve and Jamie (Lowitt) put their heart and soul into this program and this win is all about them. It’s also about our customers and it’s a big win for HigFab. It’s a statement win about our cars which are winning everywhere but not with guys like Sheppard and Decker. Little guys that are working their tails off to get that first win or that first top 5. This is who this win is for”.

Runner-up finisher Anthony Perrego was physically drained from the race and the heat as he sat on the right front tire while drinking a cold bottle of water of his Superior Remodeling Tuf Motorsports Teo in victory lane.

Perrego has been the car to beat at nearby Orange County Fair Speedway in both big block and small block modified competition.

“I never thought it was going to be this hard to get back into the racing game after sitting out for a few years. I thought I would get a Bicknell chassis and a motor and I would be competitive. That’s far from the case. We’re finally getting our motor program to where we need it to be and I am getting more comfortable with the American Racers. Tonight, was hard because the top two guys are regulars here. They have the inside knowledge for me it was a guessing game.

“It seemed that the car got better on longer runs. Maybe because heat was finally getting into the tires. It was good night for sure and we will surely take it,” said Smith.

“The Superman” Matt Sheppard had an abysmal night in the Hurlock Auto & Speed 9S. He went to a back up car and had to use a provisional to make the feature. Finishing a distant 15th is not what you expect from a guy that has been destroying the competition with ease nearly everywhere he goes.

According to his crew chief Randy Kisacky, “we bent the front axle in the feature and there was no bottom. The cars were just flying around the top side. Matt usually does his damage working the bottom side of the track.”

Making the longest haul of anyone in the feature was Mat Williamson. Hailing from St. Catherines Ontario, CA. An 8 hour drive to the track paid off. He’s in his first year on the STSS. Williamson is driving for Jeff Behrent, scored an impressive sixth place finish to score the Hard Charger Award. “F ! Its hot,” said Williamson as he exited his car in victory lane. He was pouring water over his head to cool off.

“It’s good hard racing at there. I was leaning on Jimmy Wells there at the end. He leaned on me. It’s a good night for someone who has never even seen this place let alone ever raced here.”…

At around 4 p.m. a Severe Thunderstorm warning was issued by the National Weather Service. It rained all around the speedway, but no rain fell at the speedway. Thunder was heard overhead but the program went on as scheduled and was done just before 950 p.m…

After being disqualified at Orange County in the 358-race last Saturday Danny Creeden got some salvation back with a 4th place finish in his Westar sponsored Teo.

“This is my favorite motor in this car. We were at Teo all day yesterday working with Matt Hearn to get the car tuned for here. This was a good night. A few weeks ago, I sat on the outside pole here in a regular Friday night race. People were probably betting that I was going to win. If they had bet, they would have all lost their shirts and houses.”

“We will be back, but we will have the right carb,” said a smiling Creeden…

Stewart Friesen had motor issues at the end of his win last weekend at Fonda. The team had already missed the Brewerton Super DIRTcar Series race, so they took the day and elected to miss the Series race at Cornwall to do some repair work and prepare for Canandaigua on Thursday night. Friesen will be back in CWTS action on July 12th from Kentucky and then all eyes will be on the Eldora Dirt Derby on Wednesday July 18th…

The Halmar racing team will celebrate the Independence Day holiday and Military Night at Orange County this Saturday with unique paint schemes on their cars. Look for wraps to showcase the branches of the military and camouflage. The 358’s are the main division this week as the big blocks are off.