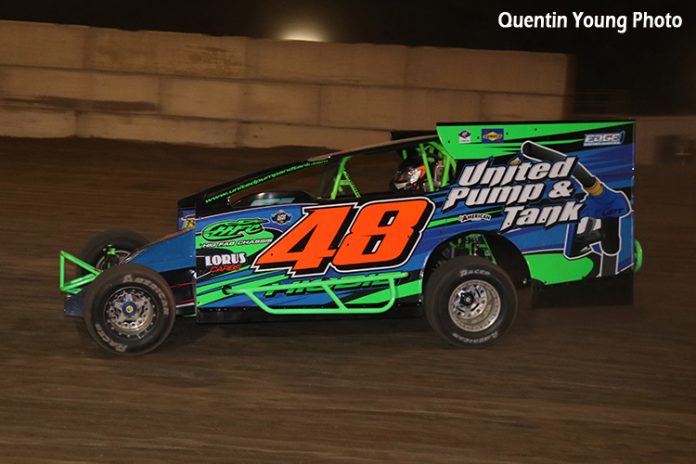 ACCORD, NY – Home-track advantage played into the hands of Jerry Higbie on Tuesday night at Accord Speedway.

Higbie, a regular at the quarter-mile oval on Friday nights, pocketed $5,200 for his efforts with the Steve Lowitt-owned No. 48 in Race No. 3 of the series’ Halmar International North Region: $5,000 from the posted purse and $200 courtesy of Superior Remodeling as the Halfway Leader.

“I’ve always wanted to win one of these (Short Track Super Series) races,” Higbie said. “I felt this race would be our best shot at it. I have the most laps here. We got a couple of good draws tonight, we had a fast car and I couldn’t believe it when Stew spun. Stuff happens fast here.”

Higbie’s aforementioned ‘Stew’ referred to Stewart Friesen, the Modified superstar turned NASCAR Camping World Truck Series driver who picked the pole via a redraw of top qualifiers prior to the start of the feature.

Friesen’s Halmar International No. 44 launched off the front row and set a blistering pace during the race’s opening laps while Higbie, who started second, ran in the runner-up position.

However, the race took a dramatic turn on lap 10 when Friesen, who was encountering the back of the 28-car starting field, spun in turn three to draw the yellow.

Higbie now had control of the field driving a Hig Fab Chassis he built in his own shop.

While Higbie led the race’s remaining 40 laps, it was far from an easy drive.

Current Accord Speedway point leader Anthony Perrego, who started eighth in Brian Smith’s Superior Remodeling No. 44, emerged as a contender. Perrego, during longer green-flag runs, pulled up to Higbie’s back bumper, diving to the inside of the leader.

“These kids are young and fast,” Higbie said of his challenger in Perrego.

Higbie became the 24th different winner in 55 STSS events contested since the series was formed in 2014.

“Jerry had a good car tonight,” Perrego said. “I thought I had a chance on the longer runs, but I couldn’t get there.”

Jeremy Smith of Triangle, N.Y., turned his 2018 STSS misfortune around with a strong third-place finish. Smith exchanged the final podium position in the race’s late stages with Wurtsboro, N.Y.’s Danny Creeden, who drove to a fourth-place result after starting 10th.

After rolling off the grid in 16th, track regular Jimmy Wells of Rosendale, N.Y., completed the front five.

St. Catharines, Ont., driver Mat Williamson was the race’s Land Hoe Maintenance LLC Hard Charger, receiving $200 cash and a number of product certificates after driving the Behrent’s Performance Warehouse No. 3 from 22nd to finish sixth in his debut at the speedway. Mike Gular of Boyertown, Pa., authored another steady drive to finish seventh in the Terry Fasnacht-owned No. 2A, followed by Billy Decker of Sidney, N.Y., who started 21st after a heat-race melee; Sprakers, N.Y.’s Friesen, recovering from his spin; and Tyler Siri of Horseheads, N.Y., who ran inside the top-five for much of the event.

Montour Falls, N.Y., driver Dale Welty invaded Accord Speedway for the first time in his long career and walked off with a $1,000 STSS Sportsman payout in the division’s wild 25-lap feature.

After a rough-and-tumble first half of the main, green-flag racing prevailed in the race’s second half. Welty, Corey Cormier and Kyle Rohner battled three-wide lap after lap for the top spot.

In the end, Welty’s high-side momentum carried him to the Sunoco Race Fuels checkered flag.

“This track reminds me of my home track Skyline Raceway Park (in Blodgett Mills, N.Y.),” Welty said. “I never ran here before today, but I’ll be back. You can run all over this place.”

Cormier settled for second after working the inside of Welty, with Rohner, Travis Green and Daniel Morgiewicz completing the front five.

BULLRING BITS: Rain and lightning circled the speedway throughout the afternoon hours, with a brief shower at approximately 3:30 p.m. Precipitation was reported south and west of the speedway, but the show went on in its entirety….

The Modified feature was in the books by 9:37 p.m. after the night’s events started at 7 p.m. in a fast-paced show….

Rough night for leading Northeast winner Matt Sheppard, who required the use of a provisional to make the main event. Sheppard had switched to a back-up car for the consolation and struggled to 15th after getting entangled in a melee near the end of the 50-lap main….

The Jeremy Smith team, despite a heat-race tangle for Billy Decker, emerged with three solid finishes: Smith’s third and Decker’s eighth in the Modifieds plus a ninth-place run in the Sportsman for Darren Smith….

Up next for the Bob Hilbert Sportswear Short Track Super Series Fueled By Sunoco is the rescheduled ‘Anthracite Assault’ North vs. South combined point event at Big Diamond Speedway in Minersville, Pa., on Monday, July 16. Joining the STSS Modifieds (50 laps, $5,000 to win) on the card are STSS Sportsman racing for $1,000 to win (20 laps) and XCel 600 Modifieds (20 laps).

BATTLE OF THE BULLRING 6 RESULTS SUMMARY – ACCORD SPEEDWAY JULY 3, 2018