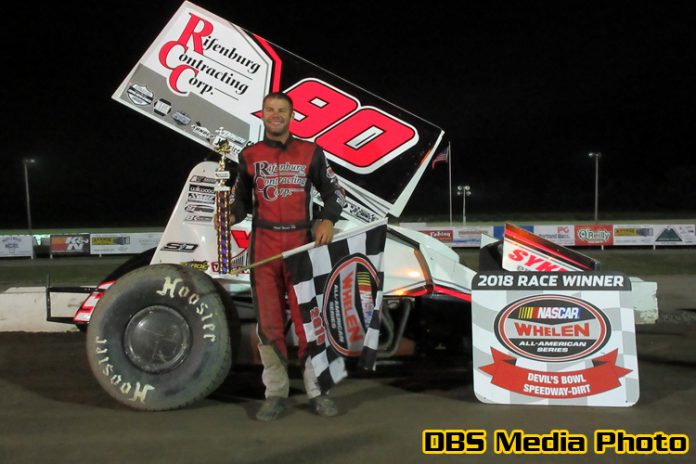 Brent Warren, Chris Murray, Jason Porter, and Brandon Emerson also visited victory lane during the event, which was presented by Bruno’s Towing & Recovery. In addition to the racing, nearly 40 young fans went home with brand new bicycles during the annual Kids Bike Giveaway at intermission, and Northstar Fireworks lit up the sky with an incredible display to celebrate the nation’s birthday.

Tanner, of Stephentown, N.Y., was not the star of the 25-lap SCoNE show until the end. Local driver James Hanson of Orwell, Vt., continued a string of recent strong runs at his home track and led the first 21 laps of the race. Tanner, a regular on the Empire Super Sprints tour, ran most of the race in a second-place battle with Bobby Hackel before both reeled Hanson in late in the going.

Tanner made a slick move with four laps left to take the lead and sailed to the win, kicking off a schedule of six-straight nights of competition for the traveling racer. Former Devil’s Bowl Sportsman Modified champion Hackel used a small 305-cubic-inch engine – lacking around 250 horsepower compared to the 360s used by the rest of the field – to get by Hanson for second. Hanson held on for third ahead of Dan Douville and Scott Holcomb. Will Hull, Matt Hoyt, Jake Williams, Kevin Chaffee, and Jordan Fornwalt rounded out the top 10. Troy Comeau walked away uninjured from a vicious five-time flip in his qualifying heat earlier in the evening.

Like Tanner, East Corinth, Vt., driver Pierson was not the star in the 30-lap Sportsman race until the later stages. Rookie Jeff Washburn turned a tough learning season around by leading the first eight laps before Alex Bell and Jake Scarborough made their way through and put on a dazzling show. Bell and Scarborough traded the lead several times, but Scarborough’s night went sour when he spun off the backstretch.


A series of caution flags jumbled the order, but when racing resumed, Bell and Pierson squared off. Bell was quick on restarts, but Pierson – who started 16th – was strong on the inside lane and took over at lap 20. Several key players came into the mix as Bell’s car began to fade, allowing Vince Quenneville Jr. to challenge Pierson before settling for the runner-up finish. Jack Speshock drove from 18th to finish third, Jimmy Ryan survived the Scarborough scrape to take fourth, and point leader Kenny Tremont Jr. ran from 15th to fifth. Tim LaDuc finished sixth in front of Justin Comes, Trevor Rocke, Billy Lussier, and Josh Sunn.

Hometown driver Chris Murray of Fair Haven, Vt., did it again in the Super Stock class, winning for the fourth time in six starts in 2018. Josh Bussino made a late bid following a restart with four laps to go in the 20-lap race, but Murray held him off. Bussino, Scott FitzGerald, early leader Lou Gancarz, and Kevin Elliott completed the top five finishers.

Jason Porter had an enjoyable 260-mile drive home to Freeport, Maine, after taking his third Portland Glass Mini Stock win of the year. Porter needed just five laps to drive from 12th to lead, but had plenty of company up front for the balance of the 15 laps. Shawn Moquin scored his best effort of the season with a close runner-up finish, and P.J. Cram did the same in third place. Tim Simonds and Erin Aiken were next in line.

Brandon Emerson of Williamstown, Vt., became the first repeat winner of the year in the Friend Construction 500cc Mini Sprint division when he powered his way from 12th to the win in a 20-lap feature. Eleven year-old sensation Derrick McGrew Jr. finished second in his first start as a teammate to Emerson. Erick Mulready finished third with his cousin Samantha Mulready fourth and Mike Bradley Jr. fifth.

All five weekly divisions will be on the card, along with the first event of the year for the Ladies Mini Stocks. Regular general admission is $12 for adults, $10 for seniors, $5 for teens (13-17), and free for kids age 12 and under. Racing starts at 6:00 p.m.