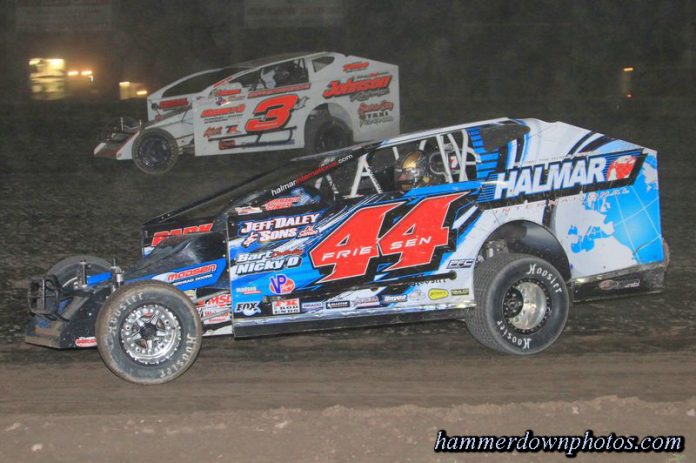 VERNON, NY- The most anticipated show so far of the 2018 Utica-Rome Speedway season is upon us this Sunday, July 8, as Clinton Tractor and Broedel Energy presents the Central New York Speedweek finale for the Lucas Oil Empire Super Sprints, the “Freedom Fighter 100” for the Super DIRTcar Modified Series, plus the Broedel Energy Sportsman. This event is always a fan favorite and was one of the most talked about events of the season in 2017.

Last season, Stewart Friesen took home the $6,000 payday in this event to add to his total as the all-time feature winner at Utica-Rome Speedway, but the everyone left talking about the “incident” that happened in the later stages of the 100-lap main between Matt Sheppard and Larry Wight. When the dust settled, Sheppard served out a suspension, and vented his frustration on the competition for the remainder of the season as he won nearly everything in sight for the remainder of the season. Sheppard overcame the point deficit from the suspension to claim another Super DIRTcar Series title in 2017 and he comes into this weekend with 19 wins in 2018 and holds a slim lead in the 2018 series standings. Max McLaughlin currently holds the second spot ahead of teammate Jimmy Phelps, Erick Rudolph, Tim Fuller, Peter Britten, Brett Hearn, Danny Johnson, Billy Decker, and Friesen. Weekly competitors Pat Ward and Billy Dunn hold the 11th and 15th spot in the standings respectively. Out of four events completed in to 2018, Sheppard has won two while Friesen has taken the wins in the other two. Will these two goliaths of the Modified division continue their series dominance, or will someone rise to the occasion and find victory in the Freedom Fighter 100?

Now in its sixth running, the Donath MotorWorx Central New York Speedweek for the Lucas Oil Empire Super Sprints has become one of the most anticipated weeks in the region among fans. All roads lead to Utica-Rome Speedway when it comes to deciding the CNY Speedweek champion which always adds to the already thrilling atmosphere of this event. Last season, Danny Varin came into the night in tight three way point battle, and when the other two contenders had issues, Varin took advantage of the situation to claim the 2017 title. Who will claim the title this Sunday? That is a question that will be answered in just a few days, but with drivers such as Varin, Jason Barney, Coleman Gulick, Matt Tanner, Billy VanInwegen, Matt Billings, Paulie Colagiovanni, Paul Kinney, Steve Poirier, Mike Mahaney, Shawn Donath, Mark Smith, Davie Franek, and more all in the mix, it will be a battle right until the end. Michael Parent (2013), Barney (2014), Poirier (2015 and 2016), and Varin (2017) are past champions of CNY Speedweek. Donath was the latest winner for ESS at Utica-Rome back on June 17.

Adult admission is set at $30 for adults for this huge show with children 16 and under admitted for just $5. Students, Military, and Senior pricing is set at $27. Pit gates will open at 4 p.m. with grandstands opening at 4:30 p.m. Racing is slated to begin at 7 p.m.