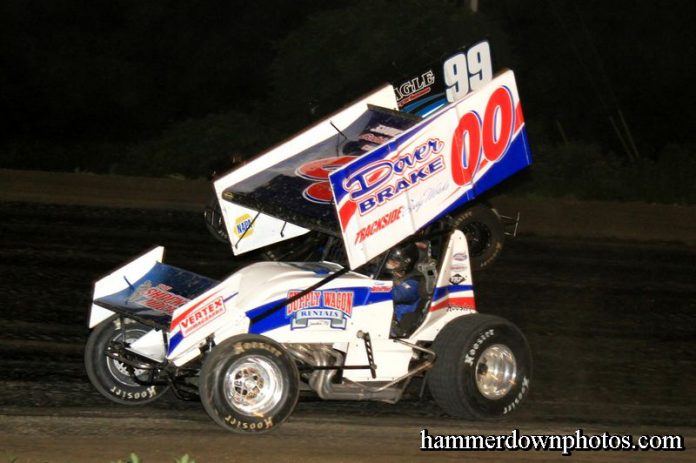 LaFARGEVILLE, NY – Opening night of Donath MotorWorx Central New York Speedweek came down to the final corner of the final lap. The winner wasn’t decided until the three cars vying for the win exited the fourth corner. As the checkered flag flew, Danny Varin was able to cross the line first for the $2,585 victory to kick off his Speedweek title defense.

“It’s a long week,” said Varin about starting his title defense with a win. “It’s going to be a long week. It is a grind. It’s nice to be standing here. We love these Sprint Cars and just the opportunity to drive one is appreciated.”

Varin, Shawn Donath and Mark Smith swapped spots within the top three for the final five laps of the 25-lap kickoff event at Can-Am. Eventually Varin made the winning pass in turns three and four on the last lap to earn the win in the Mach 1 Chassis, NAPA Auto Parts, E & V Energy A-Main event.

“The car was fantastic,” mentioned Varin. “I can’t thank my guys enough. Unfortunately, Dave Cruickshank, my car owner, couldn’t be here tonight because it was a little too hot, but we are going to call him tonight and tell him. My hats off to all the guys we race against. These guys are so good. We got to do our homework if we want to beat them.”


Donath raced out to the point from his pole starting position on the initial start of the race. Donath was shadowed by outside pole sitter Mike Kiser for the first few laps. Kiser secured the lead on lap four on the outside of turns three and four only to have Donath come back by him a lap later on the bottom of turns one and two.

After dispatching of Kiser, Donath tried to run away from the field only to have Varin move into the second spot on lap seven after starting 10th. At this point Donath’s lead was a half straightaway over Varin and the rest of the field.

His lead started to dwindle on lap nine as he encountered the backend of the field. Donath was forced to alter his line allowed Varin to gain ground. Eventually he drew close enough to pull even with Donath for the lead.

Varin dove low in first corner to get under Donath and by the time they raced on the backstretch he had the lead. Varin brought the field to the line on lap 12 as the leader.

A lap later the only red flag of the night was necessary as Dylan Swiernik went end-over-end in turn three. Although it was a nasty tumble, Swiernik was able to walk away from the incident unscathed. At this point the top three were Varin, Donath and Smith. That was how they came back to green when action resumed.

Varin utilized his lane choice to get a strong restart on Donath pulling away slightly by the time the field entered the backstretch. Although had his sights set on Varin, Donath had to contend now with Smith. Smith worked over Donath and eventually went around him to secure second on lap 18.

Business picked up on lap 20 as traffic was an issue for the leader Varin. As Varin searched for the fast line both Smith and Donath closed the gap. Donath found a line around the extreme top on lap 23 allowing him to take the lead off the exit of turn four.

Varin didn’t go away and neither did Smith, they both hung with Donath and were there to pounce when he made a mistake on lap 24. Both Donath and Varin went to the outside and it looked like Smith was going to get the top spot, but he and Varin came to the line together to take the white flag after Donath bobbled.

On the final lap Varin and Smith raced side-by-side with Donath right there in the mix. Smith made one last attempt to get the lead and the win in turns three and four only to have Varin drive back by for the victory.

“The outside just got so far out and I hit it wrong,” stated Varin. “I thought I threw it away, I really did. Donath showed me his nose on the bottom and I couldn’t believe how good it came in. We were able to hit one good lap there and grab back the lead.”

Smith, of Sunbury, Pa., had his shot at the lead. He just wasn’t able to catch the right line at the right time.

“I had a good race and good fun there,” commented Smith. “When he missed the corner down here I tried something in the next corner to make up some time on him and it really killed me. Then they got on me from behind. It was game on from there. I almost had the pair of them down there but I used my tires up. It was a good, fun race. I love this place. It is a really cool race track.”

Donath, coming off a win in the last Empire Super Sprint Event, ended the day third. Although he had a good enough car to win, hopping the cushion on the outside of turns three and four caused him to fall back to third.

“To have shot at it, these guys are both phenomenal so I can’t be any happier with our chassis program or our engine program,” commented Donath. “Right now my guys are all clicking. Everyone is doing what they are supposed to do. All you can do is ask to be in the mix. I hope it was as exciting for the fans as it was for me. That was pretty cool”

A field of 36 sprints filled the pits in front of a capacity crowd for rookie promoter Tyler Bartlett.