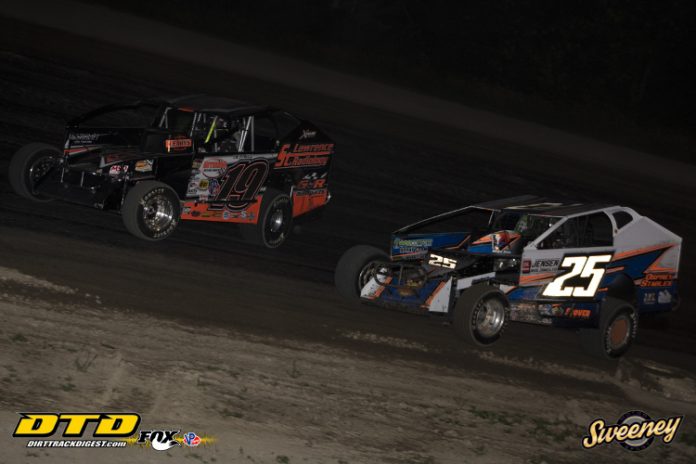 LARGARGVILLE, NY – Bobby Herrington was a surprise winner on Wednesday night at the Can-Am Speedway as he made a last lap, last turn pass of Tim Fuller to win the 35-lap Pabst Shoot-Out feature event.  Herrington earned $2,500 for the win.

“I definitely wasn’t expecting to be here,” said an elated Herrington in victory lane.

Rylee Gill got out to the early lead from his front row starting spot before Can-Am Speedway point leader Billy Dunn drove by for the top spot before the lap reached lap five.

By lap 10 it was a two car race at the front with Dunn leading and Tim Fuller pressing him.  Dunn worked the low lane while Fuller utilized the middle and top grooves on the speedway.

A caution on lap 11 for a spinning Ryan Bartlett bunched the field up.  At the green Dunn held the lead with Fuller right off his right rear.  Fuller eventually was able to get enough of a run off the middle line in turns one and two to drive by Dunn for the lead on lap 14.


Dunn never let Fuller get too far away as he stayed with the Edwards, N.Y., native.  Dunn inched even closer as the field caught traffic on lap 25.

One lap later Gill slowed with problems on the rear of his No. 57 to bring out another yellow.  Fuller kept Dunn at bay as the race went back to green.

Dunn was all over Fuller for the lead only to have something let go on lap 32 causing him to slow heading into turn one.  This necessitated another caution flag situation.

Fuller was flanked by Lance Willix to his outside for the green with Herrington refiring third.  Herrington got the great restart getting by Willix for second.

Herrington, working the bottom, kept pace with Fuller at this point.  He nearly pulled even with Fuller as they completed lap 34.  That allowed him to get underneath Fuller heading into the first corner on the final lap.

“He kind of tried to pinch me getting into one but he left me a lane,” mentioned Herrington.  “That kind of screwed up my entrance getting into one.  I knew what to expect when going into three.”

The pair were side-by-side as they raced down the backstretch.  Herrington went low in turns three and four and was able to get enough of a run to slide up in front of Fuller coming off the turn to beat him to the checkered flag to take the win.

“At halfway were really good,” stated Herrington.  “The first few laps the car faded away a little bit, but it rotated the bottom really good the last couple laps there.  Fuller is as good as it gets so to beat him is pretty awesome.”

Fuller had to settle for the runner-up position while Willix crossed the line third.  Chris Raabe and Louis Jackson Jr., completed the top five.