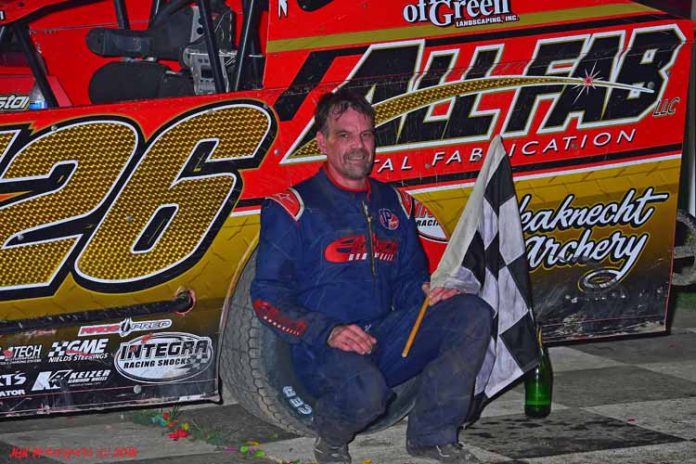 On a very hot and steamy night at the Grandview Speedway it was the “Bechtelsville Bullet” Jeff Strunk who burned the competition to take the victory in the Modified portion of the annual Thunder on the Hill PA Speedweek show.

The night didn’t start out to well for the Strunk as a problem in his heat race relegated him to start 23rd in the 30-lap main event. From there the 10-time Grandview track champion did the unimaginable on a track that doesn’t usually offer too much passing after the powerful 410 Sprint Cars run their feature race.

“It was a little tough after the heat race,” mentioned Strunk. “But hey, it’s part of the game and you have to keep your chin up and just keep digging and that’s what we did. We have a really good car for here so that helps my confidence every time we’re on the track and tonight’s only going to help out that much more. We’ve been good in all of the conditions. We are good on a heavy track and a dry track but to be that good on a track like tonight is exceptional.”

After the scintillating PA Speedweek Sprint Car feature won by Monster Energy Cup Series star Kyle Larson that left the crowd on the edge of their seats, it was going to be a tough sell for the 358-Modifieds to top what just happened. Depending on if you are a bigger fan of the Sprints or the Modifieds would determine if they were successful or not. The Modifieds definitely put on a show to be remembered thanks to the Grandview track crew. The crew headed by Kenny Rogers and Brad Missimer worked their magic to give the tracks signature weekly division a great track to race on. The track was prepared just right to allow multiple grooves for the drivers to race on.


Jared Umbenhauer and Ryan Watt led the field to green and what a show these two drivers put on for the fans. Watt grabbed the lead at the onset with Umbenhauer glued to his bumper as the laps clicked off. Watt was able to fend off Umbenhauer through multiple early race restarts and continued to lead the way.

While the battle raged on up front the eyes of the standing room only crowd were beginning to take notice of the Glen Hyneman No. 126 of Strunk as he was methodically working his way toward the front. While Strunk was picking up spots lap by lap the two leaders now had Craig Von Dohren to contend with as they raced side-by-side through the long green flag run. Von Dohren raced right behind leaders just waiting for a hole to open up so he could make his move.

By this time Strunk had worked his way past Doug Manmiller and Tim Buckwalter to move into the fourth spot as track announcer Jeff Ahlum was whipping the crowd into a frenzy with his call of Strunk’s charge to the front.

Then came the break Strunk was waiting for as Brian Papiez coasted to a stop bringing out the caution on lap 21 allowing Strunk to catch the leaders. The crowd was anticipating what was going to happen next and when the race restarted with nine laps remaining Strunk didn’t disappoint them. Going into turn one as the took the green Strunk made his move past Von Dohren, running the high side Strunk continued his march to the front by going around Umbenhauer as the made their way off of turn four with now only Watt between him and a legendary win.

Watt hung tough but was no match for the relentless Strunk and by the time lap 24 was scored Strunk was your new leader. The driver affectionately known as the “The Prez” raced under the checkered flag to score the win in front of a shocked crowd that showed Strunk their appreciation with a rousing round of applause.

Following Strunk across the line were Watt, Von Dohren, Umbenhauer and Manmiller.

The extreme heat didn’t seem to bother Strunk afterwards as he signed autographs and took pictures with his many fans standing next to his winning car at the team’s trailer.

“We have a really good car and you can never stop believing.  When they watered the track before our feature I knew we had a shot. I still wasn’t sure how good the track was going to be or if it was going to be passable, but it was, and I could put my car anywhere and it was still good. I can’t say thank you enough to the track crew for giving us some track there after the Sprints and thanks to the fans for sticking around and watching us. We have a great team here and we don’t ever give up and tonight we had a great run. It was a great show for the fans and especially for the fans who only get to see us run a couple times a year. Any win is special but wins like tonight are extra special.”

It definitely wasn’t for a lack of effort from the driver and the crew of the Roberts Racing No. 14W that relegated the Boyertown, Pa., driver to a hard earned second place finish at nights end.

“The car was good, we made some changes after the heat race. It was pretty good in the beginning through the middle and then the top started going away which let Umbenhauer close in on the bottom, so I had to change up my line there a little bit and use the bottom. Jeff’s been on his game down here and his car has been fast. He is one of the fastest and smoothest cars down here and he has a lot more laps at this place than I do for sure.”

After winning heat number three earlier in the night the driver wasn’t very happy with how his Bicknell chassis felt afterwards so Watt and the crew went to work to improve on it for the main-event. Whatever the crew did to the car seemed to work as Watt went out and led most of the first 24 laps before succumbing to Strunk’s assault on the field to garner a well-earned second place finish.

“The car was decent in the heat race but when we came in after the heat the rear had locked up and the motor was flat.  Here it was because the brake caliper was hung up so we had to fix all that before the feature and it seemed to work pretty good after that.”

Watt and fourth place finisher Jared Umbenhauer waged a crowd-pleasing battle for the lead for most of the race ultimately over shadowed by Strunk’s charge to the front and Watt talked about what a good race he had with the young Umbenhauer.

“That was cool, it was clean. He didn’t try to pinch me into the wall and I didn’t try to run him down too low. That was a lot of fun.”

27 Cars signed in for the night’s racing. Brian Papiez, Ron Kline and Ryan Watt won the three heats. No consi was needed as a few cars scratched for the night after the heat races…

A standing room only crowd was on hand for the track’s annual PA Speedweek show which featured NASCAR stars Kyle Larson, Kasey Kahne, Tony Stewart, Christopher Bell and Rico Abreu all competing in the 410 Sprint car portion of the show…

Tough night for weekly Grandview campaigner Chris Esposito. After a good pill drawer which found Esposito scheduled to start on the pole in the first heat. The No. 31 refused to fire as the cars came out to run the heat…

The No. 41 of Meme Desantis never made it past warmups when engine troubles ended their night early…

Weekly Grandview top runners Duane Howard, Mike Gular and Frank Cozze were not in attendance due to Short Track Super Series race at Accord Speedway…

Billy Pauch Jr, Ryan Watt and Brian Papiez were the only outsiders to make the trip…

It was a rough night for last Saturday nights winner Brett Kressley who spun early in the race. Kressley restarted the race but pulled off shortly thereafter ending his night…