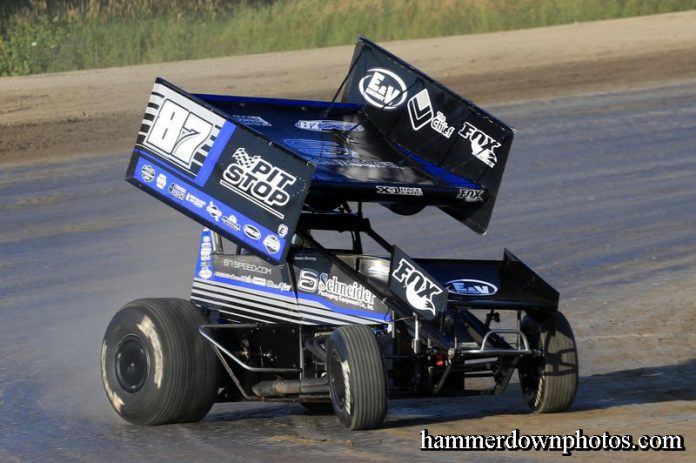 The 2018 edition of the ESS Donath Motor Worx CNY Speedweek is finally here, and well underway at this point. Lots of 360 sprint car competitors have been coming from many parts within, and outside of, the U.S. to join the Empire Super Sprints for this challenging five-race series.

However, not everyone is as familiar as the next race fan with each of the drivers’ names and their racing backgrounds. This five-part featured series will profile five individuals in competition this weekend and provide insight on their history in the sport and where they might be headed next in their racing careers.

The first driver I had the opportunity to talk to was none other than the 2014 CNY Speedweek Champion, “Racin” Jason Barney.


Jason, now 38, began his racing career at the primitive age of five years old, competing in flat track motocross events. His father owned a late model that competed at the local Brewerton and Fulton Speedways, raced by hired drivers in the mid-late 1980s. Just like every other young kid sitting in the bleachers of a dirt track every weekend, Jason’s interest in auto racing was permanently sparked.

He eventually traded in his two-wheeled talents and equipment for an open-wheel quarter midget by the age of seven and began racing at the New York State Fairgrounds with their still-functioning quarter midget club.

By the time he was 10, Jason had been drawn very well into the sport and began competing at national events in his quarter midget. Shortly thereafter, he upgraded to a micro-sprint, and raced that into the early 1990s.

When Jason turned 15, he made his debut in a dirt Modified in 1995, competing in the Sportsman division at the Utica-Rome and Fulton Speedways. It did not take long for him to find major success at this young age, as he captured the 1996 Sportsman track championship at the Fulton Speedway, and joined the DIRTcar Sportsman tour the following season.

In 1998, Jason was presented with an opportunity to dive into big-block modified racing. The North Tech Development ride, formerly driven by Tim Fuller, was vacant, and Jason was the fortunate son to fill the spot.

Unfortunately, the opportunity did not go over as planned. In April of that year, Jason was involved in a serious car accident on his way to the race shop, which took the life of his father and injured he and a friend.

After taking time off to recover from his injuries, Jason returned to the track in July 1998. He was met with very limited success, which he said came down to a lack of preparedness and experience required for the level of competition. The fall of that year would be the last time Jason would drive in big-block competition for the next few years.

Jason stared down a crossroads at the beginning of the 1999 season. He still had spare parts and an engine left over from the remains of his own Sportsman Modified, which he decided to convert into a small-block Modified and race selected shows throughout the year. Once again, things did not work out, as funds ran low rather quickly, and his self-owned small-block team was soon disbanded.

Cue car owner Eric Kingsley. Jason was offered a ride for the 2000 season on Kingsley’s team, where he saw success once again in both small-block and big-block action. He decided to switch teams just three years later, driving for John Wight for three more seasons in a big-block.

“I wish I could go back Modified racing, being a little bit smarter now, a little bit more mature,” Jason said in an interview. “But it was a great experience.”

He was about ready to call it a career after one final year of big-block action in 2005, when he was approached by sprint car owner Jeff Walton for the 2006 season. Three years in action was all it took for Jason to buy out his owner, and he became the sole proprietor of his own sprint car team.

Since 2010, Jason has amassed numerous victories with the ESS, PST and other various circuits across the Northeast.

“I think that I’ve been lucky enough to have the best race team in the Northeast,” Jason said. “I’m proud of it. I’m really proud about what I’ve been able to have and have people around me that have been supportive.”

“The thing I’m most proud of is just building this race team and having a high-caliber race team that’s respected,” Jason said. “I think that’s my biggest accomplishment.”

Jason is also the owner of 87Speed, an aftermarket racing parts and repair company he branded in 2015, specializing in rear-end repair, engine/brake line/fuel line plumbing, suspension repair and building, as well as X-1 Race Cars sales.

It’s worth mentioning that Jason has actually finished runner-up to seven-time ESS Champion Steve Poirier in the points championship three times. In 2013, he was third to Poirier, behind Paul Kinney. But Jason said he has a lot of respect for Steve and all of his accomplishments.

“I think it kind of brought out the best in both of us, as far as the competition, and we both just had great seasons,” Jason said. “We were just consistent.”

As for future plans, Jason said he’s ready for another small bunch of years in full-time ESS competition, hitting 40-50 races per year in the process. Knoxville is also something he’s had on the bucket list throughout his career, and a few top 10 finishes there before retirement would suit him just fine, Jason said.

The Canadian Sprint Car Nationals at Ohsweken Speedway is another 360 crown jewel that Jason would like to capture. He’s been top-five multiple times, and hopes to cash that experience in for a win somewhere in the coming years.

And finally, there is his next Speedweek title. He did not have his greatest run at the championship last season, as he only broke the top five once, when he won on July 1 at Fulton. But a seasoned veteran like himself knows CNY Speedweek is no easy feat.

“A Speedweek title is just as hard, if not harder, to get than an ESS title,” Jason said. “I hold just as much pride in having and getting one of those as an ESS title.