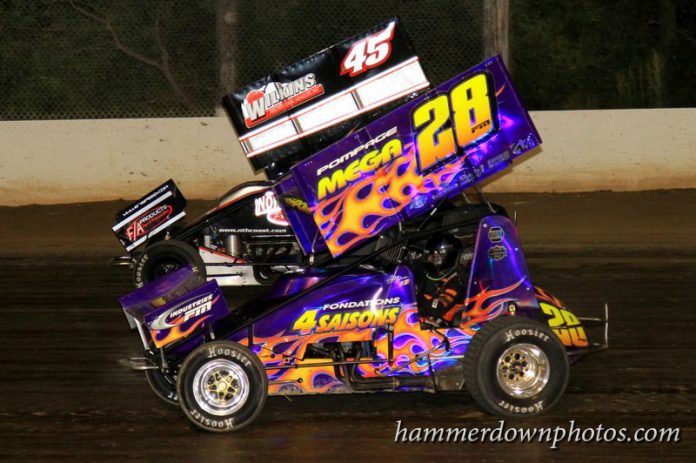 BREWERTON, NY – The third night of Donath MotorWorx Central New York Speedweek saw an epic battle at the front of the field as two former series champions exchanged slide jobs to see who was going to come out on top. Steve Poirier and Chuck Hebing battled throughout the 25-lap A-Main on Friday night at Brewerton Speedway. Eventually it was Poirier, of St. Mathieu de Beloeil, Que., who outlasted Hebing for his record 67th career win.

Poirier and Hebing exchanged the lead no less than five times as they swapped slide jobs looking for the $2,500 top prize. Poirier ran the extreme top of the speedway while Hebing found something through the middle. Poirier ultimately altered his line late just enough to keep Hebing behind him in the NAPA Auto Parts, E & V Energy, Mach 1 Chassis A-Main.

“We haven’t been struggling, but we’ve been in the top five and not winning like in the past,” commented Poirier. “It could not be tougher to win than during Speedweek. When you win one of these it is better. I had fun racing with the Cobra (Hebing) and Jason (Barney) at the front. We race each other clean and try to put on a good show. I have a great respect them. That makes this feel better.”

Barney and Poirier redrew the front row for the start of the race. On the opening circuit Barney dove low with Poirier working high. Barney edged Poirier the line to lead lap one. Poirier was able to take the lead on lap two as the blasted around the cushion.


The top two remained unchanged until lap seven when Brett Wright spun in turn four. At the green flag, eighth starting Chuck Hebing moved his way from third to battle Barney for second. He took the spot on lap 10. He now put his full attention to tracking down Poirier.

On lap 11 Hebing made his move to take the lead from Poirier only to have the race come under caution for a second and final time. Matt Tanner slowed to stop in turn two necessitating the yellow.

The green flag flew once more with Hebing getting the hole shot and Barney also moving by Poirier to take over second. Poirier quickly regrouped getting rolling once more on the top of the speedway. On lap 14 Poirier got the lead back.

Hebing drove back by him on lap 15 off the bottom of turn two only to have Poirier pull a slide job in turns three and four to regain the top spot. Hebing stayed right with him while continuing to work the extreme bottom lane of the speedway.

“On a tight bull ring like this we are all fighting for our small space,” stated Poirier. “When I saw Cobra (Hebing) I thought I was done. I was searching for a lane. I didn’t know where to go. I was pretty good early on the outside of three and four but then it started going away. He was good in the middle so I knew I needed to find something different.”

As the race reached the final third, traffic now factored into the race forcing Poirier to not only contend with Hebing but also slower cars at the back of the pack. Hebing continued to work over Poirier for the lead with a late charging Larry Wight entering the fray as well.

Poirier made all the right moves late to find himself in victory lane at the end for his first Brewerton Speedway triumph since August of 2011.

Hebing, coming off his win at Land of Legends Raceway the previous night, ended up coming to the checkers in the second position. The Ontario, N.Y., driver was all smiles afterwards even though he didn’t get the win.

“Steve and I have been racing a long time together and we really enjoy it, but I enjoy it more when I beat him,” joked Hebing. “He said I showed him the middle of the race track so I went down and chose the bottom. I should have stuck to what I was doing. That cost me the win there but it was good race.”

Wight, a Modified regular as the speedway, was in the mix late but came up short finishing third after starting in 11th position. Wight made up much off his ground as Poirier and Hebing tried to get through traffic. He worked the extreme low lane on the race track.

“I wish I had another 10 laps to watch them struggle in traffic,” stated Wight. “I think I could have maybe got them while they were in lapped traffic. I kept hoping for a lapped car to slide up so I could drive underneath both of them.”

A field of 40 sprints filled the pits for Night #3 of Speedweek,