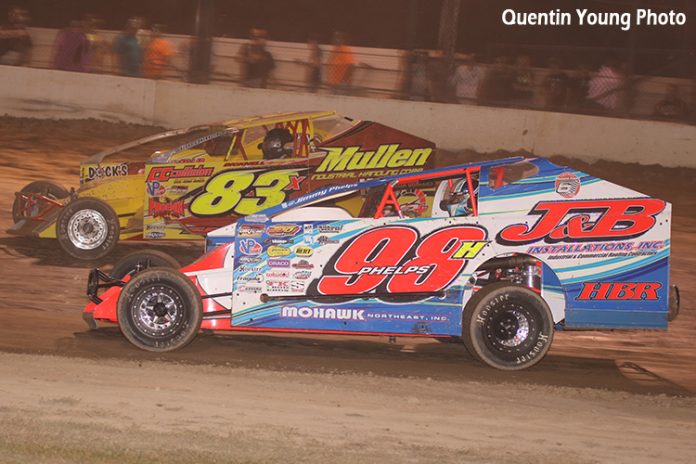 BREWERTON, NY – Although Jimmy Phelps is the current Modified point leader at the Brewerton Speedway, the Baldwinsville, N.Y., driver had yet to score a win.  That changed on Friday night as Phelps tracked down Tim Kerr late to pick up his first checkered of the season at ‘The D-Shaped Dirt Demon.’

Kerr took control at the beginning of the 35-lap Modified main, holding a small lead over Willy Decker early in the event. With six laps in, Pat Ward found enough bite up high to slide around Decker for second, but Decker remained locked to Ward’s tail. While the top three were under a blanket, all eyes were on 11th-starting Jimmy Phelps and his charge through the field. By lap 13, Phelps had already cracked the top five and was not prepared to settle in there. Soon after, Phelps split the middle of teammate Max McLaughlin and Decker to claim third.

Slowly but surely, Phelps reeled in the leading duo of Ward and Kerr. On lap 24, Phelps squared off turn four and got a massive run down the bottom of the frontstretch, enough to take second from Ward. However, Phelps’ massive momentum entering the turn caused him to slide up in turn one, giving Ward a chance to cross over. A lap later, Jimmy Phelps secured the runner up spot and went after Kerr.

With Kerr running the middle, Phelps’ preferred bottom lane was free real estate. On lap 28, Phelps got a big bite exiting turn two to pull alongside Kerr, then completed the pass through turns three and four. With a little help of slower traffic, Kerr was able to stay close for a few moments, but it wasn’t enough to stop Jimmy Phelps from scoring his first Brewerton and second overall win of 2018. Tim Kerr held onto second, while Ronnie Davis III got by Pat Ward for third, and Tom Sears Jr. completed the top five.


“This car was on a rail, and what a racetrack,” Phelps said. “It was smooth as glass, and you could move all over the place. It seemed like in the beginning of the year you had to be on the bottom or on the top depending on the night. We’ve been gaining, working on our program and working on our car, and it’s starting to show.”

Throughout the race, Jimmy Phelps made a number of aggressive moves to pick up a spot or three, making passes in a corner that many conservative drivers would have taken a lap to complete.

“It’s Brewerton,” noted Phelps. “Last week I thought we had a car that could win the race, but sometimes you wait too long, and last week we ended up sixth. Sometimes you just have to take a chance, and tonight we came out alright.”

Brewerton hosted the “hump day” of Empire Super Sprint CNY Speedweek, and it was Steve Poirier launching out in front of defending ESS champion Jason Barney at the start of the 25-lap main. Poirier and Barney fought the entirety of the opening run, ending on lap seven as Brett Wright spun. On the restart, Chuck Hebing got around Barney up top for second and immediately went after leader Poirier. Matt Tanner spun with 11 circuits complete, allowing Hebing to line up alongside Poirier.

Entering turn three on the restart, Hebing shot a barely successful slide job on Poirier to snatch away the lead. The move allowed Barney to retake second and almost take the lead, but Hebing held him off. Despite the lost momentum, Poirier wasn’t done yet, as he quickly stole second back from Barney. On lap 15, Poirier shot a slider of his own to regain the lead.

The leaders quickly entered lapped traffic, with Poirier and Hebing slicing through slower cars. The traffic allowed third place Larry Wight to close in on the top two during the final laps, but neither Wight or Hebing could mount a charge on the leader. When the checkered fell, it was Steve Poirier claiming victory over Chuck Hebing, Larry Wight, Jason Barney, and Danny Varin.

“When I saw The Cobra (Hebing) coming on the inside of me, I thought I was done,” said Poirier. “I was searching for a lane, but didn’t know exactly where to go. I was pretty good on the outside of turns three and four early, but it faded. Then, I saw Hebing rolling the middle and I knew I had to at least find something different. I just kept digging.”

In the first Sportsman event, Tony Finch led wire-to-wire, but didn’t have it easy for much of the race. Finch was stalked by Will Shields for the majority of the 25 laps, but ultimately couldn’t get by. The second feature was very similar, with Brent Joy holding off constant pressure from Kevin Root to grab the checkered flag.