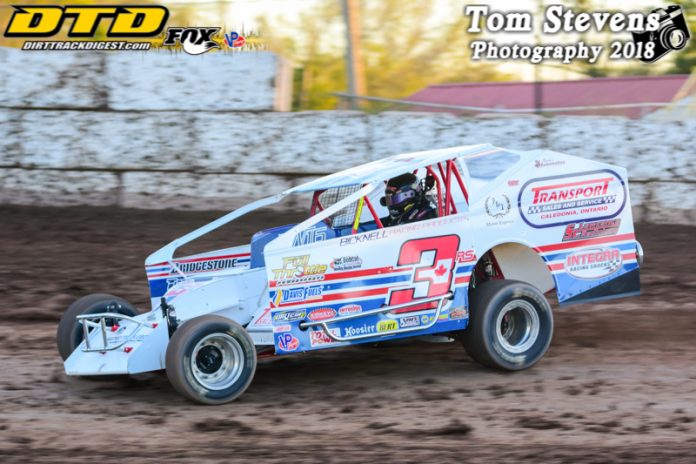 RANSOMVILLE, NY – “The Ransomville Renegade” Ryan Susice scored his first win of the season in the Krown Undercoating Modifieds as Live Edge Brewery and Asset Consulting Experts presented the racing action at the Ransomville Speedway. The three-time and defending track champion drove the Slack Racing #3RS to his first win of the year. Derek Wagner from Middleport, NY won his second Investors Service Sportsman feature of the season. “The Huckster” Cory Sawyer from South Central Niagara Falls, NY won his second straight feature event in the make-up feature for the KiPo Chevrolet Street Stocks, while Ransomville, NY’s “Showtime” Jaren Israel won his first feature of the season in the nightcap Street Stock feature. Chad Desso from Wilson, NY scored his second win of the season in the Gippster’s Collision 4 Bangers. Ken Washburn from Ransomville, NY won the makeup main event for the Stevenson’s Hardware Novice Sportsman while Appleton, NY’s Cody “The Wolfman” Wolfe picked up the regularly scheduled feature for his third win of the year.

Three-time and defending Krown Undercoating 358 Modified track champion Ryan Susice and Allan Wills brought the mighty Modifieds to the green flag for their 30-lap feature with “The Ransomville Renegade” showing the way. Allan Wills got loose in the middle of turns one and two to spin on lap one to bring out the races first caution. The restart would see Susice pull away from Greg Martin as Tommy Flannigan challenged Martin for second with Chad Brachmann, Pete Bicknell, and Erick Rudolph racing inside the top six. Brachmann would take third away from Martin as Bicknell and Rudolph went three-wide with Martin to move into the top five. Rudolph would take third away from Brachmann after CB3 hopped the cushion exiting turn four on lap nine. Susice and Flannigan would pull away from Rudolph as the leaders hit lap traffic at the halfway point. Rudolph would catch the lead duo while the leaders were in lap traffic with 11 laps remaining to make it a three-car battle for the lead in the closing laps. Rudolph would take second away from Flannigan late in the going and would quickly reel in Susice. The two Ransomville natives would battle for the final two laps with Susice edging out Rudolph to score the win, his first of the 2018 season. Flannigan, Brachmann, and Bicknell would complete the top five.

Qualifying heat race winners Noah Walker and Derek Wagner shared the front row in the 25-lap feature for the Investors Service Sportsman with Wagner leading the opening circuit. With Wagner up front, Chris Burek would quickly take over second place with Kevin Wills, Kyle Wendt, and Justin McKay racing inside the top five early on. The top three would pull away from the battle for fourth place between Kyle Wendt and Justin McKay. McKay would have issues in turn four to bring out the races first caution on lap 13. The mid-race restart would see Wagner and Burek battle for the lead as Kevin Wills and Richie Vinson looked on in third and fourth respectively. The top two of Wagner and Burek would pull away from the rest of the field. Wagner would go on to score the win, his second of the season to make it the first repeat winner in the division.

Joey and Randy Zimmerman brought the KiPo Chevrolet Street Stocks to the green flag for their 20-lap make-up feature event with Joey Zimmerman showing the way as Chris Dziomba and Pat Dell battled with Randy Zimmerman for second place. Dziomba would waste no time getting to the rear bumper of Joey Zimmerman for the lead as Cory Sawyer passed Dell to move into third place. Sawyer and Dziomba would battle for second place. Dziomba would take the lead away on lap eight after battling hard with Zimmerman for the lead. Joey Zimmerman would then get loose exiting turn four and spun to bring out the races first caution. After the restart, Dziomba and Cory Sawyer would battle for several laps for the lead as Sawyer would take the lead entering turn three and would clear Dziomba on lap 13. Sawyer would open- up the lead over the rest of the field over the second half of the race. Jim Coble spun in turn two to bring out the caution with one lap remaining. Sawyer would lead the final lap to score his second straight feature win.

The second Street Stock feature was brought to the green flag by two past track champions in “Showtime” Jaren Israel and Brandon Sherwood with Israel showing the way with Sherwood, Pat Dell, Cory Sawyer, Ken Camidge, and Pete Stefanski raced in the top six. Sawyer would battle with Sherwood for second place with “The Huckster” taking second away with Pete Stefanski taking fourth away from Pat Dell. Israel would pull away from the field as Stefanski would battle Sherwood for third place. Stefanski would pass Sherwood on lap seven to move onto the podium and would start his chase of the lead duo, Israel, and Sawyer. The caution would come out on lap 11 as Dan Korpanty spun, in turn, one right in front of the race leader.  The restart would see Stefanski take second away from Sawyer and would go after Israel. Stefanski and Israel would battle with Stefanski taking the lead on lap 13. Over the final seven laps, Stefanski and Israel would continue their battle with “Showtime” getting around Stefanski on the outside exiting turn four on the last lap to steal the win, his first of the 2018 season.


Brandon Close and Steve Matson led the Gippsters Collision 4 Bangers to the green flag for their main event with Matson showing the way. Chad Desso would take the lead away on lap two and would open- up his lead over the rest of the field.  After a lap five restart, Desso, Matson and “Mr. Peanut” Ryan Plante raced in the top three. Desso would pull away from the field to score his second victory of the season.

Ken Washburn and Orval Harris were on the front row for the 15-lap make-up feature event for the Stevenson’s Hardware Novice Sportsman with Washburn showing the way early on. Bubby Pawlak would challenge Orval Harris for the second position, but Harris would keep the runner-up spot in the races’ early stage. Pawlak would take second away on lap eight after the leaders had issues with a backmarker. Washburn would lead all 15 laps to earn his first win of the season.

The second Novice Sportsman feature was brought to the line by Tyler Vinson and David Fingerlow with Fingerlow taking the lead with Cody Wolfe taking second place away from Vinson. Going into turn one to start the second lap, Vinson bumped Wolfe and Fingerlow to make both Wolfe and Fingerlow spin to bring out the caution. The caution would put Bubby Pawlak into the lead with Ken Washburn racing in second place. Pawlak would stretch his lead over the rest of the field as Cody Wolfe worked his way back through the field. The caution would come back out for Matt Foster who spun in turn four on lap seven. Pawlak would continue to lead until Cody Wolfe made a last lap pass and Wolfe would hold off Pawlak to score the win, his third of the season.

NEWS AND NOTES:  Due to track conditions, the kid’s rides that were scheduled for tonight was postponed until August 24. Kids that had wristbands for the kid’s rides were to go to the concession stand for their free freeze pops. Cody Wolfe’s Novice Sportsman win came in his first race with a brand-new motor.

Next Friday night will be the second annual John Susice Memorial for the Street Stocks as Niagara Hardwood, A-1 Landcare, Sunset Bar and Grill, and WGR 550 will present the full card of racing plus Kids Power Wheel Races! It will also be Halloween Night at the Big R with Trick-Or-Treating and more activities will take place. Pit gates open at 5 pm, with grandstands opening at 6 pm, and the first green flag of the night set to wave at 7:15 pm.