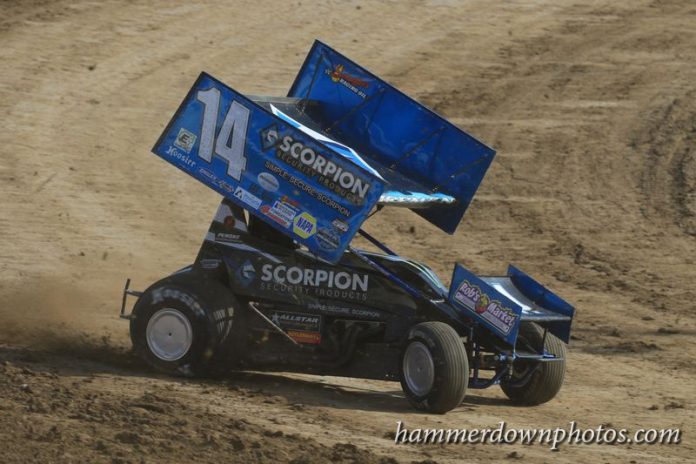 In the second installment of the ESS CNY Speedweek Featured Driver Series, I had the pleasure of chatting with former wingless sprint car driver, Coleman Gulick.


“The Iceman,” now 24, began his racing career at the very young age of 4 in a microd around his hometown of Binghamton. This was where he found the “Iceman” nickname; a spectator told his father he was an “iceman” after he would get done racing and go off playing around the track with his friends. In other words, nothing seemed to rattle Coleman, as if he had ice in his veins…

He soon jumped into micro-sprints and then full-size sprint cars at age 12, racing at Clinton County Motor Speedway in Pennsylvania. Coleman said that because of his age, this was the only track he was permitted to compete at. The weekly sprint car class at the time raced 410 cubic inch engines, Coleman raced with a 360.


His inspiration and initial exposure to the sport came from his elders: Coleman’s father raced a pro stock and took on ownership of a dirt modified until 2003, when Coleman got heavily into sprint cars. Likewise, his grandfather raced modifieds as well; many, many years before he stepped foot in a racecar.

When Coleman turned 14, he moved out to Indianapolis to join the wingless sprint car ranks and cut his teeth against some of the world’s current top drivers, like Kyle Larson, Christopher Bell and Rico Abreu. He found abundant success in his time racing weekly at tracks like Kokomo and Lincoln Park Speedways, winning both the Vince Osman Memorial and King of Non-wing races in back-to-back years at their respective tracks.

Coleman was also named USAC Sprint Car Rookie of the Year in 2011.

After five years in wingless competition, Coleman decided it was time for a change. He took three years off from racing to explore his future life plans and long-term goals.

“I was heading down the wrong road and had to get back on the right one to keep going and do what I love to do,” Coleman said in an interview. “I think everybody in life has those issues. I don’t feel too bad about it, I just keep plugging away every day.”

In that time, he moved back to New York and shortly after, returned to the track with the wing on. Coleman made his ESS debut last season, winning once at Outlaw Speedway and again four races later at Autodrome Granby.

“ESS is one of the hardest 360 sprint car racing you can get,” Coleman said. “You’ve got to be consistent. These guys, if you make a mistake, somebody’s going to be there to capitalize on it.”

Truth be told, Coleman’s heart is still with the wing off his sprint car. But for now, he said it will be on most of the time, continuing to run with the ESS tour regularly. He also wants to explore 410-winged racing with the PA Posse at some point, as well as making periodic voyages back to Indiana to compete in non-wing shows.

One thing that helps his nickname stick is his attitude towards competition at this level. Sprint car racing has never been an inexpensive sport, and it can be both financially and mentally draining to be tearing up equipment, and emotions, every weekend. Coleman said he puts that all to the side and just tries to make these years enjoyable experiences.

“A lot of people make racing miserable because they get so high with the highs and so low with the lows, they can’t find a happy medium,” Coleman said. “We’re just trying to have fun and take it day by day.”

Outside of the racetrack, Coleman also owns his own apparel brand, Nut Up And Out Ball ‘Em, also known as NUAOBE. Check out their website for all of their exclusive merch at www.nuaobe.com.