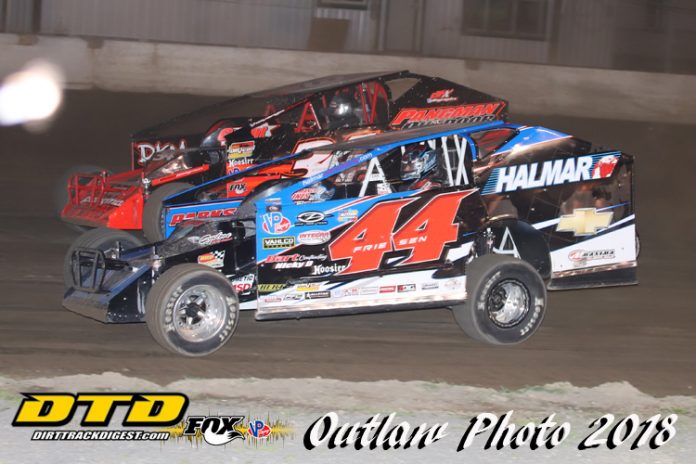 FONDA, NY – Saturday evening at the Fonda Speedway was a special night of racing sponsored by Andy’s Speed Shop. All regular divisions were in action with the exciting racing program completed by 10:00 p.m. followed by a fireworks display that was second to none which was presented by the Village of Fonda and the Fonda Speedway.

The $3,500 to win 50-lap feature for the modifieds was won by Camping World Truck Series driver Stewart Friesen from Sprakers, NY in the Halmar sponsored #44 “Cyclone” car. But Friesen will be the first to tell you that Fonda Speedway is home to him, a place he calls “special” every time he gets a win there, and a track that has a “history to it, a history that he understands and is proud to be a part of.

“Winning here is special and I love it here at Fonda,” Friesen said in the pit area after the win. “It took time for me to figure the track out, it’s not an easy place to win at, every win here at Fonda is hard to get.”

Before the racing program began many drivers from the different divisions at the Fonda Speedway took place in the Village of Fonda After the Fourth Celebration which was being held at the Village of Fonda Recreation Park on Saturday afternoon. The race cars paraded through the village before coming back to the track to compete in their racing events for the evening.

At the drop of Joe Kriss’ green flag to start the 50-lap modified feature event, outside pole position starter Pep Corradi was the early race leader with fourth place starter Craig Hanson right behind in second. Fifth place starter Jimmy Davis took the third position away from Kenny Sparks on lap three with 10th place starter and defending track champion Tim Fuller also getting by Sparks for the fourth spot.

Hanson was pressuring the leader on lap eight at the same time that Fuller was getting by Davis for the third position and 15th place starter Stewart Friesen made his move into the top five. On lap 10, Hanson was the new race leader after getting by Corradi at the line to complete the lap with Fuller also making his way by Corradi for the second position.

By the time lap 13 was scored, Friesen got by both Davis and Corradi for the third position with 14th place starter Bobby Varin now in the fourth position. Three laps later the top three of Hanson, Fuller, and Friesen were together on track battling for the lead in lap traffic. Friesen made his way past Fuller for the second position on lap 20 with Hanson running the high groove and Friesen running low.

At the line to complete lap 23, Friesen got by Hanson for the race lead on the inside groove and then once he got the lead moved to the outside of the speedway and stretched out his advantage over the second place car. Fuller and Varin both got by Hanson for the second and third positions by the time the yellow came out on lap 32. On the parade laps leading up to the restart, Friesen was at first going to restart on the outside but then changed his mind and took the inside row for the restart, a move that proved to be successful.

“At first I thought that I could fire off the top but I knew that the 19 car (Fuller) was fast so I decided to go to the bottom and get the bite to retain the lead and then I moved back to the top of the track right afterwards,” Friesen said.

“We were trying some new things with the rear end geometry during our heat race, which has become a very important factor in the race car as of late,” Friesen said. “We were just trying to keep up with everything and looking for grip. But for the feature we went back to our old setup and it worked out well for us.”

Mike Jackson and Dan Santabarbara started on the front row in the 25-lap sportsman feature with Jackson taking the early race lead. An early yellow on lap one for Griffen Mansmith slowed the field but on the restart fifth place starter Aaron Burton and eighth place starter Ray Zemken were the new third and fourth place cars behind Jackson and Santabarbara.

Coming out of turn four to complete lap seven, Jackson got out of shape and almost spun out with Santabarbara taking the lead at that point while Jackson straightened his car out and continued on in the second position. Burton and Zemken both got by Jackson for the second and third positions on lap 12 with Santabarbara now out to a straightaway advantage.

The final yellow flag flew with 10 laps to go in the event for point leader Nick Scavia who had a great run going but came in contact with one of the implement tires in the turns causing damage to his car while he was running in the top 10. Scavia was done for the evening at that point. On the restart, Santabarbara maintained the lead with sixth place starter Cody Clark now the new second place car but that only lasted one lap as Burton regained the second position on the next lap.

With five laps to go, Santabarbara held a straightaway advantage which he kept until the drop of the checkered flag to complete the race with Burton, Zemken, Clark, and 10th place starter Mark Mortensen completing the top five at the completion of the race.

“I really don’t know,” a very excited Santabarbara said in victory lane. “I’ve been coming here to Fonda since I was three years old from Rotterdam, NY where a lot of different drivers who have won here have called their hometown. To be on that list with them now, I don’t even care what happens the rest of my career.”

Luke Horning and Jason Morrison started the 20-lap pro stock feature on the front row with Horning taking the early lead. A caution on lap one slowed the field and on the restart Morrison took the lead briefly until turn three when Horning was able to retake the lead. Ivan Joslin was the new third place car on lap three after starting fifth with the caution out again on lap three for Josh Coonradt who pitted and returned to the rear of the field for the restart.

Morrison took the lead for a brief time again on the restart until Horning got up to speed by the time the cars got to the backstretch and was the race leader again. Joslin got by Morrison for the second position on lap five. At the halfway point in the event Horning, Joslin, sixth place starter Jim Normoyle, Morrison, and eighth place starter Chuck Dumblewski completed the top five and with five laps to go Horning and Joslin made it a two car breakaway for the win.

Joslin was never able to get close to Horning who went on to his first win of the season and the 13th of his career in the division in the Classic Muscle Parts #2H followed in the top five by Joslin, Normoyle, Dumblewski, and seventh place starter AJ Walters.

“I don’t know what took us so long to get here (to victory lane), maybe a ploy to get new sponsors for some new tires,” the driver known as “Cousin” Luke said jokingly in victory lane. “On that restart when I got close to the pace car I was just trying to keep it wound up so that Jason (Morrison) couldn’t get a jump on me. Once I cleared him I moved back up to the top and held it to the floor the rest of the race and anyone who was going to try to get by me on the inside was really going to have to work for it.”

The 12-lap street stock feature began with Steven Young as the race leader but at the completion of lap one it was fourth place starter Rob VanAernam who held the race lead. With two laps to go in the event it looked as though VanAernam was on his way to another win when he slowed in turn three and drove his car into the pit area.

From that point on it was a two car, side by side battle for the win between Jason Samrov who inherited the lead when VanAernam dropped out of the event and Michael Arnold. Samrov and Arnold were side by side for the final two laps, leaning and rubbing on each other but at the checkered flag it was Samrov taking the win, his third of the season and the sixth of his career in the division over Arnold, Steven Young, Cliff Haslun, Kenny Hollenback, VanAernam, Chase Aussicker, and defending track champion Johnny Young.

Derrick McGrew Jr. led all but the first lap in the $250 to win limited sportsman feature event on his way to win number five of the season over Travis Billington, Michael McCallion, Steve Wagoner, Kadon Hohensheldt, ill Port, Cory White, and Dylan Eldred.

Next Saturday, July 14 at the “Track of Champions Fonda Speedway will be Palmers Service Center Night with a regular show in all divisions along with Kiddie Rides! Starting time will be 7:00 p.m.