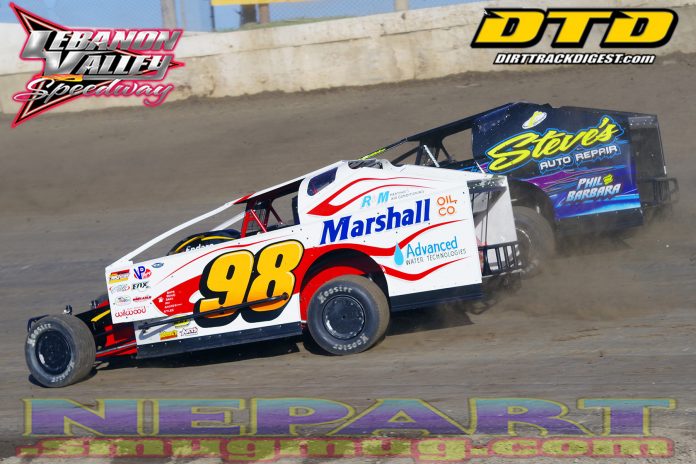 WEST LEBANON, NY – The heat wave finally broke on Thursday afternoon. Despite that, there was plenty of hot action to be had Saturday night at Lebanon Valley.

Rob Pitcher debuted a new chassis on Saturday night, paired with an older engine. The combination seemed potent in his heat and continued to be potent from pole in the feature. Mike Keeler, back in his own equipment, was alongside and gave chase.

Pitcher was able to open up a small gap on Keeler while the two drivers drove away from the rest of the pack. Meanwhile, Kenny Tremont Jr. and Brett Hearn fought their way up through the pack.

Eddie Marshall, who started sixth, was very quick once again. The Connecticut native quickly moved up a couple of spots, then ran down Keeler for second on lap 11. From there, Marshall slowly ran down Pitcher for the lead while opening a huge gap on Keeler.

On lap 21, Marshall put the moves on Pitcher to take the lead. At the same time Marshall took the lead, Hearn suddenly slowed with a mechanical issue on the frontstretch, bringing a number of fans to their feet. Hearn would drop out of the race and be credited with a 19th-place finish.


Marshall pulled away from there to take his second win of the year. The win was Marshall’s 30th career Valley Big Block win, putting him 10th all-time. That said, it wasn’t exactly a perfect night for Marshall.

“I did think I missed [the setup] a little bit at first,” Marshall said. “It took…a half a dozen laps to get going. Once we got settled in, the car was really good and handled well. We had a fast horse, but Rob [Pitcher] was really running good. Wasn’t sure I was going to get there, but we’re quite pleased with the win.”

Pitcher was second, followed by Kyle Sheldon. Ronnie Johnson passed Keeler for fourth on the final lap and created a chain reaction. Keeler and Tremont had contact and spun across the line. No one was hurt and Tremont described the incident afterwards as a “racing deal.” In the incident, Johnson claimed fourth while Keith Flach was fifth. Keeler and Tremont were sixth and seventh.

In the Small Block Modifieds, Kim LaVoy started from the pole and led early in her No. 3. A couple of cautions, first for Steve Hough blowing a tire, then Jason Herrington stalling in turn 2, kept her lead in check.

Andy Bachetti quickly moved himself into second and made his presence known to LaVoy. Despite strict pressure from the “Wild Child,” LaVoy was able to hold off the charge.

Then, Tremont entered the scene. Starting 16th, Tremont methodically made his way up the order, moving into third by lap 9. He chased down LaVoy and Bachetti with good form. Once there, he battled his way past Bachetti. Just a couple of laps later, Tremont was able to get past LaVoy for the lead.

Once out front, Tremont was gone. The Sand Lake Slingshot pulled away to take his third win of the year. Bachetti was second, followed by Brett Haas. LaVoy held on for fourth, while J.R. Heffner was fifth.

In Sportsman, Scott McCoy started from the pole and had the best feature of his career at Lebanon Valley. McCoy kept his No. 187 Bicknell up front for the first 12 laps of the feature.

At that point, East Greenbush’s Cody Ochs entered the picture. The veteran was able to put the moves on McCoy and take away the lead. A late caution for a crash involving Peter Carlotto, Joseph Coppola and Mike Gramolini put the strongest Sportsman teams right on Ochs’ bumper bar, but he held on to take his first career Sportsman win at Lebanon Valley.

Pro Stock saw Frank Twing start from the pole and lead early. However, the event was roughly early on. First, Mark Dupuis spun in turn 4 to bring out the yellow. On the restart, heck broke loose in turn 2. Nine cars piled into a crash that blocked the track and brought out the red flag. Notables involved in the crash included points leader Jon Routhier and Rob Yetman.

Things calmed down after the big wreck. With a number of drivers eliminated, Jason Meltz rose to the front. Just before halfway, Meltz was able to run down Twing and take the lead.

From there, Meltz was able to hold onto a small advantage and take his first win of the season. The win also allowed him to regain the points lead.