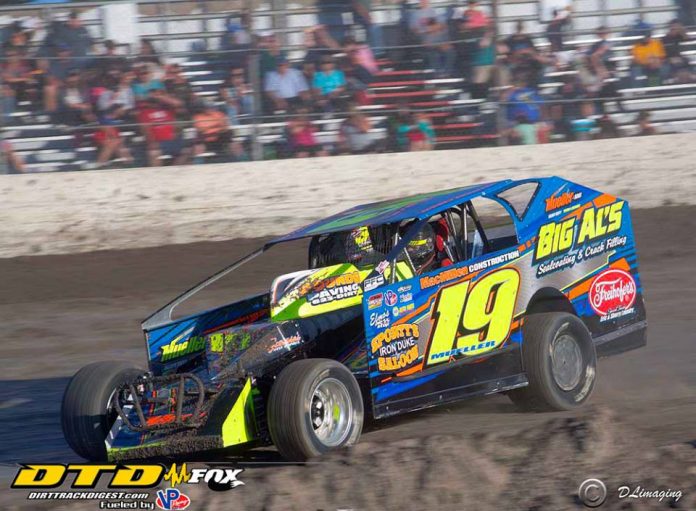 Mueller quickly worked to the top of the racetrack and made the pass for the win on the outside on lap-12. A late race restart pinned Steve Bernier along the inside of Mueller, but the Olmsteadville native held strong and pulled away to a comfortable victory.

Bernier held on for second, while Chris Raabe rallied from an early spin to pick up the third spot. Todd Stone and Dany Gagné rounded out the top five.

“I’m glad we started coming back up to Airborne,” Mueller said. “I really think we are getting our program where we want it to be.”

Devin Willis was well on his way to his first career Poirier’s True Value Sportsman Modified feature victory, however, Willis ran out of fuel while leading on lap-21. Bucko Branham would inherit the lead.


Branham elected to restart from the outside of the track while Jason McClatchie would go from the inside. Branham aced the restart and got out in front, but McClatchie wouldn’t go away. He ran along the back of Branham, but wasn’t strong enough to get around.

“I feel like we had a second place car tonight,”Branham said. “It’s definitely good to get the monkey off our back after a couple of tough weeks.”

Josh LaPorte collected his third win of the season in the Mini-Mod division, while Shawn Walker scored his fifth win of the year in the Strictly Stock division.

In addition to the racing action, Airborne inducted its first annual Hall of Fame class. Maurice Broderick, Jackie Peterson, Charlie Trombley, Dick Nephew and Bob Bruno were the five inductees for 2018. The Airborne Park Speedway Hall of Fame is located at the Champlain Valley Transportation Museum in Plattsburgh.

Friends and family of all five inductees were on hand for the ceremony. Included were the classic racecars of Nephew, Bruno and Trombley prepared by Jody Manor, Gary Harris, Gary Nephew and John Rock.

Airborne resumes its racing action next weekend for Make-a-Wish and kids’ night. Post time will be at 7 p.m. For more information and to stay up to date, visit airborneparkspeedway.com.