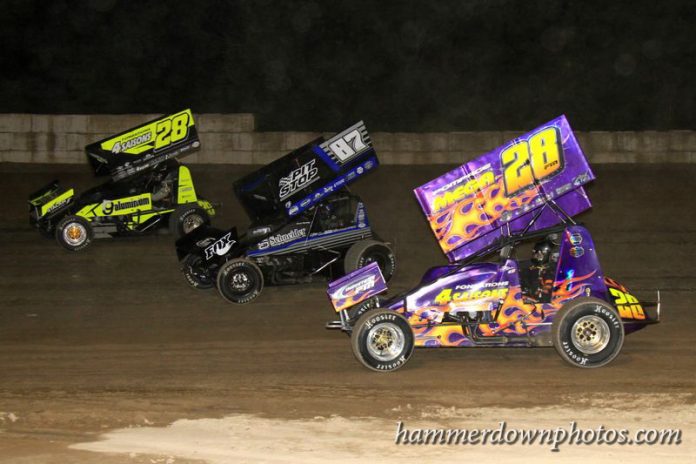 FULTON, NY – On Saturday night at the Fulton Speedway it was the Poirier name again in victory lane. This time it was Jordan Poirier stealing the spotlight as he scored his first Lucas Oil Empire Super Sprint win in the United States. The win came on night four of Donath MotorWorx Central New York Speedweek at the Fulton Speedway.

Poirer had an intense battle with front row starter Danny Varin as well as Steve Poirier. The three were close the entire distance with Jordan coming out on top to take the $2,500 victory. Jordan road the high-side to win Saturday night’s A-Main presented by both NAPA Auto Parts as well as Mach 1 Chassis.

“What a feeling,” exclaimed Jordan. “To beat Varin and Steve. The track was good for me. There was a little cushion for me to put my right rear on. I can’t thank my crew enough. After last night we were quite disappointed about the finish. Tonight it can’t be better.”

Varin raced out to the lead to open the feature with the pair of Poiriers and Jason Barney in tow behind him. Varin worked low while Jordan planted his No. 28 up on the high-side of the speedway. He stayed there which allowed him stay close to Varin.

Traffic was an issue for the first time on lap seven with many of them in Varin’s lane on the bottom. That opened the door for Jordan to make a move. He stayed just off the rear of Varin’s waiting for his opportunity to pounce.


His opportunity came just before halfway. Jordan took the lead for the first time on lap 12 before Varin regained the top spot a lap later. Jordan stayed on the top while Varin never gave up his bottom lane as they wrestled for the lead in traffic. Varin kept Jordan at bay.

As they came to the line to complete lap 16 Varin edged just in front of Jordan at the line as they raced off of turn four. Jordan got a huge run off the top of turn two on the next lap to take the lead while putting some distance between himself and Varin. At that point Varin began searching.

“I was trying hard to run the outside and every lapped car was running the inside,” stated Jordan. “It made my job easier to pass him. It was tough to pass Varin, but the race was clean. It is an awesome feeling to win at Speedweek with such a good car count.”

Over the final five laps Jordan outraced Varin while Steve closed in. Steve nearly got to Varin for the second position but ran out of time. Jordan came across the line for the win, the second of his career with his other coming at the Cornwall Motor Speedway last year.

Varin, a former Fulton winner, was able to hold off Steve for the second position after starting on the pole. Varin didn’t give up on the bottom lane until it was too late.

“He knew the fast way there,” commented Varin about Jordan. “He was able to run up there the first lap and feel it out. I was leading and little too comfortable to venture out. It was a great effort by these guys. The car was really good. It’s a hell of job by this team. It’s been a long week.”

Steve, who holds an 18 point lead in the chase for his third Speedweek point title, ended up third. He was consistent one night after winning the previous night’s main-event at Brewerton.

“My strategy at first was to use the moisture on the bottom hoping it would come in a little bit,” mentioned Steve. “I tried to make a move on the outside later, then Jordan passed me on the outside. He was doing pretty good. I tried that lane but I was not catching him. Danny was searching to try and find a way around him. I was hoping to have some luck in traffic to catch them.”

A field of 36 sprints were in the pits on night #4 of the Speedweek.