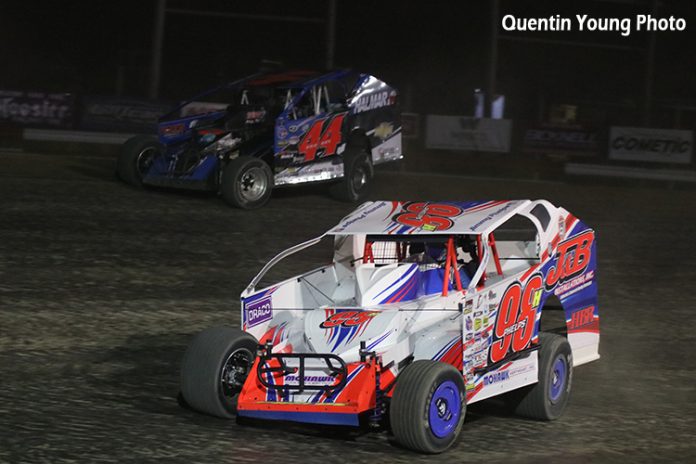 VERNON, NY – Jimmy Phelps claimed victory in the Super DIRTcar Series Freedom Fighter 100, leading all but one lap in the star-studded event. Phelps held off heavy pressure from Stewart Friesen and Danny Johnson to take the checkered for his second win of the weekend and first Super DIRTcar Series triumph since 2016.

“I have to thank that young lady who pulled the number one pill, because that meant a lot tonight,” Phelps stated. “What a car, this thing was on rails. I got a whole list of people to thank, it feels good.”

Jimmy Phelps, fresh off a win his last time out at Brewerton, took control of the field in the opening stages of the Freedom Fighter 100. Phelps was hounded early by Thursday’s Liberty 100 winner Danny Johnson, who remained within a handful of carlengths the opening run. Andrew Ferguson found himself in the turn two inside wall to draw the first yellow of the event on lap 12, and the field lined up to re-fire.

Stewart Friesen got a massive launch, rocketing from sixth to third on the restart. Friesen then went to work on Danny Johnson for second, with Friesen being scored runner up on lap 20. However, Johnson fought back as the pair swapped spots a number of times. Out front, Phelps continued to chug along the bottom and make good time. The field was brought back to Phelps once more on lap 28 as Billy Whittaker went over the turn two banking.


Friesen held close to Phelps when the field resumed racing speed, with Friesen rolling the top and Phelps down low. Friesen saw his chance when the leaders caught lapped traffic, where the first lapped cars were all running down low. Friesen drew even with Phelps on lap 42, and was scored the leader at the line on lap 44, but the frontrunners cleared traffic and Phelps returned to the top spot. Phelps then extended his advantage over the rest of the pack before the next caution with 48 circuits completed.

On the restart, Friesen made another charge at Jimmy Phelps for the lead, but couldn’t do it. After many laps of running the far top, Friesen’s line got the best of him, as the NASCAR regular slid off the top of turn three on lap 71 and lost a bunch of time. The off-track adventure kicked Friesen back to fourth, as Danny Johnson and Billy Dunn slid into second and third. This really helped Johnson, as “The Doctor” was picking up speed in the late stages.

With 20 laps to go, Phelps had a solid half straightaway lead over Johnson. As comfortable as Phelps’ advantage was, there were no lapped cars between the two leaders, but a whole lot in front of Phelps. A caution on lap 82 for Rich Scagliotta saved Phelps from traffic, but put Johnson right on his tail. When racing resumed, Jimmy Phelps got a good launch over Danny Johnson.

Just as Phelps seemed prepared to walk away to his first Super DIRTcar Series win since Fonda in 2016, Bobby Varin spun to draw another yellow on lap 90. On this final restart, Danny Johnson stayed closer than before, within striking distance of Phelps. Behind the leaders, Phelps’ teammate Max Mclaughlin had charged from the back of the pack into the top five, clawing past Dunn for fourth. Up front, Johnson had closed to two car lengths as the field prepared to take the white flag.

“Cautions helped at times because we were definitely committed to the bottom,” noted Phelps. “I was able to roll around a couple of guys in the middle of one and two, but never ventured out there in three and four, fortunately we didn’t have to. We’ve been on a little bit of a dry spell in the win column with the Super DIRTcar Series, so it feels good to get back on track here.”

Johnson was close, but not close enough to make a move for the win. Jimmy Phelps crossed the finish line first to win the Freedom Fighter 100 over Danny Johnson, Erick Rudolph, Max McLaughlin, and Matt Sheppard.

The Empire Super Sprints returned to the track for the fifth and final night of CNY Speedweek at Utica-Rome for a 25-lap main. The fast family of Steve and Jordan Poirier led the field to the green, with Steve getting the best of his son in the early going. Things didn’t stay good for Steve, as the elder Poirier slowed from the lead on lap two to draw the race’s first caution.

12th-starter Matt Tanner got a rocket restart and was looking for the lead on lap 3 before Mark Smith stopped for a yellow. Once race pace resumed, Tanner went to the point and motored away from Jordan Poirier, Danny Varin, and others. While Tanner’s 12th-to-first run in four laps was impressive, Chuck Hebing wanted attention too. After starting 22nd, Hebing was scored fourth on lap five. Three trips around Utica-Rome later, Hebing was in third.

At halfway, it was Tanner with a two-second lead over Danny Varin and Hebing. As the lap counter ticked away, Tanner got faster and faster, darting through traffic with ease. Behind him, Cory Sparks joined the battle for second between Varin and Hebing.

“After the heat, I was disappointed,” said Tanner. “I thought we had a really good car in hot laps, but we lost it there. We redrew 12th and I thought we were done for the night, but the guys gave me an awesome car and when they watered the top, it was perfect.”

With his runner up finish, Danny Varin snatched his second CNY Speedweek championship in a row.

In Sportsman action, Matt Janczuk slipped under Taylor Lamb at halfway, then held off Kyle Inman to win the caution-plagued 20 lap event.