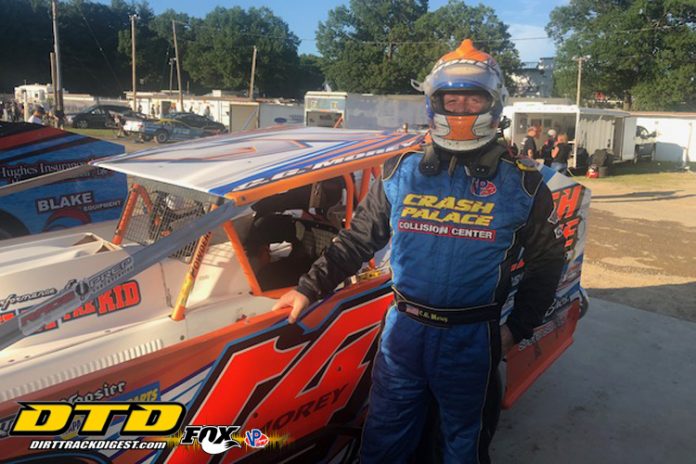 It was back at Albany-Saratoga on Friday night for us and another great night of racing greeted us and the many fans that came on the beautiful July night. As we wandered through the pits we stopped at the pit area of C. G. Morey. Morey and his No.14 are a familiar site on many DIRT Circuit tracks from Vermont where he lives to Florida. According ,,to the Rutland, VT resident he has run on most of them in the U.S. except for Ransonville. His favorite is Charlotte but he learned early on not to take a new car there said Morey.

We spoke with C. G. on his 54th birthday at Albany Saratoga on Friday. “I’m 54 going on 11,” said Morey, “crazy enough to keep on doing this.” Morey brings his girlfriend, Paula who had never been to the races until she started dating C. G. and his crew consisting of crew chief, Matt who has been with him for two years and certainly is a wealth of information. Morey races at Malta because as he puts it, he would rather run with the best. No doubt he chose the right track because the best in the area compete at Malta on Friday nights. C. G. has no modified wins but has many heat wins and also has a second at Orange County and a third at Fonda and that is what seems to keep him going. Sometimes he has a $5,000 motor in his No. 14, when his other motor is out being repaired. “I depend on this back up motor to keep me in the game,” says C. G. Prior to racing Modifieds he raced, snowmobiles and ATV’s where he placed 14th in the nation. C. G. finances his racing though his multiple business interests, Crash Palace, 802 Towing and Recovery, C.C. Properties, Two Brothers Speed Shop and Ultimate Custom Trailers. He also gets help from his brother, former racers, Todd Morey who owns Morey Motors. Sunday we spent the afternoon at the American Legion Post in Altamont where a fund raiser was being held for Craig Champion, the young man we told you about a few weeks ago who is battling cancer and going through intense treatments at this time. It was a wonderful sight to see the number of people that came out for Craig whose has been connected to racing through his parents Don and Diane as part of the Fonda Faithful that have their spot in the historic grandstand each week. As we said before, Don and Craig also worked at the front gate during the Compani/Hayes era of the track. Driver Cody Bleau was at the fund raiser with his parents and we shot this photo as we talked with them and learned that the Champions have been supporting Cody in his racing efforts for quite some time, financially and as cheering fans. Cody is a great young man and racer, another one that came out of the go-kart ranks and moved to Street Stocks where he raced at Lebanon Valley before making the move to Modifieds where he is now driving the No. 73 Greg’s Towing sponsored car, owned by Laudy Hoyenga. Also at the fundraiser was three past N.Y.S.S.C.A. presidents, Ed Biittig, Ed Barlow and Mark Krosky.

The Fonda Speedway Museum has announced the 2018 Hall of Fame inductions for the following drivers, Harvey Brundage, Don Hendenberg, Todd Hoffman, Norm Moyer, Bob VanAernam and Bob Vedder. Car Owners Bob and Karolann Grimm, Bob Simski, and Tommy Spencer. Track Contributors, Junior Bianco. Track Personnel Russ Berg and Terri Mohrman. Bill Fake-Track Pioneer award to Bob Whitbeck and the 3rd Annual Bruce Dostal Dedication to Fonda Speedway Museum Awards to Brian Hanaburgh, Ed & Betty Biittig and Ray Rogers. The annual awards ceremony will be held on Saturday, July 28th at 4:00 pm at the Fonda Speedway Museum, Fonda Speedway, Fonda, NY. The event is free and open to the public. We are honored to be part of this event and thank the Hall of Fame committee for this great award. To be part of this award along with Brian Hanaburgh founder of the first museum who made it part of his Fultonville McDonald’s Restaurant is something we cherish, Brian was a great supporter of racing at Fonda and we were honored to work with him as curators of the museum. Brian passed away earlier this year. Sunday we were back at The Ridge and what a surprise when we learned that one of the racing Proctor’s was behind the wheel of a race car for the first time. Jeff Proctor, youngest son of George, Sr. took out a No. 58 Limited Sportsman car that the family had sitting around and Jeff decided that having always wanted to try his hand at the family sport Sunday night at Glen Ridge was as good a time as any. Jeff ran the car around at the end of the field and when he was done, explained that, at 59, it was more tiring than he had thought it would be. As we close we want to thank Glen Ridge Motorsports Park for the award presented to us on Sunday at the track. The Excellence in Journalism award was announced at the banquet in January but we were in Florida so the track chose to present it this past Sunday. As we have said before we love and enjoy what we do and any recognition we receive as a result is an added plus.

In closing we send our condolences to the Kathy Tremont family. Kathy was the daughter of Ken, Sr. She lost her battle with MS on July 1st. Some may not remember Kathy as a racer but for us who witnessed her racing we all know she had a talent of handling the high banks of Lebanon Valley.