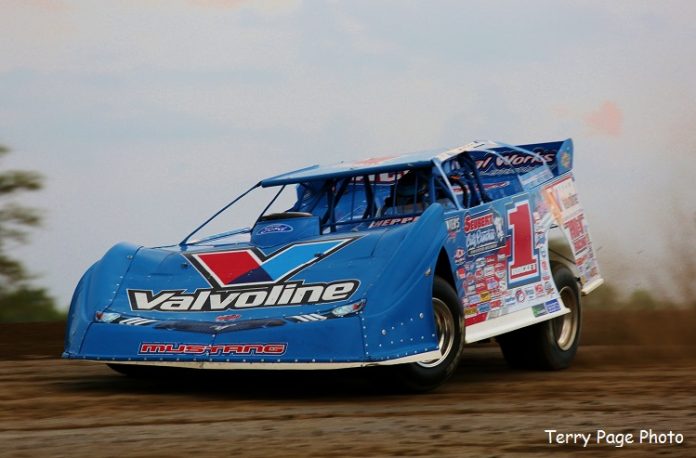 The defending World of Outlaws Championship team has collected three wins of the Series last four events: Federated Auto Parts Raceway at I-55 on June 30, Dubuque Speedway on Friday, July 6, and Black Hills Speedway on July 10. The one event he didn’t win, Sheppard collected a fourth-place finish.

“We’re just trying to win races now,” said President of Rocket Chassis Mark Richards. “We’ve had some bad finishes here that’s cost us and put us where we are. If we could wipe away three or four [poor finishes] we’d feel a lot better, but it is what it is, so now it’s just go for wins.”

Sheppard and his Rocket1 Racing team currently sit third in the point standings but just 34 points shy of a tie for first between Chris Madden and Mike Marlar.

“I’m sure it will [come down to World Finals],” continued Richards. “As tight as it is right now, it’s not a runaway for anybody. So, it’s going to be a tough race the rest of the way.”

While the points race may not be a runaway, Sheppard, sure enough, ran away with Tuesday’s Sears Craftsman Feature. Sheppard challenged polesitter and reining race winner Rick Eckert side-by-side for the first 19 laps of the 50-lap shootout. On lap 20, Sheppard secured the pass for the lead and the took off on a rocket ship. At one point even holding a more than 5-second lead ahead of the field.

“We had a really phenomenal car tonight,” said Sheppard. “It was a lot of fun to drive and the racetrack ended up being really racy. You could drive all over it… It was one heck of a race. Lapped traffic was tricky and then the track started to take a lot of rubber but all-in-all hopefully we got the bad luck shook off of our shoulders and we can string together some wins here. We have a fast car; the driver just has to get it done I guess.”

Marlar finished second after taking the spot on lap 25 from Eckert. From there, Marlar was never challenged for the position. With this finish, Marlar tied Madden in the championship point standings for the first time of the season.

“I was just telling Mark [Richards] that I’m glad I get to come race and have fun,” said Marlar. “Whatever the points are, they are, but we’ll just do the best we can every day. We do that points or not. It is fun though and it’s exciting for everybody that’s watching. We’re having a good time.”

Madden started on the outside of the pole but fell out of the top five in just the first 15 laps of the 50-lap event. Madden maneuvered back through the field to finish third behind Marlar which erased his two-point advantage tying the Series standings.

“Our car had some speed in it,” explained Madden. “We had a run-in (last week) and it got tore up so we had to get a new car out and we just can’t seem to find the balance in this thing. We’re really good if the race track is slippery. We were really good later in the race tonight. We were extremely fast. But in between there, we’re struggling… We going to work on this thing and keep working on it and get back in this points lead.”