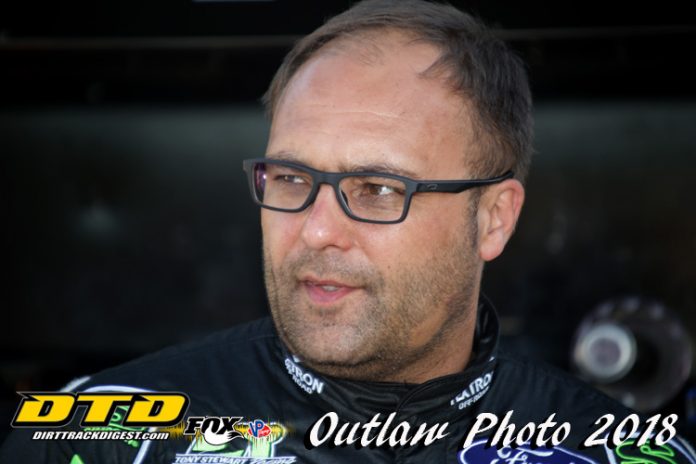 ATTICA, OH – Donny Schatz passed Joey Saldana on a Lap 21 restart and fended off Kyle Larson to win the Brad Doty Classic at Attica Raceway Park, his 13th World of Outlaws Craftsman Sprint Car Series Feature of the year. Larson, who started 15th, settled for second with Saldana completing the podium. There were a season-high 50 cars signed in.
Carson Macedo won the first of two Sears Craftsman Dashes to earn the pole for the 40-lap Feature, alongside Brent Marks, who won the other Dash. Macedo did a wheelstand on the opening lap, allowing Marks to get the jump into turn one and Schatz to take second down the backstretch.

Greg Wilson brought out the caution on Lap 2 as Marks paced the field, in search of his second career Outlaw victory. A pair of cautions for Lee Jacobs (Lap 6) and Aaron Reutzel (Lap 13) kept Marks out of traffic and allowed him to stretch his lead, but that didn’t stop the action behind him.

Saldana, pounding the cushion, got a run on Schatz down the backstretch and threw a big slide job in turn three to take the second spot by a nose at the line when the caution waved for Reutzel. The restart saw Schatz and Saldana exchange slide jobs, once again allowing Marks to escape.

Saldana wrestled the runner-up position away from Schatz on Lap 17, as Kyle Larson made his presence known moving into the top five from his 15th starting spot.

As the caution flew for Brad Sweet on Lap 21, heartbreak struck for race-long leader Brent Marks. Marks pulled pit side with a flat tire that was ailing his family owned No.19 machine for a handful of laps.

“I thought something broke on my car at first, but then I realized it was a flat. I know how these races go, so I’m not going to say I was going to win, but I felt like we had a good shot at it. That’s racing, though,” Marks said in good spirits after the race.

Marks’ misfortune awarded Joey Saldana the lead and lane choice on the double-file restart with 19 laps remaining. Saldana elected the bottom, giving Schatz the top. Saldana slid up the track, attempting to halt Schatz’ momentum, but the nine-time Series Champion turned his Textron Off Road sponsored, Tony Stewart Racing No.15 underneath to lead down the backstretch on Lap 22.

Schatz led the lap with Saldana and Larson nose to tail at the line. Saldana tried another slider the following lap, but Schatz once again, cool and smooth, turned it back underneath to maintain the lead. Saldana made another attempt for the top spot but allowed Larson to sneak by for second in the process.

Larson set his eyes on Schatz, following him on the cushion in turns three and four and going lower than him in turns one and two. While Larson was never farther than five car lengths back, he also never truly threatened to take the lead from the Fargo, ND native as Schatz went on to win by 1.273 seconds over the NASCAR star.

“I won the Brad Doty Classic,” was the first thing Schatz exclaimed after exiting his TSR No.15 in Victory Lane. “I did not expect the track to stay that good throughout the race. Hats off to my entire Textron Off Road team, they work extremely hard and make this car a lot of fun to drive,” Schatz added before thanking Attica Raceway Park for packing the stands on a Tuesday evening.

Kyle Larson praised Schatz for being the best at his craft. “Donny is so good around the bottom and the middle and he can still get up on the curb and rip it. He’s the best out here,” Larson said. “I was a little too patient, but it was a fun race and it’s awesome to race in front of such a great crowd.”

Joey Saldana, who just came back from the West Coast, was pleased to finish third and have speed all night. “To put it on the front stretch with these guys is awesome. I can’t thank Kevin Rudeen enough for giving me a great race car to race against the best two drivers in the world. Hopefully, we can keep it going this weekend at Eldora,” Saldana said.
Rico Abreu was strong all night, finishing fourth with Macedo fading to fifth at the line ahead of Daryn Pittman and 21st-starting Sheldon Haudenschild. Haudenschild’s charge was good enough to earn KSE Hard Charger honors.

After bringing out the caution on Lap 2, Greg Wilson stormed back to finish eighth, with 14th-starting David Gravel and Shane Stewart completing the top ten.

The World of Outlaws Craftsman Sprint Car Series continues its 40th Anniversary Season this weekend with one of the crown jewels of Sprint Car racing, the Kings Royal at Eldora Speedway. Action from ‘The Big E’ gets underway Thursday, July 14 with the running of the Jokers Wild. If you can’t make it to the track, be sure to watch every lap LIVE on DIRTVision.com!