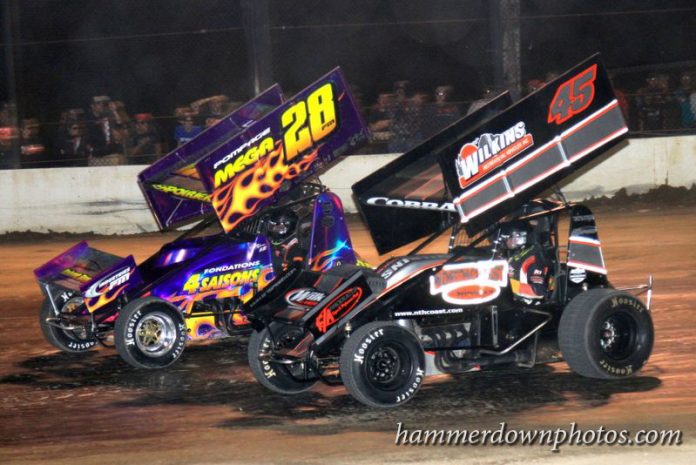 I used to be able to chase the Lucas Oil Empire Super Sprints CNY Speedweek very closely, but so many other things are encroaching on the time I’m able to invest into the racing ministry that it’s just not possible any more.

Nevertheless, I did make Brewerton Speedway Friday night to see an awesome race between Steve Poirier, Chuck Hebing, and Jason Barney. Once Poirier and Hebing broke away from Barney and lapped traffic came into play it was really exciting. Poirier was working the wheel pretty hard to keep a lapped car or two between himself and Hebing. In one instance Poirier was coming off turn four into the front stretch under the 14 car of Brett Wright with absolutely no room for a mistake. From my perch on the tower it looked like Poirier was going to side slap Wright’s mount, but somehow the 28 of Poirier managed to make the pass contact free. From my view it didn’t look like you could have slipped a dime between them.

Poirier was able to hold off the hard charging attempts by Hebing to take over and hold the lead amid many mutual slide jobs for the top spot. That’s why I love sprint car racing so much, especially when the drivers have so much confidence in each other and give so much respect to each other.

Jimmy Phelps earned his first Tracey Road Equipment Dirtcar Big Block Modified victory at the Demon, which carried over to another big win Sunday night in the 100 lap Super Dirtcar Modified series race at Utica Rome Speedway. Danny Johnson was pressuring him early on until past the midway point but the HBR team had Phelps on a rail for the big money.


After the dust settled in the final Donath MotorWorx Speedweek A-Main event Matt Tanner did a wing dance to celebrate his victory over Danny Varin and Chuck Hebing. Varin earned the Speedweek points championship by virtue of the consistency he was able to maintain in his finshes in qualifying heats and A-Mains throughout the five night series. In an unexpected turn of events Steve Poirier broke in the first lap of the final A-Main surrendering the championship. I dont recall the last time I’ve seen him have a mechanical failure in hundreds of races.

Saturday I elected to date my wife to celebrate our 34th year as a married couple. Some things are more important than racing. I have to say, if you like to get dressed up and go out for a fine meal I highly recommend Stone’s Steakhouse on Erie Boulevard in DeWitt. Locally grown Angus Beef and other meats, locally grown vegetables, a talented chef, an incredibly hospitable and friendly staff, plus some nice ambiance make this place a five star restaurant in my opinion. No, I’m not getting perks to share this, I’m just sharing my honest opinion because its an impressive place for a date, and keeping the courtship alive makes a marriage thrive.

At a few recent driver’s meetings in the midst of one of the hottest Julys on record I’ve found myself reminding the drivers present to stay hydrated. Every time I think about this I’m reminded of the biblical references of water symbolizing the Holy Spirit.

“For by one Spirit we were all baptized into one body— whether Jews or Greeks, whether slaves or free—and have all been made to drink into one Spirit.
I Corinthians 12:13 NKJV”

Every believer receives the Holy Spirit as a seal of their redemption the instant they are born again.

“Now He who establishes us with you in Christ and has anointed us is God, who also has sealed us and given us the Spirit in our hearts as a guarantee.
II Corinthians 1:21‭-‬22 NKJV”

The Apostles received the Holy Spirit directly from Jesus Christ right after being commissioned to establish His church, just before He led them out of Jerusalem to witness His ascension.

“And when He had said this, He breathed on them, and said to them, “Receive the Holy Spirit. John 20:22 NKJV”

As the Apostles went about praching the Gospel of the Kingdom of Jesus Christ they also were empowered to transfer the
anointing of the Holy Spirit by the laying on of hands.

“Then they laid hands on them, and they received the Holy Spirit.
Acts 8:17 NKJV”

Others were filled the moment they turned away from their sins and received Jesus Christ as their Messiah.

“Then Peter said to them, “Repent, and let every one of you be baptized in the name of Jesus Christ for the remission of sins; and you shall receive the gift of the Holy Spirit. Acts 2:38 NKJV”

This leads me to ask, do you know the Holy Spirit? Most view or refer to Him as an “it”, as some mystical force or unseen power. In truth, Holy Spirit is third Person of the Triune God of the Bible. He is God, present on the earth, manifesting Himself to and through the believer. He is here to demonstrate that the Father did in fact send Jesus Christ to the earth to make one final atonement for humanity, reconciling us to Himself through His own selfless act of love.

Jesus promised this in His prayer the night He was betrayed, which John recorded in his Gospel. In this prayer Jesus asked to be restored in the fullness of His glory. He then prayed for His disciples to be kept from the evil one. After that He prayed for you and me, speaking of those who would believe on Him because of the Apostolic teachings.

““I do not pray for these alone, but also for those who will believe in Me through their word; that they all may be one, as You, Father, are in Me, and I in You; that they also may be one in Us, that the world may believe that You sent Me. And the glory which You gave Me I have given them, that they may be one just as We are one: I in them, and You in Me; that they may be made perfect in one, and that the world may know that You have sent Me, and have loved them as You have loved Me.
John 17:20‭-‬23 NKJV”

The glory Jesus is talking about is the luminous manifested presence of God, or as other scriptures describe, Holy Spirit within and upon us. To know Him is to know the Person, Power, Glory, and Presence of Almighty God. We should ask to be saturated in His presence daily until we know Him intimately.

“But you shall receive power when the Holy Spirit has come upon you; and you shall be witnesses to Me in Jerusalem, and in all Judea and Samaria, and to the end of the earth.”
Acts 1:8 NKJV”

He promised we can dwell in His presence and demonstrate His power as a witness that Jesus Christ is alive, and His love still abounds toward humanity.

We are here to serve you, in Word, in demonstration and power, and in the love of God through which faith works. If you ever need anything message us on Facebook at Finish Line Chaplain, Kevin Westcott Ministries, or email us the old way at flchaplain@windstream.net

Have a blessed week, well see you at the races.