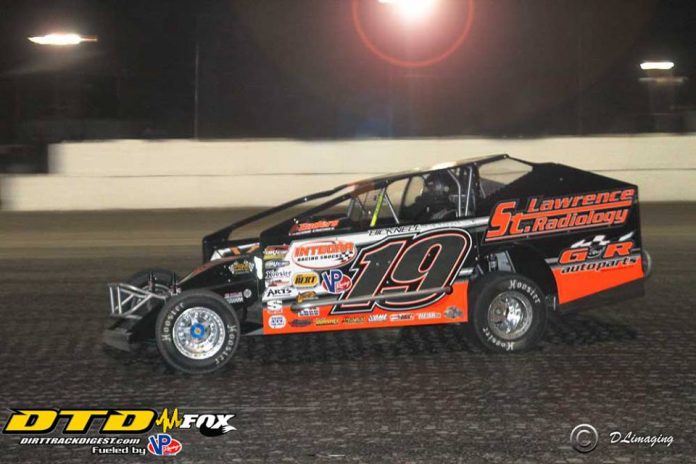 CORNWALL, ONT – The biggest event of the season is at our doorstep as the Race for the Cure 150 will be run this Thursday evening with 150 laps counting for the DIRTcar 358-Modified series, 50 laps for the Sportsman, 25 laps for Pro-Stock and Eastern Ontario Vintage Club on St.Lawrence Radiology and TAS Racing night.

The Race for the Cure 150 will be round 1 of the DIRTcar 358-Modified Series for the North Region and it will be the highest paying event of the season in Canada with the winner’s share being $12,000 and 500$ to start. A list of bonuses such the halfway, hard luck, hard charger and fast time award were added making the total to nearly $40,000 to be given!

With a lot of money on the line, the interest for this race has been incredible. The list of confirmed participants has been growing as defending race champion Tim Fuller, last Sunday’s Super DIRTcar Series Matt Sheppard, Mat Williamson, Lance Willix, Kevin Poitras, Chris Herbison, Luke Whitteker, Bobby Herrington, Ryan Arbuthnot, Stephane Lafrance in a second car from Corey Wheeler along with Quebec drivers such as Steve Bernard, David Hebert, Michael Parent, Yan Bussiere, Steve Bernier, Alan and Alex Therrien are part of the drivers confirmed. Promoter Raymond Lavergne was waiting confirmation from many more drivers.


You cannot count out the group of local runners such as Chris Raabe, Carey Terrance, Corey Wheeler, Joey Ladouceur, Louie Jackson, J-F Corriveau, Mario Clair, Kayle Robidoux, Dany Gagne and many others. If more than 40 modifieds shows up, a special 15-lap non-qualifier will be added to the night, a good incentive to attract a few extra drivers.

Along with the Race for the Cure 150, the Next Level Home Improvement Sportsman will have 50 laps, the Alexandria Home Hardware Pro-Stock will have 25 laps with the Eastern Ontario Vintage Club completing the night, plus the possibility of a 15-lap non-qualifier for the 358s depending on the number of cars. Several invaders are expected in the Sportsman and Pro-Stock boosting our regular numbers.

The pit gate will open at 3:30pm access price at 45$; general admission will be opening at 5pm with entry prices set at 35$ for adults, 20$ for seniors 65 years and plus and kids 16 years and under can enter for 5$. Time Trials are set for 6:30pm with heat races scheduled to start at 7pm.