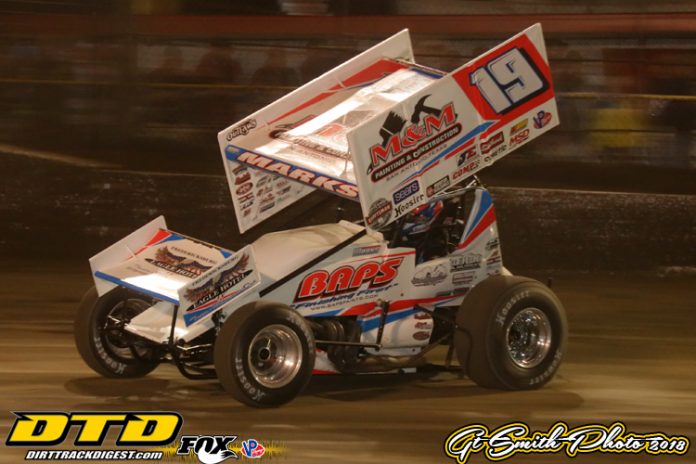 ATTICA, OHIO – When you read the headlines from the 30th Annual Brad Doty Classic at the racy Attica Raceway Park you’ll notice some familiar tales.

Donny Schatz won his 4th Classic, a dude they call “Young Money” was no surprise in second and while he’s had more downs that ups the past few years, Joey Saldana shouldn’t surprise the sprint car faithful with his third place finish.

Over the years, folks will be talking about those three and rightfully so, they did indeed earn the accolades.

But, this writer would like to take you to the halfway mark when Myerstown Pa. Brent Marks took his M&M No. 19 pit side with a right rear flat tire. What makes this a story was that Marks led every lap up until the Hoosier lost air.


Marks was running so good that he was keeping Schatz at bay and if this story played through it was going to be career highlight for sure. However, I wish I could keep going on telling you about a feel good story but in all reality Marks’ run will go down in time as a simple statistic.

Shortly afterwards approaching Marks’ pits there wasn’t any cussing, no throwing of the helmet or tools, not even a frown. Brent Marks was all smiles and busy signing autographs to the seekers.

“Yea I’m disappointed but that’s racing,” he just said plain and simple. “It sucks but the most important is that we know we had a fast race car. I just wanted to drive the smartest race I could and see where we could finish or maybe hang on to get a win.”

Attica had many grooves and was fairly smooth and clean so Marks was perplexed on the tire.

“It was cut which was unusual as this place is clean, there never anything on the track that would cut a tire so I am not sure,” he went on. “I was actually just trying to stay smooth and not abuse the right rear. It was a little treacherous up on the cushion so I was doing all I could to get to the finish.”

He was good up top and down low, he had a real good car and a car that could win. “

What we can take from tonight is that we are getting to where we need to be, I still think we are a little behind but getting there,” he continued. “We have passed a lot of cars this year which is good but that also means that we still need to improve on our times and run more dashes.

“Just like tonight, we put ourselves in the dash and had a chance to win so we need to do more of that,” noted the sophomore World of Outlaw traveler. “We will keep digging to get more speed earlier in the night.”

Tonight is a good example on who Brent Marks is, this is a man who is enjoying the opportunity to be on the road. Even with a bad hand that was dealt there is no folding.

“I am enjoying being with the Outlaws. I mean it is tough but this is where I want to be,” he said with confidence in his voice. “It’s a little different that what I thought it would be. It’s the first time I was away from my wife and kid so that was a change. But now in the second year its been so much better cause now we all know what its all about.”

The final rundown shows Brent Marks 23rd out of 24 starters. Yes, there was still half a race to go but I, along with a few more, would have like to seen what this ending was going to be with the No. 19 still on the track.

As noted, that Mr. Schatz won his fourth Doty Classic and he truly cherishes these wins. He’s a history guy and a Brad Doty fan.

“I won the Brad Doty Classic again…Woooo!” he exclaimed, “I’ll tell you I really didn’t need those cautions, I wanted to race to get into traffic as I wasn’t sure what I needed to get Brent. It’s too bad he had that flat but I wanted to get into the slower cars to make the move.”

He kept going, “I couldn’t believe how good the track stayed, especially up top. You could run anywhere and I was just hoping I was making the right decisions and I guess we did.”…

Larson came from 15th to get to second and while the standing room only crowd was hoping for a challenge his run peaked there.

“When I go to second I was hoping to have something for Donny but just couldn’t get a run or have the slower cars play the way I needed,” he continued. “I think I might have been better in three and four but he was better than I was at the other end.

“Still it was good to put on a show for this big crowd, that’s what we want to do each night.”

Then Larson went on about the called jump during his heat that put him third on the start instead of the pole, “I got hosed on that call.”…

For Saldana he picked up a ride with Kevin Rudeen’s operation and he was emotional in victory lane.

“To put this car on the front stretch is a pretty big deal. They still let me be a husband and a father which is so nice,” he said with a crack in his voice.  “They have given me a car to race this year and I am so grateful. To be here with the absolute two best in the business truly says something.”

A total of 50 sprints filled the pits making this event the biggest WoO field so far in 2018….

Cale Conely had a scare in his time trail run when he hopped the cushion during time trails and flipped wildly. He took out the turn four caution lights and some catch fencing. The good news was that he was fine, the car was pushed back to the pits and he was ready for the heat event…

Andrew Palker had a heartbreak during his heat when he spun on the final corner of the final lap while running in the final transfer spot. He ended up as a DNQ.